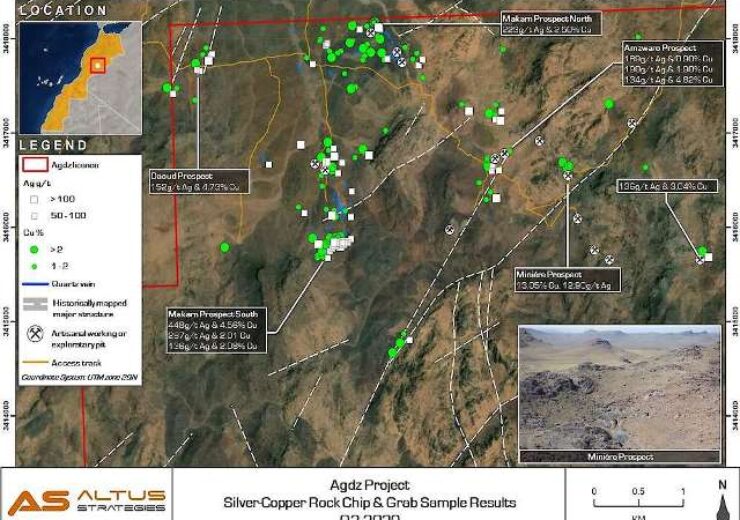 The company said that the EIA approval for the project represents ‘a key milestone’ to convert the current exploration licence to a mining licence.

The project is located 14km southwest of the Bou Skour copper and silver mine in the eastern Anti-Atlas of Morocco.

The approval received from the Ministry of Interior, Administrator of the Draa Tafilalet Region and Regional Centre of Investment, will grant a future mining licence and allow Altus to undertake mining activities thereafter. It is valid for five years and can be renewed later.

Separately, Altus, the University of Orléans and France-based geological survey BRGM have collaborated to generate new silver and copper targets based on the latest predictive mapping techniques.

The analysis was undertaken on all surface data compiled by Altus that include surface rock and trench results, mapping data and gamma spectrometry and ground magnetic survey results.

Altus said that several broad targets were identified from the study, namely the Amzwaro, Makarn, Minière and Daoud prospects.

It also said that one of the priority targets is around 1km long and strikes in a northeasterly direction in the northern part of the Makarn Prospect.

The 59.7km2 Agdz project that comprises four contiguous licence blocks in the Souss-Massa-Drâa region of the Anti-Atlas mountains of central Morocco, is located in a highly prospective region for the discovery of copper and silver deposits.

In June this year, Altus Strategies has signed a non-binding agreement with Stellar Africa Gold for the sale of its Prikro and Zenoula gold projects in Côte d’Ivoire.