ADB, partners commit to light up and power Sahel with the Desert to Power initiative 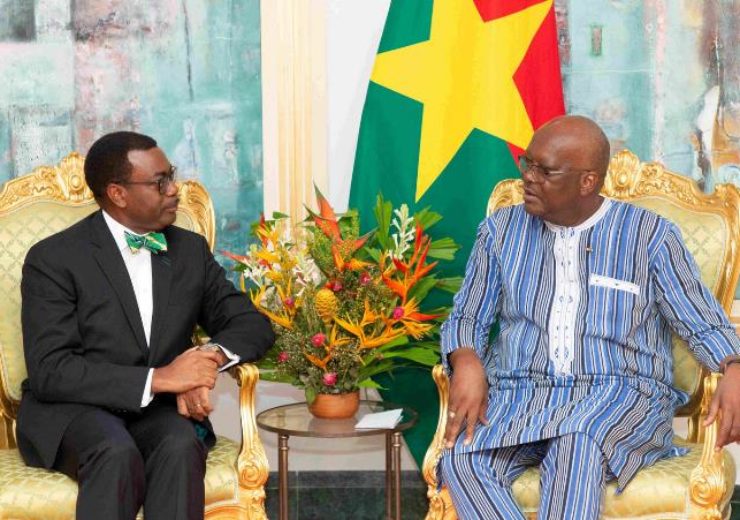 Image: The Bank will present its Desert to Power initiative to heads of state and government. Photo: Courtesy of African Development Bank.

Dr. Akinwumi Adesina, president of the African Development Bank, has arrived in Ouagadougou, capital of Burkina Faso, ahead of the G5 Sahel Summit, and was received by Burkina Faso’s president, Mark Roch Christian Kaboré.

The Burkinabe president applauded the Bank’s Desert to Power initiative, and also highlighted his country’s excellent relationship with the Bank, expressing his thanks for the portfolio of projects implemented. The Bank president is an invited guest at the G5 Sahel Summit of heads of state and government on 13 September.

President Adesina praised President Kaboré’s commitment, vision and leadership in agreeing to host the summit. He stressed the importance of political will in the success of the “Desert to Power” initiative, whose goal is to guarantee universal access to electricity for over 60 million people through solar energy. It will also provide an opportunity to strengthen the south-south partnership as well as stimulate worldwide involvement in the initiative beyond the G5 Sahel countries. At least $20bn must be raised from development partners.

The two presidents also discussed issues relating to the cotton sector, and agreed on a policy of strengthening the domestic cotton industry, so important for the economy of Burkina Faso. The African Development Bank’s president also expressed his sympathies for the terrorist acts that Burkina Faso has recently suffered and reaffirmed the Bank’s support to the country.

During the summit, the Bank will present its Desert to Power initiative to heads of state and government. President Adesina has drawn attention to the paradox that one of the world’s sunniest regions lacks access to electricity: “Now, more than ever, cooperation and cross-border trade in energy are essential to maintaining a secure supply over the long term given the challenges of climate change,” he said, adding that “in Burkina Faso, significant steps have been taken with the Bank-supported Yeleen rural electrification project.”

As part of its electrification strategy for Africa, the Bank is firmly committed to accelerating access to high quality, low cost energy for the continent’s people. Critical network connections have been approved by the Bank’s Board: Mali-Guinea, Nigeria-Niger-Benin-Burkina Faso and Chad-Cameroon.

The “Desert to Power” initiative spans 11 countries: Burkina Faso, Eritrea, Ethiopia, Mali, Mauritania, Niger, Nigeria, Sudan, Djibouti, Senegal and Chad. It will have a significant impact on the standard of living of 250 million people. The goal is to install 10 gigawatts of solar capacity between now and 2030, which will take a big step towards the achievement of the Bank’s High 5 goals, since access to energy cuts across all Africa’s development needs. It is also in line with the Sustainable Development Goals, the Paris Agreement on climate change and the Africa Renewable Energy Initiative.

The G5 Sahel is a strategic framework for regional cooperation created in 2014. It includes Burkina Faso, Mali, Mauritania, Niger and Chad. The G5 Sahel countries are convinced of the interdependence between security and development, particularly in the service sector (energy, transport, telecommunications, and hydraulics).