The first turbine at Vattenfall's Horns Rev 3 offshore wind farm, located in the North Sea, off of Danish coast, has been installed. 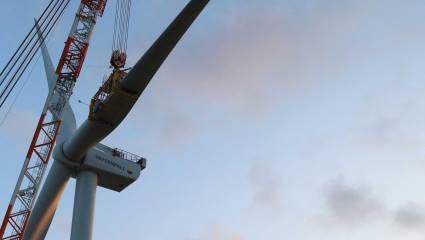 Vattenfall stated that when fully commissioned, the Horns Rev 3 offshore wind farm will generate enough clean energy to power 425,000 Danish households, while increasing overall electricity production by 12% in the country. It is also expected to offset more than 580,000 tonnes of CO2 and over 13,000 tonnes of SO2 emissions per year.

The 406.7MW offshore wind farm will include a total of 49 wind turbines and the first turbine had been installed on 19 July.

Each turbine will have a capacity of 8MW and they are being supplied by MHI Vestas. The V164-8.0MW turbines will each turbine have a rotor diameter of 164m and the total turbine height is 187m.

Horns Rev 3 is located 20km off the coast. The turbines are being installed on grounded monopiles that have been driven between depths of 25-39m into the seabed. Each monopile is between 40-50m in length with a diameter of 6.5m. Each monopile piece weighs 610 tonnes and has a 32m transition piece secured. With the turbine installed, the total weight reaches 1500 tonnes, as claimed by Vattenfall.

The turbines are being shipped from Port of Esbjerg on the west coast of Denmark. Turbine installation is expected to continue this November and the wind farm is expected to begin operations by early next year.

Horns Rev 3 project director Martin Zappe said: “We are pleased to have started installing the turbines at Denmark’s next offshore wind farm. Horns Rev 3 is a significant step towards a fossil free future for both Vattenfall and Denmark.

“The construction of the wind farm is a large operation that involves many ships and different jobs. We are very careful about the safety of the staff, and I’m happy that the work is progressing well.”