Many countries across South America are looking to ramp-up investment in wind power production. We take a look at the continent's top five producers 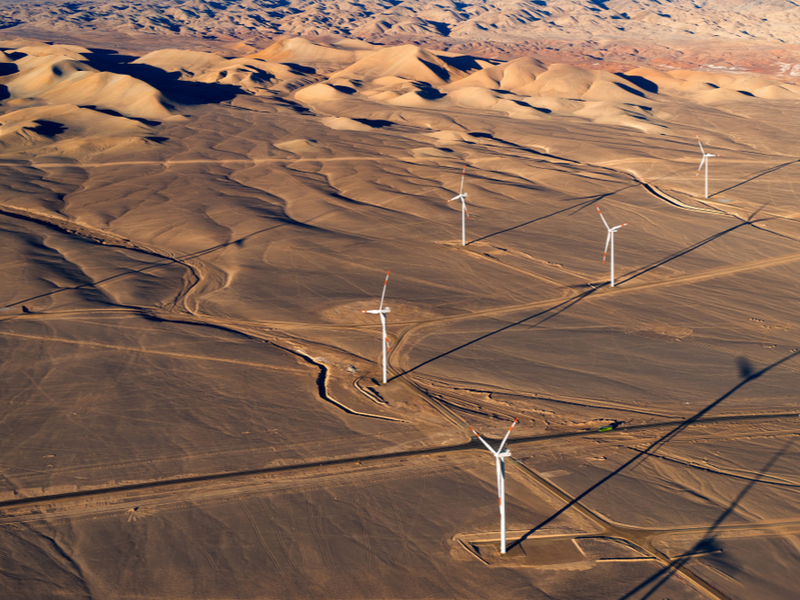 South America's wind power capacity in 2018 was 18.6GW, but investment is being ramped-up in the renewable source

With its comparatively low-density population and large distances between towns and cities, wind power production offers huge potential for supplying the needs of inhabitants across South America.

The continent’s wind power capacity in 2018 was 18.6GW. Although this sector is dominated by Brazil, countries such as Chile and Argentina are now looking to invest aggressively in this clean and renewable source of energy.

However, South America, as a whole, is yet to fully harness the full potential of wind power, with hydroelectric power currently leading the way in renewable energy production across the continent.

Brazil’s wind power capacity had reached 15.5 gigawatts (GW) in 2019 (up from 14GW in 2018), making it South America’s top wind power producer. While it has made a significant leap since the previous year, wind energy still only ranks fourth in the country’s energy mix —  delivering 8% of its 162.5GW renewable power output.

It has been predicted that by 2025, Brazil will generate 69% (31.6GW) of Latin America’s total installed wind capacity — and become the leader for turbine manufacturing and supply chain assembly in the region. Another factor contributing to Brazil’s growth in wind power generation will be international manufacturers, such as GE and Alstom, launching wind turbine facilities in the country.

Chile has the potential to produce 44GW of wind power, according to a study by global renewable energy firm Mainstream Renewable Power. Chile’s heavy reliance on energy imports has fuelled the current high demand for renewable energy. Additionally, huge increases in energy prices due to the country’s summer months giving rise to long dry spells have driven the need for locally-produced renewable power sources.

With the prospect of Chile’s Non-Conventional Renewable Energy Law, also known as Law 20/25, being adopted, companies having a capacity of more than 200 megawatts (MW) of installed capacity need to generate 20% of the country’s power from renewables by 2025. The law’s approval could establish a 2GW market for wind power within the following decade. Chile’s wind power capacity has increased to nearly 1.8GW in 2020. Enel Chile, the country’s biggest electricity company, has wind power capacity of almost 600MW.

Uruguay has become a leader in the production of renewable energy within the region, with 60% being generated by hydropower, and the remainder divided by solar, wind and biofuels. The country possesses a surplus of electricity due to its capacity for renewable energy generation and, in 2018, exported $85 million worth of electricity to neighbours Brazil and Argentina. It plans to further integrate wind power, and has already auctioned 500MW of wind energy projects with another 500MW in the pipeline.

Uruguay is also one of the best-served nations in the region, with 99.4% of Uruguayan homes connected to the grid. The government’s plan is to make this a full 100% by 2030, and it expects to have a 2GW wind power capacity installed within the same timeframe. In 2018, Uruguay’s wind power capacity was 1,516MW, equating to 36% of the country’s energy mix.

Argentina has an ideal platform for wind power production, with around 75% of its surface area is swept by strong winds. Between 2016 to 2019, the Argentinian government approved 6.5GW of renewable energy projects, attracting almost $7.5 billion worth of investments. About 5GW of this capacity is currently in operation.

When all projects are fully operational, renewable energies will contribute about 18% of Argentina’s total power supply — an impressive achievement from 1.8% in 2016. This will help prevent about 220 million tonnes of CO2 emissions over the next two decades.

The North American AES company’s wind power project, Neuquinos I Winds, in the province of Neuquén has a total of 29 wind turbines to be erected and operational by June this year. Spurred by an investment of $140 million, the project will have the capacity to produce 100MW of electricity. In 2018, Argentina had a wind power capacity of 722MW.

In 2016, Peru’s wind power potential was as high as 22.45GW, but just 239MW was being generated by four wind farms. Two years later, this capacity rose to 375MW, which will see an additional increase this year with two more onshore wind farms beginning commercial operations along with a biomass power plant. Combined, these are expected to produce about 39MW of non-conventional renewable energy, according to a Peruvian government statement issued in March 2020.

Developed by Spanish company Grenergy Renovables SL, the two 18.4MW wind power projects named Duna and Huambos have attracted more than $47 million in investment. They will be operating in Chota, which lies 2,400 metres above sea level, in the province of Cajamarca.