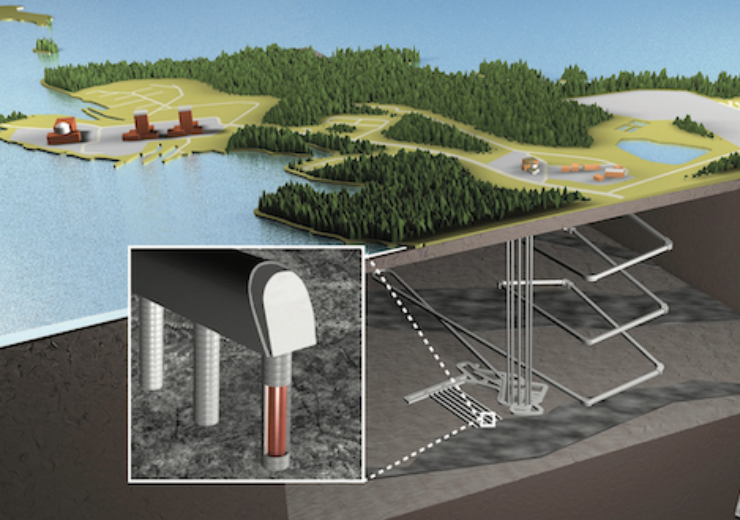 Site investigations for hosting a deep geological repository, known as the ‘final disposal facility’, were started in the 1980s by Teollisuuden Voima. In 1994 the Finnish Parliament passed a law preventing the export and import of spent nuclear fuel. Hence, the other nuclear power plant operator in Finland, Fortum, joined the final disposal project and a company dedicated for nuclear waste management, Posiva Oy, was established.

The first objectives of the company were to prepare an application for a political decision-in-principle (DiP) for geological final disposal of spent nuclear fuel and to find a suitable site for the final disposal facility.

In Finland, licensing of a nuclear facility is done according to the Nuclear Energy Act through a stepwise process beginning with a decision-in-principle, continuing with a construction licence and culminating in an operating licence after completion.

The site to host the final disposal facility was selected in 1999, and the selection was approved by the municipality of Eurajoki. An application was made in 2000 for a DiP to construct the final disposal facility and an encapsulation plant at Olkiluoto, introducing a so called KBS-3 method with crystalline host rock as the disposal concept. The DiP was made by the Finnish Government and ratified by the Parliament in 2001.

The DiP included a requirement that the preliminary site investigations made above ground should be confirmed by site investigations at the actual disposal depth. Therefore ONKALO®, an underground research and rock characterisation facility, was constructed in 2004–2012. ONKALO® has been constructed under the supervision of the Nuclear Safety Authority (STUK), because from the early planning phase it has been designed to become a part of the final disposal facility for spent fuel. The site confirmation studies were continued until the disposal level — 420-430m below sea level — was reached in 2010.

By constructing ONKALO, rock construction methods, including a drill-and-blast excavation method and grouting of groundwater flows, were developed especially for the final disposal facility to avoid damage of the bedrock and unnecessary disturbance of the groundwater conditions. Also, a specific rock suitability classification method (RSC), was developed and tested iteratively during the construction work to assess rock suitability and to provide input information for design of the final disposal facility.

A unique technology called Posiva Flow Log for locating fractures and measuring groundwater flows in those was developed and has now been used for over 20 years not only in Olkiluoto, but by several other countries and industries.

The principle of geological final disposal is to isolate the nuclear waste from the biosphere until its radioactivity has decreased to an insignificant level.

Safety of the final disposal concept in Olkiluoto is based on the KBS-3 concept, which consists of crystalline bedrock as the natural barrier and an engineered barrier system (EBS). The EBS components are a disposal canister, a bentonite buffer, a bentonite backfill of the deposition tunnels, a deposition tunnel plug and closure of other underground openings in the final disposal facility.

The primary barrier to contain and isolate spent nuclear fuel from the biosphere is the copper-cast-iron canister. Buffer surrounding the canister limits the movement of groundwater from the bedrock to the canister and protects it from rock movements. Backfill and closure of the deposition tunnels prevent water flowing in the tunnels and the end plug keeps the backfill in place.

The disposal concept has been studied iteratively along with site studies and developed in detail by defining requirements for its components, testing material performance at different scales (laboratory, field scale and in ONKALO®) and performing manufacturing tests with several potential suppliers of the EBS components.

Posiva applied for a construction licence for a final disposal facility and for the encapsulation plant in 2012.

The application included a safety case, TURVA-2012, to address the safety of the final disposal of spent nuclear fuel in Olkiluoto. The construction licence was granted by the Finnish Government in 2015.

Posiva is currently building the encapsulation plant and the final disposal facility. The construction work has proceeded well, and the encapsulation plant will be ready for installation and commissioning of the systems in 2022/23. Construction of the first five deposition tunnels is also underway in the final disposal facility.

Posiva is the first company in the world to apply for an operating licence for encapsulation and a final disposal facility. The application was submitted to the Finnish Government at the end of 2021.

The Ministry of Economic Affairs and Employment will review the operating licence application and eventually forward it to the Council of State for approval. STUK will conduct a safety assessment of the application and is in charge of the oversight of the construction and commissioning of the nuclear facility. The actual final disposal activities are due to start in the mid-2020s.

According to Posiva’s CEO and president, Janne Mokka, submitting the application for the operating licence is a significant milestone for the entire nuclear energy sector.

“We can all take pride in the long-term and responsible approach of the various parties in the use of nuclear energy in Finland, with Posiva now having the capability to launch the first, demonstrably safe final disposal operation of spent fuel in the world here in Olkiluoto. We have a solution,” Mokka says.

“The work carried out for several decades to demonstrate long-term safety and develop the final disposal facility concept ONKALO® to suit the conditions of Olkiluoto has now been finalised and we can concentrate on the installation of equipment in the encapsulation plant and the final disposal repository, commissioning of the facility and preparations for operational activities,” he adds.

“In addition to engaging in the safe operational implementation of final disposal in the future, we are developing our concept further towards a more industrial solution and support the vision of our subsidiary Posiva Solutions of turning the expertise gained during the project into a successful Finnish export product,” Jalonen says.

Posiva Solutions Oy is a subsidiary of Posiva Oy and focuses on the sales of Posiva’s knowhow accumulated from design, research and development efforts in the final disposal of spent nuclear fuel during the last 40 years. Recently the company announced it will study the general criteria for Lithuania to dispose of its used nuclear fuel. Under a year-long contract Posiva Solutions will “discuss the principles that will ensure the safety of used nuclear fuel and long-lived radioactive waste storage in a geological repository, the methodology for long-term safety assessment, the methods to be used for safety assessment, software and data,” according to Ignalina.