A robotic-assisted handling system, which is being developed in the Virero project to categorise and sort radioactive waste components, is expected to be completed by the end of 2023 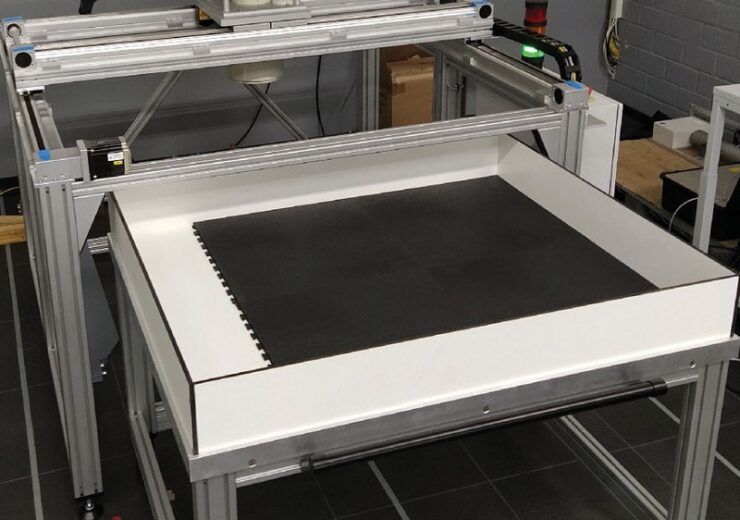 Prototype for volumetric measurements and radiological characterisation of the waste parts

As reactors reach the end of their lives, it is critical to optimise their nuclear waste streams to manage limited space in repositories.

Framatome’s Virtual Remote Robotics (Virero) team is testing advanced robotics that will allow waste professionals to categorise and sort waste using augmented virtuality, machine learning and intelligent automation. This project is in partnership with the Institute for Factory Automation and Production Systems (FAPS) of the Friedrich-Alexander-Universität, Erlangen-Nürnberg (FAU), and Aachen Institute for Nuclear Training GmbH (AiNT).

A case study for its use is the disposal of negligible-heat-generating waste in Germany. Under the Nuclear Waste Management Act of the Reorganization of Responsibility, German energy companies operating nuclear power plants are authorised and obliged to send this type of residual material to repository facilities under the condition that the waste is properly packaged. However, the Konrad repository, where this waste will ultimately be located, is still under construction. BGZ Gesellschaft für Zwischenlagerung GmbH is charged with interim storage of the waste until the permanent repository is complete.

During this interim period, storage is at a premium. As a result, volume optimisation of the incoming waste is critical. Virero addresses this challenge.

Conventional systems available today are not flexible enough to adapt to a variety of different operating conditions and are not explicitly designed for use in a nuclear environment. They face challenges for in breaking up and dividing packaged waste. The highly individual characteristics of the various parts pose more challenges.

The system reduces the waste volume by disassembling and re-sorting radioactive waste material for different dose-rate levels. The radiological characterisation is followed by spatial activity reconstruction and this generates basic information for the waste treatment. Waste with high dose rates can be identified and separated. The analysed radioactive waste can be semi-automatically sorted and disassembled, with the process controlled through a virtual environment interface, then documented in detail for final storage.

The Virero project focuses on operational waste such as filter cartridges, bag filters or metallic waste. Separating and sorting the waste is based on a multitude of spatially resolved dose rate measurements or spatially resolved gamma spectrometric measurements. Coupling innovative nuclear radiation measurement technology with the industry-proven laser scanning technology in the Virero system results in a reconstruction of all the waste.

Since Virero is an ongoing R&D project, the development is carried out on prototypes of the future system. The final system will be redesigned based on findings from the research project.

To radiologically characterise waste, the material must be removed from the waste barrel. Several robotic kinematics, sensors and peripheral systems, such as grippers and tools for separation, are integrated into the test facility to handle the waste. Large pieces are cut up with mechanical cutting shears and then spread out with the other waste for radiological characterisation on a measuring table.

Exact object and environment representation is the basis of robot-based teleoperation. Handling tasks during robotic semi-automated sorting require an exact representation of the environment and the location of waste parts in the working area of the sorting system.

An exact representation requires high image quality and low transmission latency to enable the movable waste parts to be sorted as a digital twin within a virtual reality (VR) environment.

The geometric characterisation of the waste to be sorted is carried out using a 3D line profile scanner with an optical scanning rate of up to 5kHz and a height resolution of approximately 25µm.

For a complete recording of the material to be measured, the line scanner moves over the measuring table in several paths, and the recorded height profiles are transferred into a common-point cloud.

Laser scanning of each piece of waste takes place instantaneously, prior to the radiological characterisation.

After the laser scanning has been completed, radiological characterisation begins.

In Virero, radiological characterisation methods are being developed beyond the current state of science and technology.

For radiological characterisation, Framatome’s partner AiNT, is testing the use of three gamma spectrometric detectors of varying sensitivity and a Geiger-Müller counting tube. The gamma spectrometric detectors are a highly sensitive HPGe semiconductor detector (relative photopeak efficiency of 40%), a CeBr3 scintillation detector and a NaI (Tl) scintillation detector. These detectors are designed for low to medium local dose rates.

In contrast to the detectors, the Geiger-Müller counting tube offers no energy resolution. However, it can be used for LDR values up to 10Sv/h, so that even highly active waste can be characterised.

The radiological measurements are performed in a collimated manner at discrete measurement positions, whereby the radiation signal from individual spatial partitions on the measurement table is measured in each case. Three different collimators can adjust the field of view for each detector. This allows users to vary the size of the partitions to be measured. Hard lead is the collimator material.

Teleoperated sorting according to existing radioactivity requires reconstruction of the activity inventories of the waste on the table from spatial and radiological measurement data. Waste components may be contaminated at specific points or over a large area on the surface or their activity may be almost homogeneous (in the case of used filter cartridges, components activated by neutrons such as reactor core internals, etc).

To reconstruct the activity, nuclide-specific net pulses registered in the detector during the measurement are determined from recorded gamma spectra. Photopeak efficiencies are also required, to quantify the likelihood that radiation emitted from a waste piece was detected.

Photopeak efficiencies are simulated using Tracer, an in-house development of AiNT. Tracer considers gamma self-shielding of the waste and the activity distribution. It uses volume information obtained from the global point cloud of the 3D laser scan.

In order to grip waste, a gripping pose is estimated for the teleoperated or partially automated handling robots. This requires fast, reliable and unambiguous detection of the waste as a point cloud. This is created via a 3D laser scan. Additional point clouds from the 3D cameras are integrated into the system from different perspectives. A corresponding software pipeline for spatial characterisation is developed using object localisation and pose estimation methods based on point clouds.

Information for the correct representation of the waste to be manipulated is obtained using integrated 3D cameras. By superimposing information about the dynamically captured pieces on representations of static components and moving robot systems, an ‘augmented virtuality’ is created.

One challenge is user-friendly representation of the captured objects. By using several point clouds, complete representations of dynamically sensed objects can be displayed, regardless of the operator’s viewing angle. However, users can be affected by noise and irritated by direct representation of the point clouds in virtual reality. So the ergonomics of a virtual reality application are improved using rendered representations of dynamic objects in the form of CAD data, which are displayed in place of point clouds. To identify and determine the pose of objects, pipelines from several machine learning and intelligent automation methods are evaluated and developed at FAPS.

A central task in the Virero project is further development of this approach so many strongly varying parts can be recognised efficiently.

Photo documentation can be produced manually or automatically by the operator within the VR environment.

In the manual case, an image is taken by the stereo camera using the AV menu in the VR. The operator can select an optimal image position for the waste part and the chosen camera. The captured image is stored with the data from radiological characterisation and any other data (eg dimension and weight estimates) and automatically assigned to the selected barrel for sorting. 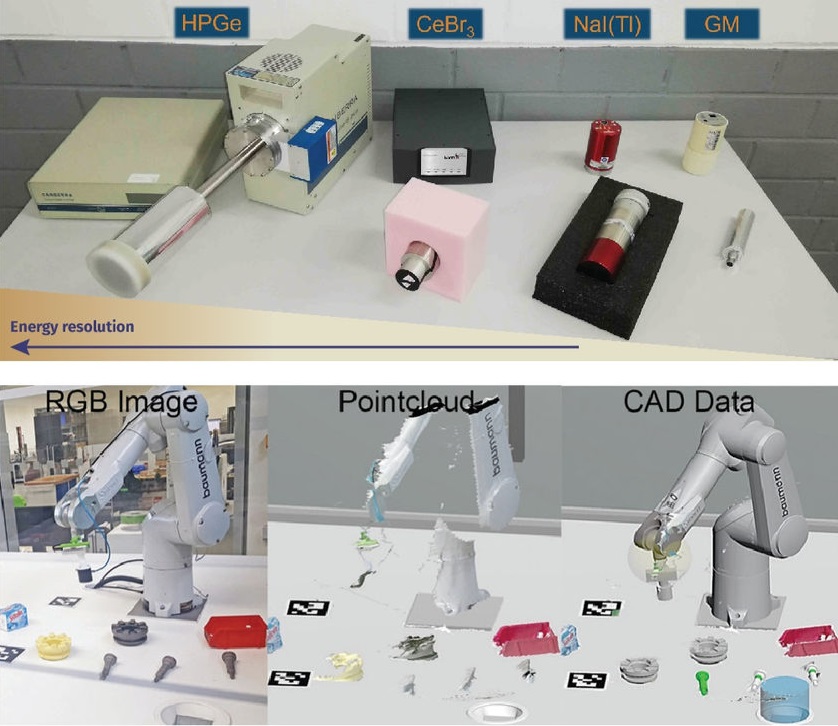 One research question addressed by the Virero project is deriving the sorting criteria. The sorting process is documented and monitored accordingly. In the case of manual teleoperated sorting by the operator, recommendations for action are displayed within the VR. Photo documentation also includes an overlay of the images of waste parts with their reconstructed activity distribution. This allows the radiological characterisation results to be embedded into the conditioning campaign documentation.

Precise activity reconstruction of individual waste parts is likely to allow volume optimisation of packaged radioactive waste. By separating high-activity waste components, hotspots can be separated and fed into a separate conditioning process. This results in lower volumes of highly radioactive waste to be packed and reduced cost.

Remote-controlled robotic arms have several advantages over the mechanical remote manipulators currently used in hot cells. Nearly all existing hot cells are designed for fine motor work with highly active substances. They cannot conduct dismantling and separating procedures that require the use of force, such as breaking up a concrete matrix or cutting metal structures.

The robot arms used in the Virero R&D project can be ordered in different sizes and designs ‘off the shelf’ from various manufacturers. A mixture of heavy-duty robots for processing objects with powerful tools and smaller moving robots for handling individual items are being tested as options.

One difference from the classic manipulator system is that a mechanical coupling between the operator and manipulator arms is no longer necessary. There is no need for a permanent workstation near the hot cell since virtual reality enables spatial decoupling of operator and manipulator. The partial automation tested in the Virero project also increases the efficiency of the sorting process, as it enables longer operating times than with a completely manual sorting system.

Due to the compact and modular design, it can be quickly integrated into the conditioning process. This helps to minimise transport and the associated time delays and risks.