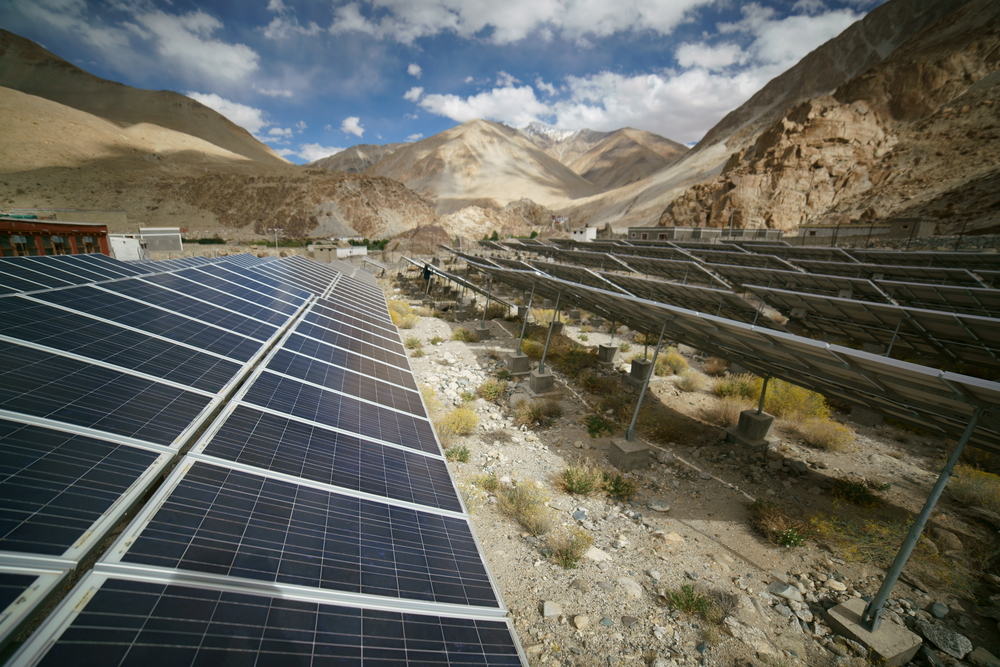 India has ramped up its solar energy capacity in recent years and the nation is now home to some of the largest power plants.

The South Asian nation has placed high hopes on the technology delivering a large portion of its 450-gigawatt (GW) renewable energy target by 2030 as it aims to reduce its fossil-fuel reliance.

India currently stands third in Asia and fourth in the world in terms of solar power production across its plants, with solar accounting for about 38% of its total renewable energy capacity.

The country’s National Solar Mission was launched in 2010 – when just 10 (megawatts) MW of solar power was installed on the grid – with a target of 20GW set for 2020. But due to significant activity within the solar power sector over the following years, India raised its target to achieve 100GW of solar capacity by 2022.

The Bhadla Solar Park, which is the largest solar power plant in the world, is based in Bhadla village, in Rajasthan’s Jodhpur district.

Spanning 14,000 acres, the fully operational power plant has been installed with a capacity of 2,250MW.

The Shakti Sthala solar power project in Tumakuru district, Karnataka, is now the second-largest solar power plant in India, having previously been the largest of its type in the world.

The 2,050-MW plant was developed by the Karnataka Solar Park Development Corporation Limited (KSPDCL), with help from the National Thermal Power Corporation (NTPC). It spans more than 13,000 acres of land.

The 14,800 Indian Rupees crore ($2.1bn) development has reportedly benefited 2,300 farmers, who previously fell victim to the region being located in a semi-arid tract that attracts very little rainfall.

Based in Kurnool district, Andhra Pradesh – another leading Indian state for solar power – the 1,000-MW Ultra Mega Solar Park spans an area of more than 5,932 acres and is the third-largest solar power plant at a single location.

A 1,500-MW solar park is set to become operational in the adjacent district of Kadapa, accompanied by two more large-scale solar power plants, which could raise the state’s solar energy capacity by an additional 2,750MW.

The 750-MW Rewa Solar Power Project is spread over an area of 1,590 acres in the state of Madhya Pradesh and is operated by Rewa Ultra Mega Solar Ltd.

Developed by Mahindra Renewables, Solengeri Power and ACME Solar Holdings, the Rewa solar power plant is one of the major power suppliers to the Delhi Metro – a mass rapid transit system in India’s capital city.

Rewa is the country’s first and only solar project until now to be funded from the Clean Technology Fund and also India’s only solar power plant to obtain a concessional loan from the World Bank’s International Finance Corporation.

The Kamuthi solar power plant in Ramanathapuram district, Tamil Nadu, is the fifth-largest plant of its kind in India.

Kamuthi was set up by 8,500 workers over eight months and is connected to Tamil Nadu Transmission Corporation’s 400KV Kamuthi substation, which distributes power to about 265,000 homes.

The plant is cleaned by every day a robotic system that has its own solar panels to charge it. The state government’s target is to achieve an installed capacity of 3,000MW.