Fossil fuels continue to be a major part of the UK's energy grid, but the nascent technology of wind-powered electrolysis could help make them just a little greener. 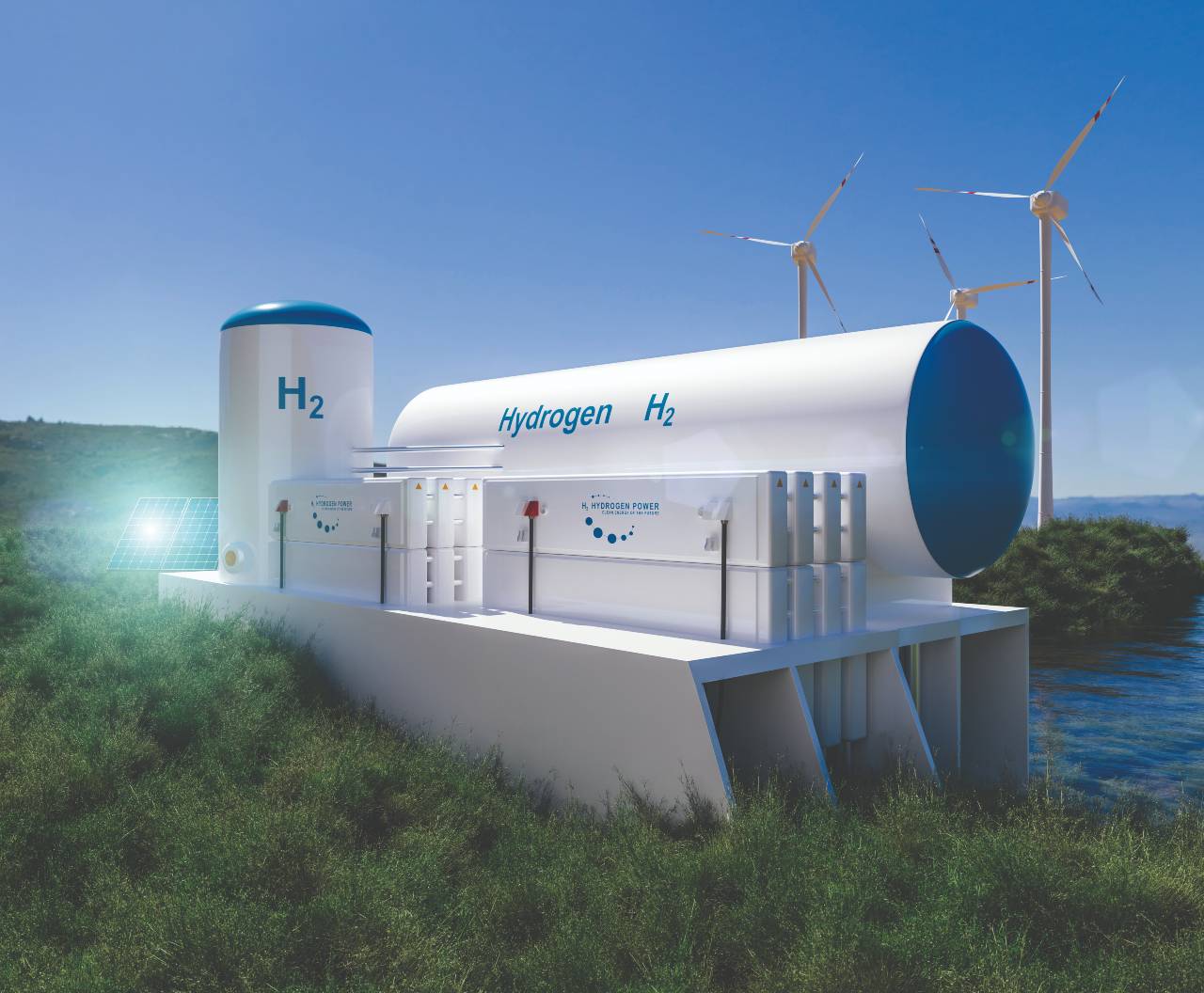 While wind power is going from strength to strength, fossil fuels – most notably, natural gas – remain a vital component of the energy mix for the UK and much of Europe. Fortunately, however, wind is poised to drag the latter into the future by providing the power necessary to create synthetic hydrogen. Greg Noone talks to Angus McIntosh, director of energy futures at SGN, and Kevin Harrison, a senior engineer at NREL, to find out more about the potential of wind-powered electrolysis.

Winters are cold in Levenmouth. Sitting on the Firth of Forth, between Edinburgh and Dundee, temperatures dip to 1°C in the winter, although that degree is nullified from time to time by the bracing westerlies that sweep into town from the North Sea.

Layers are advisable in such weather: jumpers sported by most, woolly hats and thermal underwear for the more adventurous residents. Reliable central heating is also a must-have. From the first stirrings of autumn to the bright light of spring, boilers relentlessly rumble across Levenmouth, warming the radiators and showers that have become a fact of life in this Scottish town for the past 50 years – all burning gas, piped from deep beneath the North Sea.

The product of great masses of ancient plant and animal matter being crushed by tremendous pressures within the Earth’s crust, natural gas, when burned for power generation or heating purposes, produces carbon dioxide; a small but potent, man-made contribution to the warming of our planet’s atmosphere.

For the residents of Levenmouth, that may appear to be much of a muchness: after all, many more obvious climate-wreckers spring to mind than those hankering for a hot shower in a cold Scottish winter. Nevertheless, it is this community that will be the testbed for a sustainable alternative to natural gas – one that will owe its existence to a single wind turbine barely five miles up the coast.

What’s more, this most elemental gas can be sourced directly from water via a process called electrolysis, which uses an electric current to prize apart the two hydrogen atoms inside the liquid’s molecules from its one oxygen atom. The method is, admittedly, energy intensive, but SGN hope that by tapping the power from a nearby wind turbine owned by the UK’s Offshore Renewable Energy Catapult, they can not only obtain enough electricity to keep the electrolyser going indefinitely, but also do it in a purely sustainable manner.

“Our project is turbine tip-to-burner, if you like,” explains Angus McIntosh, director of energy futures at SGN. “There is a vast opportunity to exploit indigenous resources, particularly off the coast of Scotland, where there’s very good load factors and plenty of space for offshore wind to be constructed.”

Part of the UK government’s Gas Goes Green initiative, H100 Fife is intended to demonstrate the feasibility of using green hydrogen to decarbonise the country’s heating systems. The platform for doing so may be small – 300 homes in Levenmouth in the first phase of the project, 1,000 in the second – but if it’s successful it could provide a winning template for greening the entire national gas network, essential if the UK is to meet its net-zero carbon emissions target by 2050.

In truth, though, the residents of Levenmouth will be party to an experiment with much grander implications than simply greening boilers – the production of green hydrogen at scale, according to a model that could manufacture enough fuel to not only decarbonise heating, but energy storage and transportation into the bargain.

Theoretically, hydrogen is the perfect fuel. So named because its main by-product when burned is water (‘hydro’ from the Greek for water and ‘gen’ from gene, or ‘born-of’), science was first alerted to its potential for generating power in 1801, when British scientist Humphry Davy invented the fuel cell, which produced electricity via chemical reactions between oxygen and hydrogen.

Five years later, the French engineer François Isaac de Rivaz built a rudimentary internal combustion engine driven by a mixed hydrogen-oxygen fuel source. For over a century afterwards, however, hydrogen’s practical applications remained largely theoretical, with the exception of its use in airships as a lighter-than-air gas – a fashion that quickly ended with the spectacular explosion of the Hindenburg in 1937.

Only with the Space Race between the US and Soviet Union did the full majesty of hydrogen as a fuel substance become known, the element serving as a major component in the liquid fuel rocket engines of the period.

Barely any of the hydrogen being produced at this point was ‘green’. Over 95% continues to be captured from coal or natural gas to produce so-called ‘grey hydrogen’ – processes that, according to the International Energy Authority, release 830 million tonnes of carbon dioxide into the atmosphere annually. Electrolysis, meanwhile, was hardly practiced at all outside of scientific demonstrations in secondary schools. The reason why, says Kevin Harrison, is that the cost of the electricity needed to produce hydrogen at scale using this method was too high.

“Electricity costs have to be low,” explains the senior engineer at the National Renewable Energy Laboratory (NREL), headquartered in Golden, Colorado. One recent study in the journal Energy found that it was up to six times less cost-efficient to produce green hydrogen using solar than through traditional methods. Patently, any future hydrogen economy has to be cheap and cheerful. “That is your number one goal if you want to produce green hydrogen competitively,” says Harrison.

Even if we’re not quite at that stage yet, the stars seem to be aligning for an affordable green hydrogen production base. For one thing, the cost of manufacturing turbines has fallen considerably in recent years, fuelling demand for new wind farms across Europe and North America. Thanks to ongoing research efforts by institutions including NREL, the efficiency of electrolysers is constantly being boosted, while the cost of running them is predicted to fall in the next decade – by up to 75%, according to predictions by the US Department of Energy.

That, in turn, has coincided with burgeoning public demand for renewable energy and the progressive decarbonisation of the world economy. “I’m working with a handful of natural gas utilities that want to decarbonise the natural gas grid,” says Harrison – a desire that isn’t just derived from a sense of civic duty to the environment. “They’re also getting pressure from investors, of course, that see the writing on the wall.”

Many companies have begun to act. In August 2020, Siemens Energy and China Power International announced a partnership to build a green hydrogen facility outside Beijing, powered by wind turbines in Inner Mongolia. In Australia, meanwhile, the Asian Renewable Energy Hub proposes to invest A$50bn to build 26GW of wind and solar capacity to power a green hydrogen export plant in Pilbara, Western Australia. The issue even cropped up during the US presidential election, with President Joe Biden including a commitment to starting a green hydrogen research programme in his Democrat Party platform.

Most green hydrogen facilities remain on the drawing board or are too small to make a meaningful contribution toward global output of the gas (only 5% of it is manufactured via electrolysis, mostly as a by-product of chlorine production). Admittedly, H100 Fife will fall into the latter category when production is up and running in winter 2022.

Nevertheless, its template is one that could be replicated with ease by energy companies up and down the UK coastline. According to a study by the London-based Centre for Policy Studies in June 2020, the country is ‘blessed’ with the ideal conditions for manufacturing green hydrogen at scale.

“Few other countries can rely on sites like the North Sea, which is not only very windy but is also relatively shallow,” the report continued. “This makes it easy to install the turbines that will eventually generate the electricity needed to electrolyse water into useful hydrogen.”

That means nothing, of course, if customers aren’t receptive to green hydrogen. As such, all household participation in H100 Fife will be voluntary. “You want to make sure it’s an opt-in opportunity, and that those that do opt in [are] not disadvantaged in any way,” explains McIntosh. Much of that effort is concentrated on convincing customers that green hydrogen is functionally identical to natural gas, something SGN intends to demonstrate by building a demonstration home in Levenmouth, complete with a working hydrogen-powered boiler and requisite shower, heater and oven.

Those households that participate in H100 Fife will give SGN a crucial insight into how a green hydrogen network could potentially work. “There will be about 115-plus outcomes of the project,” says McIntosh, from how the ancillary supply equipment works to the reliability of the new network’s gas detection equipment. “It will give critical insight into hydrogen as an option for [the] decarbonisation of heat, both in terms of the success of the project and the customer appetite and customer acceptance of it, whether or not it meets their wants and needs.”

The potential usefulness of green hydrogen doesn’t stop at greening energy networks. Should the price of wind and solar energy continue to fall and the efficiency of electrolysers improve over the next decade, there is reason to believe that the gas could play a crucial role in decarbonising other parts of the energy mix. According to Harrison, the increasing use of hydrogen fuel cells in material handling vehicles indicates a broader role for the gas in transportation. “Companies like Plug Power and others have found an economic, competitive market by powering forklifts with hydrogen fuel cells versus their all-battery […] propane solutions.”

After that, the next market for green hydrogen could well be light-duty vehicles. “You see UPS trucks and garbage trucks moving around with natural gas now, or compressed CNG,” says Harrison. “That could be hydrogen.”

What remains to emerge is any clarity on what all this might cost. According to the International Renewable Energy Agency, fully meeting demand for hydrogen in energy storage, transport and heating would require up to 158.3 million tonnes of the gas being produced a year, something that energy news site Recharge calculated would require 1,775GW worth of wind farms powering production. While the world currently produces roughly 120 million tonnes of mostly grey hydrogen per year, total wind energy capacity only stands at 564GW.

Even so, it is hard to imagine green hydrogen being excluded from any global transition towards renewable energy. This derives, in part, from its advantages as a storage medium. Hydrogen fuel cells are perfect for storing electricity for a rainy day, essential if the grid is reliant on fluctuating power sources like solar or wind energy. What’s more, capacity can be increased relatively cheaply by buying more storage tanks, as opposed to batteries, which need to be manufactured.

It seems more realistic, then, to think of green hydrogen not as a panacea for the climate emergency, but just one of many weapons to use in our fight to reduce carbon emissions. It’s a fight Harrison is well-acquainted with, having spent much of his youth fighting in the US court system to get a wind turbine erected in his backyard against vehement local opposition. Today, he’s busy training the next generation of renewable energy engineers at NREL.

“We don’t have a lot of time, in my opinion, to wait 50 years for the silver bullet that will solve all our problems,” says Harrison. “There is a sense of urgency to train these younger folks as engineers and scientists, so that they’re deploying this stuff we have in the lab tomorrow.”