We focus on the green credentials of the French wind energy industry to understand what the future could bring. 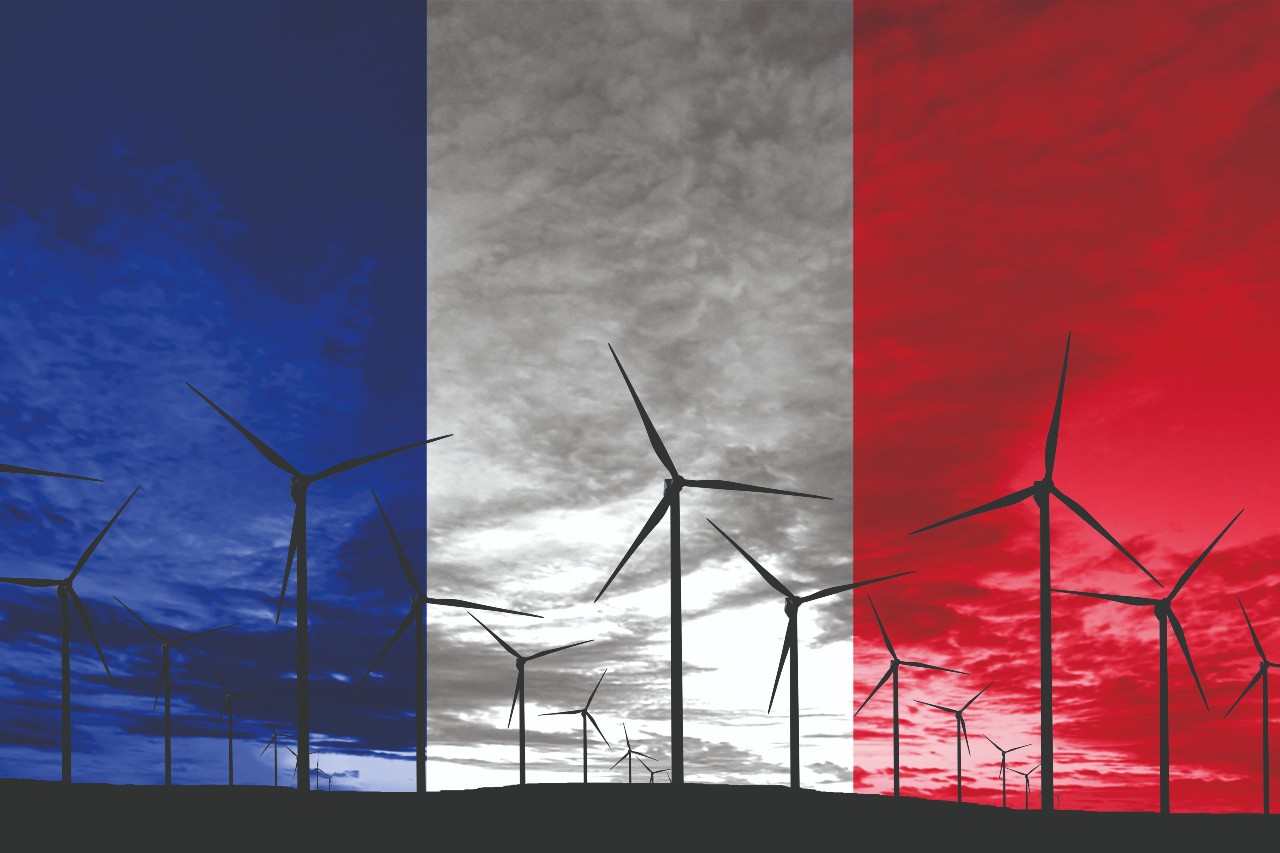 France has one of the largest wind potentials on the continent, but it has long struggled to meet national objectives. (Credit: Allexxandar/Shutterstock.com)

With robust wind energy goals and ample government investment, France is typical of European countries eager to show off their green credentials. In practice, however, the Hexagon has struggled to match the successes of its neighbours. Between acres of red tape and broad suspicion of wind farms in general, that isn’t very surprising – however, the future of French wind energy does seem rather brighter. Andrea Valentino talks to Pierre Tardieu, chief policy officer at Wind Europe, and Matthieu Monnier, deputy CEO at France Énergie Éolienne, to understand what tomorrow could bring.

If you’d looked out over Saint-Brieuc Bay on 7 May, you’d have seen an apparently familiar view: dozens of fishing boats, green and blue and rusted red, all bobbing in the English Channel. In itself, none of this would have felt new. This part of coastal Brittany, heaving with scallop and abalone, has hosted fishing boats for centuries.

Yet if you stood and stared for longer, you’d have noticed something odd. None of the 70 fishing boats that sunny Friday morning were actually casting their nets. Instead, they were acting as a kind of floating picket, blocking a far larger vessel from going about its business.

Known as the Aeolus, the fishermen’s target was a 457ft monster built for a single purpose: erecting offshore wind turbines. Yet as the fishermen have complained in increasingly violent terms, the Aeolus and its turbines would quickly ruin their catch – and their livelihoods.

As one of their representatives proclaimed in 2020, the trawlermen would rather die than let the project succeed. It hasn’t come to that so far.

Yet, while Iberdrola’s Saint-Brieuc project limps on, with the eventual aim of delivering clean energy to 835,000 people, the controversy persists. In the nearby city of Rennes, opponents of the scheme recently lodged two complaints with the local administrative court, hoping to stop the project for good.

Nor is this beautiful corner of Northern France, its verdant cliffs sinking down to a cobalt sea, particularly unique. Despite ambitious government plans, and one of the most auspicious natural landscapes on the continent, France’s wind energy sector has long struggled. That’s true everywhere: every region has its opponents, and onshore schemes are typically viewed with as much suspicion as their offshore cousins.

With education on the rise, however – shadowed by attempts to smooth the planning process – well under way, people probably shouldn’t discount the country’s wind sector just yet.

It might occupy the very heart of western Europe, but France is a surprisingly empty place. Paris is a fevered metropolis, of course, but Bordeaux, Lyon and Strasbourg all squat at the Hexagon’s outer edge.

Between them are vast tracts of countryside, the meadows and vineyards that make up la France profonde. With a population density half that of Germany, this ‘deep France’ is remarkably desolate, especially when you add the lonely uplands of the Jura or the Auvergne.

Together with a number of powerful prevailing winds, Pierre Tardieu describes France as “perfectly well suited from a resource and geographical standpoint” for the proliferation of wind energy. By one estimate, indeed, the country has the second-largest wind potential on the whole continent.

And, as the chief policy officer at Wind Europe continues, all this is particularly true given France’s unusual shape. Places in the centre of the country may be securely connected to the nuclear-backed electricity supply, but outcrops like Brittany could really do with what Tardieu calls the “extra generation” offered by turbines.

Given it has both the demand and the supply, in short, it makes sense that the Élysée has pushed so hard to develop the sector. President Macron wants one-third of French energy to come from clean sources by 2030, according to Wind Europe, and the government recently approved €30.5bn in subsidies for renewables.

All this activity is bearing some fruit. Despite lockdowns and social distancing, France added 1GW to its wind power capacity in 2020, building on steady growth over the past decade. Even so, you get the sense that the country hasn’t really hit its stride.

“France is a bit below national objectives in terms of wind energy development,” says Matthieu Monnier, deputy CEO at France Énergie Éolienne (FEE), the republic’s main promoter of wind energy. A fair point: according to a Statista report, though installed capacity topped 1GW back in 2006, it took another nine years to reach 10GW.

By the end of 2020, France’s on and offshore wind farms were still only creating 17.6GW of power. To put that into perspective, neighbouring Spain boasted peaks of 14.9GW as long ago as November 2010, according to Red Eléctrica.

To a certain extent, this gradualist approach can be understood in terms of France’s awesome nuclear capacity. Encompassing 56 reactors, altogether they pump out 45.2GW of power, or 72% of the country’s total energy usage, according to the World Nuclear Association.

Meanwhile, France has long sold excess nuclear power abroad, swelling the national coffers by around €3bn each year. Yet as the furore at Saint-Brieuc implies, France’s aversion to wind extends to more than a love of atom splitting.

From anarchists suspicious of corporate deals to wealthy landowners unwilling to see their views defiled, Tardieu says that many commentators now see wind farms as “incompatible with France’s cultural heritage”.

To make matters worse, both Tardieu and Monnier agree the issue has become something of a political football. Though the Macron government broadly supports turbines, his right-wing opponents are adamantly opposed.

If she wins the 2022 presidential election, Marine Le Pen has promised to “deconstruct wind farms” across land and sea. In the face of these pressures, Macron himself has had to backtrack, reiterating that nuclear power would always be “the cornerstone” of his country’s energy sector.

When they become operational late 2022, 30 new additions to the Sud Marne wind park will prod France ever so slightly closer to a green tomorrow. In a partnership between TTR Energy and Vestas, the order, soon to luxuriate amid the endless wheat fields west of Paris, will create 122MW of clean, renewable energy.

And though those 30 turbines will only represent a fraction of France’s total wind energy capacity, they’ll still make a welcome addition to Vestas’ footprint in the country. With 2,300 turbines, representing 5.8GW of capacity, the Danish manufacturer clearly prefers innumerable small projects to a few scattered giants.

As Monnier explains, this is typical of France’s wind sector in general. “It’s not like Scandinavia, where you’re building massive gigawatt-scale wind farms,” he stresses. “The French market is much more fragmented, much smaller and very well integrated in the community.” Though statistics are scarce, this is basically supported by the numbers.

Between 2002 and 2008, for example, the average size of French wind farms rose from 4.7MW to 13MW, according to a report by Reve. That may sound like a lot – until you compare it with other European countries. Even in 2010, from a report by State of Green, offshore farms in Denmark were averaging sizes of 300MW.

In part, the fractured nature of French wind explains its troubles: getting even a small project off the ground means dodging a thunderstorm of local interests, resulting in the average French wind farm taking over six years to get approved.

For Monnier, however, this narrowness also offers opportunities. “It’s important to show the concrete benefits of the wind turbines for the territory, in terms of taxes, jobs, employment,” he says. “It’s about human relations and education.”

To this end, Monnier and his colleagues at FEE have started publishing forests of information on the advantages of wind, encompassing everything from interviews with mayors to detailed regional statistics on turbines and economic growth.

There are some signs, moreover, that this publicity drive is working. Despite persistent local grumbles, 76% of people in France now have a positive view of turbines, a figure that rises to 91% among under-35s – according to FEE. On a policy level, meanwhile, both Monnier and Tardieu support a simplification of the planning laws.

In particular, Tardieu would love to see approval times cut from that six-year average, if only from a technological perspective. The problem, he explains, is that by the time a project is finally authorised, the machinery involved is sometimes defunct. That means new turbines are both less efficient and more expensive than they otherwise could be.

Fortunately, Tardieu emphasises that the government is taking these hiccups seriously, digitising the application system and streamlining the regime around legal challenges. Among other things, that could get stealthier turbines online faster, potentially reassuring French generals concerned about blocked radars.

The future of France’s wind sector in the balance

Though they’re only happening in April 2022, France’s presidential elections are already heating up. President Macron and his rivals to the left and right have started sniping across a number of controversies, from immigration quotas to France’s role in Nato. With years of bickering already behind them, the country’s leaders have also made wind farms a major electoral dispute.

Beyond Le Pen’s pledge to crush the industry, several other right-wingers, from Occitanie to the Belgian frontier, have also rallied to the anti-wind standard. At the same time, French senators recently gave mayors the right to veto wind farms in their area.

In other words, the results of next year’s ballot could shape France’s wind sector for a generation. So which direction do the experts think the political breeze is blowing?

Though he refuses to make any specific predictions – “I famously get it wrong all the time” – Tardieu is “cautiously optimistic” about tomorrow. Though a Le Pen victory would clearly dampen the spirits of wind enthusiasts across France, he believes that the stark consequences of climate change will inevitably carry wind into the public square.

As Tardieu puts it, “The push for climate action is only becoming more evident and more urgent.” And as those approval numbers suggest, this is a sector that stridently belongs to the young. Older people may be sceptical about their benefits, but Tardieu underscores that kids like his son see wind turbines as a “natural part” of their country’s landscape.

Whoever occupies the Élysée next summer, then, the forecast for France’s wind sector seems sunny. If nothing else, this can be seen in the system of auctions that underpin many of the country’s turbine schemes. Though the process can sometimes be cumbersome, forcing companies to battle over rights encourages low prices.

At one recent auction, near Dunkirk, the price cleared just €44/MWh, a figure Tardieu describes as “extremely” competitive. To put that into perspective, he adds, power at the UK’s planned nuclear station at Hinkley Point is predicted to come in at £92.50/MWh (about €107). With figures like that, even impetuous Breton fishermen may find it hard to complain.