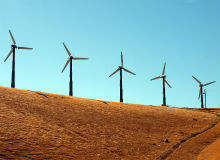 Commercial wind turbine manufacturing started in the 1980s, with Danish technology leading the way. Since then, wind turbine technology has witnessed enormous improvement in terms of efficiency and visual design; the turbines have grown larger and taller. Some modern wind turbines are 100 times larger than those of the 1980s, with an eightfold increase in their rotor length. Additionally, modern technology is capable of effectively generating electricity at sites with low or high wind speeds. The surge in large wind turbine production is primarily driven by the emerging offshore market.

Design innovations include blade manufacturing using different combinations of composite materials, primarily to minimise the turbine weight; development of the drive train system to reduce loads and increase reliability; and enhanced control systems to enable better compatibility with the grid network. Continuous improvements are being made to increase the efficiency of wind turbines to capture maximum energy from wind and convert this energy into electricity. Modern turbines, because of this constant design development, are quick to install, more efficient, reliable and modular in shape. Ease of installation reduces the site construction process for modern turbines. Other design drivers include aerodynamic performance, productivity in low wind speeds and offshore expansion.

Prepreg is a process where fabric is mixed with a resin, forming a homogenous precursor, which is used for manufacturing composite components. The resin used in manufacturing prepreg has high viscosity and allows easy handling, cutting and lay-up into the mould at room temperature. Prepreg is used in roof format and has the benefit of better control and performance than that of infusion or wet system. The equivalent resin and reinforcement resin are less expensive than the prepreg process. Furthermore, the tooling cost also increases as temperatures increase during processing.

The prepreg process can be summarised as follows:

Prepreg is mainly dependent on the fabric and the process of converting prepreg to the mould surface is called drape. Drape is required during the lay-up as prepreg plies form bridges, trapping a large volume of air in the laminate. Prepreg is stored at low temperatures to prolong its life. To keep whole rolls at room temperature, these have to be conditioned or tempered. Protective packaging is necessary as, otherwise, material can get contaminated because of condensation. The prepreg is transferred to the mould and the ply is moved to make small adjustments and replacements. The second backer is removed from the first ply when the second ply is ready for application. For sandwich structures, core kits are used on the first layers of prepreg before it creates the second skin over the core.

SPRINT (Gurit’s resin-infusion technology) is a process developed especially for large structures. With the increase in component size, the thickness of the laminate also begins to increase. This approach is prohibitively expensive and time-consuming for the high-volume component. Fibres and resin are added in SPRINT technology as in conventional prepreg. SPRINT shares the advantages of both infusion and prepreg technology. The infusion process is capable of producing very thick and high-quality laminates in a single operation. SPRINT is applied to the mould and air is passed between the ply and vacuum. SPRINT uses advanced prepreg resin technology in order to infuse the laminate structures. Vacuum connected to the laminate is used in the infusion technology. The temperature is increased to enable the proper flow of resin and infusion of the resin fibres. SPRINT products are stored at low temperatures for their preservation.

The hand lay-up process is an open mould process in which there is the application of resin along with components or reinforcing material. Curing takes place at ambient temperatures but can be accelerated by heating. The hand lay-up process is a standardised method which has been used widely for many years. It is a low-cost tool, if room-temperature-cured resins are used. This process requires a high amount of long fibre and resins in the form of bonded, woven and stitched fibres, which are impregnated with resin by hand. Rollers or brushes are used for the above process. Laminates are cured under standard atmospheric conditions. The hand lay-up process is labour-intensive and plastic resin also produces toxic fumes. Workers are provided with ventilation facilities and protective equipment.

In the VARTM (vacuum-assisted resin transfer moulding) process, fabrics are laid first as a dry stack of material and then into the mould tool. After that, another mould tool is clamped over the first, and resin is injected in the mould. Vacuum is applied to support the resin drawn into fabrics. The resin inlets are closed and the lamination process begins once the fabric is wet out.

"Some modern wind turbines are 100 times larger than those of the 1980s, with an eightfold increase in their rotor length."

The resin transfer moulding (RTM) process is largely used in the manufacturing of blades for small aircraft and automotive components. In the VARTM process, fabrics are laid up in a similar way to RTM and the fibre stack is covered by non-structural fabric and peel ply. Then the whole dry stack is vacuum-bagged and, after any leaks are removed, the resin is allowed to flow into the laminate.

In SCRIMP (the Seemann Composites Resin Infusion Molding Process), fibre reinforcements, core materials and other inputs are laid up in a tool to dry. Then a vacuum bag is placed over the lay-up and sealed for vacuum. The resin is then allowed to flow into the laminate. The glass-to-resin ratio is higher because, compared with the others, this process uses higher fibre content by weight and volume. Through the application of the various core materials, the structural characteristics of the component part may be engineered as per requirements. The blades manufactured through this process are particularly useful in manufacturing strong blades that can resist harsh environmental conditions.