The principles behind a unique innovation that started out life as a way of transporting delicate tree fruit has been transferred to fish and aims to revolutionise fish passage at US dams. 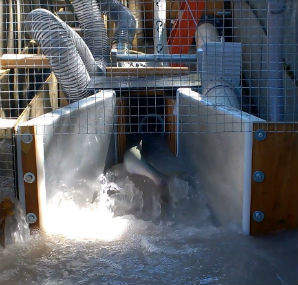 As fish passage advocates increasingly turn up the volume on the need for better ways to help migratory species return to their traditional spawning grounds, and as clean energy proponents begin to embrace hydropower as long as it addresses fish passage, many in the hydropower industry and policy community have started to pay close attention to a promising new fish passage technology that some consider the Holy Grail of fish passage: The Whooshh fish transport system.

This proprietary, water-sparing system depends on gentle pressure differentials and a light mist of water to move fish through a soft, flexible, durable tube to its destination. To date, the company has deployed systems with tubes ranging in length from 10 to 330 meters, says Whooshh Innovations co-founder and CEO, Vince Bryan III.

Already field-tested and, the company claims, shown to be more energy-efficient, fish-friendly, and cheaper than fish ladders or trap and haul systems, the Whooshh system today has emerged on the scene as one of one of the only modular fish passage solutions available that does not require large amounts of water, labour, or capital to address fish passage requirements, asserts Bryan.

After years of research and development, today the Whooshh solution has convinced skeptics and captured the imagination of those who want to see migratory fish make it up and over barriers such as dams and back to traditional spawning grounds that, in some cases, have not seen native spawning fish for decades, Bryan observes. For the Tribes, as well as for proponents of clean energy and fish, adding an entirely new set of tools to decades-old tools fish passage challenges makes complete sense.S o what is Whooshh and why is it a solution worth considering?

Like other disruptive technologies before it – think of the telephone, automobile, and even the personal computer – the Whooshh “tube” was regarded as something of a novelty when it was unveiled in 2014, even after news of its being purchased by the Washington State Department of Fish & Wildlife (WDFW) to sort and transport hatchery-bound fish on the Washougal River went viral.  Embraced equally by conservative and liberal media as a solution to help fish get past obstacles, the Whooshh system was then and is now also viewed as a novel, affordable, fish-friendly solution whose time had not only come but was long overdue.

For an industry that needs a viable fish passage solution, Whooshh today holds great promise in paving the way for the licensing and relicensing of dams, while at the same time reminding the public and politicians that dams and hydropower are part of a much broader solution—that clean hydro is a way to reduce carbon emissions, slow down global warming, and aid the recovery of fish in our waterways.

According to Bryan: “Whooshh has come a very long way in garnering the support of the hydropower industry as well as the agencies charged with assuring safe, timely, efficient and effective fish passage.”

Having recently met in Washington, DC, with key agencies ranging from the Federal Energy Regulatory Commission, U.S. Bureau of Reclamation, the National Marine Fisheries Service, and U.S. Fish & Wildlife Service, in conjunction with participating in the National Hydropower Association conference, Bryan observes that fish passage stakeholders see the Whooshh solution as the “best hope of providing fish passage to waterways that do not meet modern day fish passage performance standards.”

He notes further that hydro, providing the base power, has aligned with solar and wind power as complementary sources of clean energy. “When you add the Whooshh fish passage system,” Bryan said, “the hydropower industry and conservation groups can make a shift in thinking and strategy by being proactive in deploying fish passage, rather than being purely reactive to prescriptive or mitigation measures that often don’t adequately address fish passage—which historically has been a black mark for the industry. By making a fish passage solution that is more accessible for both the fish and the budget, Whooshh helps the conservation community embrace hydro as a green solution,” he adds.

But how “green” is the Whooshh solution? In a 2014 blog by Hoyt Battey of the U.S. Department of Energy (DOE) Wind and Water Power Technologies Office, the DOE views Whooshh as one of the new technologies the agency is reviewing as part of its goal of “making hydropower more eco-friendly.” He writes, “Advanced fish passage systems, such as the Whooshh technology, represent promising advancements for reducing the environmental impacts and mitigation costs for hydropower technologies.”

Vince Bryan asserts that, while there is no “average” cost of a fish ladder, the Whooshh solution in every instance would be 20% or less of the cost of the fish ladder—and can often be deployed where fish ladders are not a viable option. More importantly, the Whooshh solution can be installed in weeks as opposed to years, Bryan asserts, so “fish passage can often be addressed before the rest of the project or project licensing even begins.”  Bryan and others would like to see all hydro projects made “Whooshh-ready” even in instances where a ladder or other passage device is slated to be installed.  “Our system can be installed right where the fish naturally swim or hold in the river, reducing many of the attraction flow issues,” Bryan notes, “and making it much more likely that fish passage will be timely and successful.”

Which brings us to another major benefit of the Whooshh system: A swim-in entry.

While the initial Whooshh systems were designed for biologists and fisheries managers who needed to handle their fish—as was the case at the WDFW Washougal site—the Whooshh system now takes into consideration fish behaviour, letting the fish decide when to move past the barrier. All of this, of course, takes place without any human handling or intervention.

This takes advantage of the natural instinct of the fish to swim upstream and into the flow of the river. How it works for the Whooshh system is that the fish, after orienting into the flow, ultimately swims to the Whooshh Accelerator where it is dewatered and then drawn into the Accelerator. A loose seal is then created around the fish and a small and localised pressure differential (<2.0 PSI) is introduced between the front and the back of the fish.  This creates a net motive force that naturally propels the fish safely and gently through the tube.

Because the fish enters the tube head-first, it is able to “glide” up through the tube, propelling it along at an average rate of 8m/sec. The other benefit of this head-first approach is that the fish gently “slides” out head-first when exiting, dramatically reducing potential injury caused by shear forces on the fish that can occur if or when it exits tail-first.

Because the Whooshh system uses very little water (an average of only 34 liters/hour) to lubricate the interior of the tube, operators benefit. The system can save water managers as much as 10 percent of their water for other uses, asserts Bryan. Unlike fish ladders, the water used to attract the fish does not need to spill from the forebay when using the Whooshh system; instead, it relies on the water in the tailrace. As a result, the water used as attraction flow is the same temperature as (and, importantly, not warmer than) the water below the dam, a key to successfully passing many fish species with minimum stress.

Originally invented as a way to safely and gently transport delicate objects such as tree fruit, the Whooshh tube seemed to be a “natural” when it came to moving irregularly shaped perishable objects such as fish.  As the story goes, the company’s founders were sitting on a deck overlooking the Columbia River, watching helicopters scoop fish and move them past the dam—which seemed both expensive as well as stressful for the fish. “We knew then that we needed to look at expanding the use of our technology on fish as well as fruit,” said Bryan.

And for the next six years, that’s exactly what happened. Whooshh Innovations’ leadership team began meeting with every federal, state, and local agency that had anything to do with fish, including fish biologists, Tribal entities, elected and appointed officials, and testing laboratories. To date, the company has subjected its technology to rigorous studies with respected laboratories such as the U.S. Department of Energy’s Pacific Northwest National Laboratory (PNNL), the U.S. Geological Survey’s Columbia River Research Laboratory, Alden Research Labs, The Conservation Fund’s Freshwater Institute, and others. One of the most comprehensive studies, conducted in 2014 by PNNL, looked at the efficacy of the Whooshh system with adult fall Chinook salmon versus traditional “trap and haul.” The study results demonstrated, among other findings:

(More study information can be found on the Whooshh website or by clicking on the following link:  http://www.whooshh.com/studies.html.)

So what’s the catch? “Change can’t happen without the industry taking the lead, and demanding that the agencies do more for the fish today, not tomorrow, and collecting passage data so that the industry can demonstrate success,” Bryan says. “The status quo has not and will not solve the problem.”

He notes that, while federal and state agencies cannot endorse a company’s product, and are only set up to respond, they will pay attention to a well-informed industry group that seeks to make something happen for society’s benefit (and the fish).

Given that the “state-of-the-art” in fish passage—fish ladders, trap and haul operations, fish lifts, and others—is more than 80 years old, Whooshh stands to make a huge and positive impact on the hydropower industry.

Because the requirement for fish passage is higher today than when many of these projects were first licensed: “Both the Tribes and the conservation community are taking up the cause of fish passage as never before,” Bryan says.  “Our work with the Tribes has made it abundantly clear that they are looking forward to the day when fish can return to their ancestral spawning grounds in naturally sustainable numbers.”

Recently, Nez Perce tribal fisheries biologists visited possible Whooshh sites in both Oregon and Idaho where Whooshh systems make sense today. These include the Little Salmon River, the South Fork of the Clearwater River, the Dworshak Dam in Orofino (the highest straight-faced dam in the United States), and on Wallowa Lake, OR, where the nearly century- old dam has no fish passage.

Regulatory hurdles aside, Bryan and others see that the tide has changed in favor of new technologies such as Whooshh for fish passage. A Whooshh system can be installed as a low impact seasonal measure—just when fish are scheduled to run in a particular location—or the system can be installed as a permanent feature without disturbing the shoreline. As Bryan concludes: “Imagine solving the problem of fish passage instead of mitigation measures that are never enough.”

The author is Jeanne McKnight, a communications strategist and writer with more than 25 years working in fisheries and natural resources arena.  www.whooshh.com