Welcome to the Batcave

A lithium-ion battery and hydropower are working together in the Nordics in an effort to prevent the premature wear and tear of turbines. 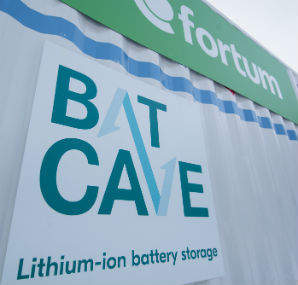 The biggest lithium-ion battery in Northern Europe, carrying the project name of Batcave, was inaugurated on 1 March 2017 in Järvenpää Finland. With a 2MW power and 1MWh energy storage capacity, the battery was not only designed to to increase storage technologies in the energy system due to the rapid increase of wind and solar power; the battery was also to play a role benefitting hydro power plants in Finland.

Fortum owns and operates about 260 hydro power plants in Sweden and Finland and, as the company’s first utility scale battery project, the Batcave will complement the operation of hydro power in the Nordic system.

In order to secure electricity supplies, supply and demand needs to be balanced in the power grid. Transmission system operators (TSO) are typically responsible for securing the electricity supply to all electricity users by using ancillary services. In practice this can be done by power plants decreasing or increasing their production or some relay based loads reacting to the frequency of the electrical grid.

In the Northern Europe a lot of this balancing is done with hydro power plants. Hydro power Kaplan-turbines have a quick response to desired changes and can increase and decrease the production within under a minute. In Norway, Sweden, Denmark and Sweden hydro power counts for half of the whole electricity demand. Thus in the Northern Europe hydro power offers a relatively good flexibility and energy storage capacity to answer the power grid’s needs for emerging wind and solar into the electricity system.

But the rapid changes in the hydro power production does not come without a cost; wear and tear of turbine blade bearings, seals and regulating servos of Kaplan turbines due to the rapid production changes have been observed. This unexpected wear and tear has led to execution of large turbine refurbishment projects earlier than the initial life-time expectations would have predicted. The cause of  premature wear and tear has been identified to occur due to the rapid adjustment of turbine blades to the frequency drop or increase in the electricity grid.

The low cost of lithium-ion batteries raised a question: could batteries provide some extra benefit if operated together with hydro power?

Technology and use of Batcave-battery

With a few seconds response time, lithium-ion batteries can provide balancing services to the power grid. Fortum’s Batcave-project was initiated in summer of 2015 with the idea to explore and understand the new emerging storage technology and to reduce the use of Fortum’s hydro power for the power grid frequency regulation. The name of the project “Batcave” is combined from two parts: word “Bat” is an abbreviation for “battery” and the second part “cave” represents the physical housing of the battery which is a 6m long shipping container. Similarly, as the Batman’s Batcave, Fortum’s Batcave is a high technology platform for new research and development.

After the tendering process the turn-key contract for the lithium-ion battery and it’s required power electronics were signed with a French company Saft SA in April 2016. Saft was later during the project acquired by a sun power, oil and gas company Total SA. Fort the required power electronics, including three inverters and a transformer, Saft had Schneider-Electric as their supplier.

The battery and the required power electronics are built into two shipping containers, which were delivered to the Järvenpää site in Finland with everything already assembled within. The 20 feet shipping container has the lithium-ion battery within itself: It consists of 17 battery units, which each have 28 battery modules containing 14 battery cells within them. All together the battery system has 6664 cells (looking like a long aluminum tin can). The overall voltage of the battery system is 719 V. Each battery unit has their own safety system called Battery Management System (BMS), which for example monitors the temperature, current and voltage level of each cell. If the BMS detects an abnormality in the values it will disconnect the battery module for safety reasons.

Although the idea of the Batcave-battery was to operate it together with hydropower, that did not mean that the physical location would need to be close to Fortum’s existing hydro plants. Batcave-battery is connected to the power grid via Fortum’s biomass burning combined heat and power plant (CHP) in Järvenpää commissioned in 2013.

The power conversion system by Schneider-Electric connects the battery to the plant’s power grid. It contains three inverters with the nominal maximum active power of 680 kW each and a transformer (0,4/10,5 kV). In addition, for the battery’s ability to provide active power via the inverters, it can also provide voltage support with reactive power. The power conversion system communicates with the battery system and the overall commands are given by so called Fortum Controller: controller logic designed by Fortum.

Batcave-battery has been accepted to provide these services to the TSO: it can start charging or discharging active power to the grid within a second. By letting Batcave perform the rapid balancing of the grid, the use of the hydro power in these rapid balancing acts can be reduced. This way the premature wear and tear of the Kaplan turbine blade regulating servo, blade bearings and seals can be reduced and thus premature large investment projects can be prevented.

Profitability and the future

The price of lithium-ion batteries have declined immensely over the last 10 to 20 years. If this trend continues we might see more batteries working together with hydropower. Batcave being also one of the first R&D projects of lithium-ion batteries in Finland has received 30% investment funding from the Finnish government. Time will tell if the Kaplan turbines have been saved from premature refurbishment projects.

Fortum will continue its actions towards a cleaner future with renewable energy production. With the increasing use of wind and solar in the power system, the future might require more flexible storage systems. Lithium-ion batteries might play even a bigger a role in the future also alongside hydropower and with Batcave, Fortum has taken its first step.