It has recently been shown that the behavior of ultrasonic waves in metals changes significantly in response to microstructural components formed during neutron irradiation, especially when the microstructure contains a high density of vacancy voids. We have developed a predictive model of ultrasonic wave behaviour caused by such changes in neutron-irradiated 304 stainless steel. Calculations performed for unirradiated archive and irradiated metal yielded results reasonably consistent with experimental data. By Yoshihiro Isobe, Junji Etoh, Mitsuyuki Sagisaka, Takashi Matsunaga, Paula Freyer, Frank Garner and Taira Okita 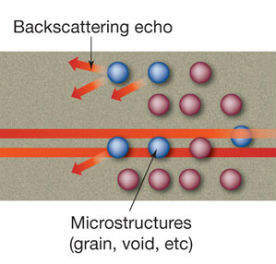 Accurate methods of detecting in-service degradation of structural materials are important for successful operation of nuclear reactors. There can be significant changes in microstructure, physical and mechanical properties and the dimensions of a structural component, depending on the operating conditions in the reactor [1].

Ultrasonic waves, which are commonly used in non-destructive testing to detect macroscopic cracks, are thought to change as a result of interacting with microstructural ensembles in structural materials. In recent studies, the macroscopic and microscopic alterations of thick (1-5 cm) irradiated blocks of 304 stainless steel were studied using a variety of nondestructive techniques, which revealed significant radiation-induced changes in the physical properties and dimensions of the blocks [2, 3]. Changes in the physical properties, including density and ultrasonic velocity, appear to be well-correlated with the observed dimensional changes and microstructures. By investigating the change in magnitude and frequency of reflected ultrasonic waves, one can determine both the average change across a thick component and the depth distribution of irradiation-induced microstructures composed of voids, precipitates, and dislocations.

Dislocations are linear defects in crystalline structure that strongly influence all mechanical properties, providing a means to produce deformation at lower energy than required for planar shear. Dislocations can be produced by mechanical processes and also by displacing irradiation by energetic neutron or charged particles. Voids are three-dimensional aggregates of vacancies that are usually crystallographically-faceted, and are vacuum-filled. Voids form during irradiation as a consequence of slightly different acceptance rates at dislocations of vacancies and interstitial atoms, both formed in pairs by displacing irradiation.

Generally speaking, when austenitic stainless steels such as type 304 and type 316 are irradiated by neutrons, dislocation density will be saturated at irradiation fluence around a few displacements per atom (dpa). At this stage, generally speaking there are no significant voids in the materials. However, above that level, swelling due to voids will increase as long as neutron fluence increases. Therefore, at the very early stage of neutron irradiations, the effect of dislocations on the signal is dominant, but after that stage there is no effect of dislocations and the effect of voids will become significant.

Densification is another neutron-accelerated phenomenon. In the annealed state carbon in stainless steels is dissolved in the matrix. Carbon leaves solution to form a variety of metal carbide phases during thermal annealing and accelerated by displacing radiation. The partial molar volume of carbon is different in the matrix and carbide phases, and the metal matrix experiences a significant contraction as the carbon is removed, thereby causing an increase in the alloy density on the order of 0.2-0.6%, depending on the carbon content [4, 1].

The material parameters used for the model, including attenuation coefficients for grain boundaries, scattering objects such as voids and carbides, and dislocations, were determined from the literature, microscopic observations and experimentally-obtained ultrasonic signals using unirradiated archive materials. The material parameters are summarised in Table 2. Model calculations for unirradiated archive materials were performed so they could be validated by comparison with experimental data.
An ultrasonic wave travelling inside a material consists of many frequency components. The energy distribution at different frequencies can be obtained by taking the FFT (Fast Fourier Transform) of the back-wall reflection and backscattering echoes. Changes in material properties mean that some the frequency components are preferentially attenuated. This causes a change in the spectrum, which can be correlated with the change in material properties. As for the frequency spectra of the backscattering echo, time windows were selected before calculating the frequency spectra to allow focus on specific depth regions corresponding to them (see Fig. 2). The predicted frequency spectra of the back-wall echo and the backscattering echo of the archive material are shown in Figs. 3 and 4, respectively. The results were reasonably consistent with experimentally-obtained spectra using 10MHz immersion ultrasonic sensors as shown in Figs. 3 and 4.

Two model calculations were performed and the signals’ frequency spectrum changes due to microstructural changes were evaluated. The first calculations assumed individual component-induced changes and a homogeneous distribution of microstructures. The frequency spectrum changes in back-wall and backscattering echo, in the depth range 36-50 mm arising from 1.3% swelling, are shown in Figs. 5 and 6, respectively. In the back-wall echo the amplitude near the peak frequency decreases due to swelling. In the back-scattering echo, the amplitude in the higher-frequency region decreases.

Calculations for carbide formation are shown in Figs. 7 and 8. In this evaluation, the change in the sound velocity by carbide formation is assumed to be +2%, and the densification is assumed to be +0.6%. In the back-wall echo, the amplitude near the peak frequency increases, as opposed to that associated with swelling. In the backscattering echo, the amplitude of the higher frequency region increases.

The evaluations for dislocation with different average lengths are shown in Figs. 9 and 10. The amplitude in each case decreases due to dislocations.

A typical observed average level of void swelling across the block was 1.3%. In the original study there were spatial variations in neutron flux and radiation damage, and radial and axial variations in irradiation temperature, associated primarily with gradients in gamma heating and coolant flow. Therefore there were spatial variations, primarily in void swelling, often peaking in the middle of the block and only secondarily in carbide precipitates, with negligible variation in dislocations and grain boundaries [1, 2]. In other positions, there was a gradient in swelling from one side of the block to the other.

In order to evaluate the effect of the depth distribution of void swelling, four sets of model calculations were performed at different depth distributions of swelling, with the material divided into three 17mm-thick regions as measured from the ultrasonic introduction surface. As summarised in Table 3, in the first case, the swelling is set to be uniformly 1% in all regions. In the other cases there is 3% swelling in one of the regions and no swelling in the other two regions.

Area integrals with an interval ranging from 5MHz to 10MHz of the frequency spectra, calculated by the model versus the depth are shown in Fig. 11. The integral is normalised at a depth of 17mm. In cases A-2 and A-3, the magnitude of area integral increases in the swelling regions, compared to that in the uniform case. In case A-1, the magnitude is lower at all depths compared to that in uniform case, because the backscattering echo decreases due to swelling in Region 1.

The UT set-up is very common except that the frequency of the ultrasonic sensor is 10MHz, which is a little higher than that used for UT to detect macroscopic cracking. With an accurate sensor positioning tool, the system can be mounted on existing UT inspection field systems. For example, utilities have a long history of using UT systems to inspect baffle-former bolts of PWRs. BWR utilites are inspecting core shroud damages using UT systems. The bottom line is to measure clear ultrasonic signals with existing UT field inspection systems, and then, using the signals, we will calculate and simulate the microstructural changes induced by the irradiation. We are now working on using our ultrasonic system to detect irradiation damage of reactor vessels (embrittlement due to neutron irradiation).