A record-breaking year for US wind power

Affordable technology and a tax credit have helped give US wind energy its strongest year yet, writes Carl Levesque of AWEA. 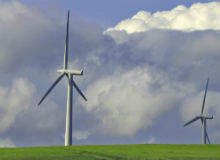 Once again, wind energy is proving to be a key player on the energy landscape in the US. Wind power’s affordability as well as the success of an effective federal policy helped drive turbine installations to record levels in 2012.

The country had added 4,728MW of wind power by the end of the third quarter, with an unprecedented 8,430MW under construction at the time of going to press. The wind energy industry also reached a symbolic milestone in 2012: in August, the US wind industry surpassed 50,000MW of total installed electrical generation capacity – enough to power 13 million homes.

Several factors have been at play in making 2012 a record year, particularly in the areas of policy and the cost of wind power. Greatly expanded US manufacturing, which now makes up to nearly 70% of the value of US-installed equipment, has cut transportation costs. Nearly 500 US-based manufacturing plants now serve the industry.

In addition, technological advances, such as higher towers and longer blades, make turbines more efficient and further drive down costs. Meanwhile, more electric utilities are locking in 20-25-year contracts for lower-priced wind power, to the benefit of their consumers.

Finally, on the policy front, there is the federal Production Tax Credit (PTC) for renewable energy, which has been kept continuously in place since 2005 and currently extends to the end of the year.

"This is what a successful policy looks like when it’s working," says Denise Bode, CEO of AWEA.

While policy stability has helped the industry become a mainstream energy source in the US, the PTC is scheduled to expire on 31 December 2012. However, action has already been taken to extend this effective tax credit. A proposal to extend the PTC for projects that start construction next year won bipartisan support from the Senate Committee on Finance on 2 August, as part of an overall ‘tax extenders’ package. It now awaits action by the full Congress, expected to take place during the ‘lame duck’ session that began after the presidential and congressional elections on 6 November.

"Wind energy fared well in the US presidential and congressional elections, with voters returning wind champions in both parties to Congress."

While the PTC’s status has created some uncertainty in the US wind energy industry, the wind energy incentive has as much bipartisan support as any tax policy up for action in the lame duck session of Congress. Another positive signal: wind energy fared well in the November presidential and congressional elections, with voters returning dozens of wind champions in both parties to Congress, and allowing the Obama administration’s support for wind energy to continue uninterrupted.

For these reasons, the industry believes the PTC will be extended, and wind will stay on schedule to make 20% of the UK’s electricity by 2030. Given that the PTC incentivises over $15bn a year in private investment in US wind farms, its economic impact is well known by members of Congress.

Meanwhile, the industry keeps going strong. The third quarter of 2012 saw 1,833MW of new installations, putting total US wind capacity at 51,628MW on 1 October. Over 40,000 wind turbines across the country can now produce enough electricity to power the equivalent of all the homes in the states of Colorado, Iowa, Michigan, Nevada and Ohio combined. Currently, five states obtain more than 10% of their electricity from wind and 13 more obtain over 5%.

The year-to-date total of 4,728MW at the end of the third quarter represents an increase of 40% from the same point in 2011. The average turbine size installed continues to hover around 2MW.

Among the more noteworthy trends, more than ever utilities are locking in wind power on long-term contracts. Over 80% of the new capacity coming online or under construction is covered by a long-term power offtake agreement, either through a power purchase agreement between a utility and a wind developer, or through direct utility ownership. In fact, projects online through the third quarter and under construction are either owned by or have contracted power with 68 different utilities. Thus the utility industry is becoming more familiar with the benefits of this clean, affordable energy source – a clear indication that wind power is here to stay.