To a higher degree in Sweden

Dr. Michel Cervantes describes how the need for more skilled professionals in the hydroelectric sector led to the formation of the Hydro Power Engineering Masters Programme at Luleå University of Technology, Sweden 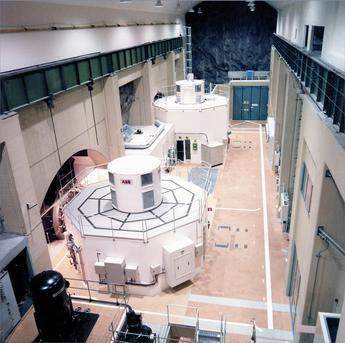 Hydro and nuclear power accounts for nearly 90% of electricity production in Sweden, while the remainder is mainly produced by thermal power or is imported. Hydro power has such a central role in Sweden that neglecting it could influence safety, welfare and growth of the society. When it was first implemented as an electricity source, hydro was expected to produce base power to the Swedish community, but this role changed with the introduction of nuclear power, which, by nature, is a base power. Today, hydro in Sweden is widely used to regulate power.

This situation is likely to change in the coming years, as nuclear power’s contribution is reduced and renewable sources of energy such as wind power and bio-energy are introduced. This will lead to new constraints on hydro power as an effect regulator, and may also increase hydro’s role in the country.

The need for knowledgable and skilled personnel in Sweden’s hydro industry is apparent for several reasons. Rehabilitation projects are being carried out on some of the country’s older dams, with some of the older machines in use at hydro projects also undergoing renovation.

Furthermore, structural changes, initiated at the end of the 1960s, have resulted in an age structure in the Swedish industry which implies that nearly 50% of its personal will retire within the next few years. The hydro power industry is small, composed of about 1000 people of which 200 have a Masters degree or equivalent and 20 a PhD. Therefore, the need for the next 10 years is small, about 40 engineers per year. But these engineers need to be highly skilled; they are expected to work as project leaders or consultants and have a broad base – from dam safety to generator technology. Hydro power stands for about 17% of the electricity production worldwide with an installed capacity of 737GW. It is today the world’s largest renewable source of energy. It has a major role in 55 countries and is still growing with 118GW of new capacity under construction (H.D. Altinbilek, 2004).

With nearly two thirds of the technical and economical potential unexploited mostly in Africa, Asia and South America, hydro power could have an increasing role – and the need for skilled hydro power professionals could escalate; especially with the political declaration of 154 Governments in Bonn, Germany at the International Conference for Renewable Energies, where hydro power was identified as one of the renewable technologies ‘to be substantially increased with a sense of urgency’ (H.D. Altinbilek, 2004).

It was with this in mind that the Hydro Power University (HPU) was created in 1997 by Luleå University of Technology, in collaboration with the hydro industry and Jokkmokk municipality. HPU encompasses education, research and development within hydro power in Sweden. The organisation offers a wide range of educational programmes from upper secondary school to PhD degrees designed in close collaboration with the industry, but most relevant here is HPU’s broad international hydro power Masters programme that starts on 1 September 2005, and will be open to new Swedish and foreign students free of charge every year. The HPU steering committee contains several representatives from the hydro power industry – alstom, GE Power, Vattenfall, Swedpower and Sweco. The partners involved are based at Luleå University of Technology, and Uppsala , Jokkmokk, Porjus and Älvkarleby (Figure 1).

This is the northern most technical university in Scandinavia, offering a broad scope of education and research. Research is conducted within the Faculty of Engineering and the Faculty of Arts and Sciences. About 12,500 students are enrolled, with a staff numbering 1500. LTU is involved with the HPU because of its notable standards of research and education within several disciplines: turbine technology; rotor dynamics; tribology; dam safety and maintenance and operation. Close to the Luleå river, which produces about 10% of Sweden’s electricity, LTU has set hydro power as a priority area. Today, 20 senior researchers and 20 PhD students are active in the field, with these numbers expected to increase in the coming years.

Founded in 1477, Uppsala is the oldest university in the Nordic countries, with a long tradition of research and innovative thinking. About 5600 people are employed here, of which about 3600 are lecturers and researchers. The university teaches about 38,300 undergraduate students, with education and research split into nine faculties. Uppsala University contributes to the HPU with its research and education on the subjects of power engineering and environment. Of special interest is Professor Mats Leijon, Chair at the Division of Electricity & Lightning research and inventor of the high voltage generator Powerformer. Two senior researchers and four PhD-level personnel are active at the university.

In Jokkmokk, Vattenfall Training Centre offers advanced education. The Centre has 20 years’ experience of providing advanced training in hydroelectric power in the national and international arenas, and has a fixed range of courses, including dam safety, hydroelectric power and mechanics. Clients here include companies who produce and distribute electricity, with the centre offering training on client’s premises. Young students interested in hydro power can follow a specific educational programme (in Swedish) at the Bokenskolan upper secondary school over two to three years. The educational programme allows them to start working or continue their education at the university to obtain a Master of science degree.

The result of an investment of over SEK100M (US$13M), the centre offers education, research and development facilities, including two full scale 10MW turbines (Figure 2). One turbine is a Kaplan model and is equipped with Powerformer generator technology, while the other is a Francis turbine with a conventional generator. The head is 54m with a maximum flow rate of about 20m3/sec. The turbines are exclusively dedicated for use in education, research and development. Several research projects within generator, bearings and turbine technology have been conducted at the centre (see References 2-5), and both units are at the centre of each education programme offered by HPU.

At Älvkarleby, spillways, discharge capacity and turbine model testing can be undertaken at the Vattenfall laboratory with experimental material and highly qualified staff (Figure 3).

Hydro power is a multidisciplinary field with civil, mechanical and power engineering. Most of the available education programmes deal with one of these disciplines. The goal of the Masters programme at HPU is to allow the students to obtain an overall picture of the field, to answer the need of the industry without neglecting the content. Such a programme aims to give the student a choice between a position as a specialist within a specific area, such as generator design, and a management position where discussions with specialists are required.

The programme comprises four terms (fourteen months) of course work; one term of course work in Uppsala, two terms in Luleå and ending with a one-term thesis project in Sweden or abroad. The different disciplines break down as follows:

Several laboratory experiments at Porjus and Älvkarleby are planned as part of the course, as well as visits along the Luleå river (Figure 4).

The programme starts every year at the end of September. The students spend the first two terms at Luleå University of Technology and move to Uppsala University for the third term. The fourth term is for the final degree project, which may be completed anywhere in the world.

The courses proposed are all in English and are as follows:

The students with sufficient knowledge within a topic may be exempt from the corresponding course and propose an alternative if desired. Swedish courses for beginners are also available to foreign students to facilitate their integration. Students who have successfully completed the programme will be awarded the Swedish degree Magisterexamen med huvudämne maskinteknik, inriktning vattenkraft, translated into English as Master of Science in Mechanical Engineering with specialisation in Hydro Power Engineering.

Professional work experience in a relevant field is considered a merit. Since traditionally there are more male students in this field of studies, female candidates especially are encouraged to apply. For more information about specific admission requirements, please visit the programme website: www.hpu.nu.

A good knowledge of written and spoken English is required; applicants must provide proof of their proficiency in English. LTU accepts a TOEFL test score of a minimum of 550, 213 in the computer-based test, 750 for TOEIC, or an IELTS score of at least 6.0 (more information on www.toefl.ora and www.jelts.org). Students from certain countries are exempt from providing a language test. Students do not pay any tuition fee to follow the Masters programme at LTU and Uppsala University. However, they must cover all living expenses and insurance costs in Sweden.

A small number of scholarships may be available from the Swedish Foundation for International Cooperation in Research and Higher Education (STINT), the Swedish International Development Cooperation Agency (Sida) or other organisations in Sweden. Students can also apply for scholarships from the Swedish Institute, (for more information and application forms, visit www.si.se). Other alternatives such as the World Bank or other institutions may also provide a scholarship. LTU and Uppsala University do not offer financial support or scholarships to foreign students. All applicants must use the standard application form available from November at www.ltu.se/fv/ubf/Antagningen/Master-info.php.

The form contains all necessary instructions and can be obtained from the programme coordinator or at www.hpu.nu. The
completed application form should be returned no later than
1 February each year.

A total of 114 applications were received by LTU for a total of 20 places before the deadline of 1 February 2005. The applications came from 28 countries:

• 6 from Ghana, Pakistan and Sweden.

• 2 from Nepal, Tanzania, Turkey and Uganda.

The marketing efforts have been relatively modest and concentrated in India; therefore the number of applications is satisfactory. The number of students from Sweden will increase in April, since Swedish students can apply until 15 April.

Most of the applications are from developing countries and a majority of applicants are interested in receiving the scholarship from the Swedish Institute, which LTU awards to the ten best students. Statistics from Luleå University of Technology indicate that for 100 foreign students accepted to follow the Masters programme, about one third of them will actually attempt it. The main reason for this discrepancy is due to the accommodation cost of about US$1000/month.

Such a project is time consuming and to succeed necessitates a commitment of the hydro power community; HPU is currently looking for guidance and collaboration to fulfil the project.

The project is co-financed by EU strukturfonder mål 1.