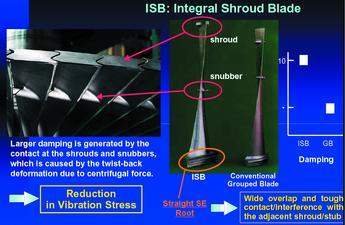 On 12 July Mitsubishi Heavy Industries (MHI) achieved what it claims to be a world first with the entry into commercial operation of a 600 MWe two-casing ultrasupercritical steam turbine, with steam conditions of 24.5MPa/600°C/600°C.

The plant, TEPCO’s Hirono 5 coal-fired unit, is also believed to be the first commercial application of 3000 rpm 48in steel blades. The development of these longer LP end blades was crucial to the realisation of the compact, two-casing, design employed at Hirono, which has one combined high/intermediate-pressure (HP–IP) turbine and one double-flow low-pressure (LP) turbine, instead of the typical three-casing design.

Following the success at Hirono 5, MHI has recently received orders for four 600MW two-casing ultrasupercritical steam turbines for two projects in China (two turbines per project) and believes there are a number of other potential applications for the technology there.

Describing the new turbine technology at the CEPSI 2004 conference (Shanghai, 18-22 October)* Junichi Ishiguro et al of MHI noted that the three-casing configuration – one combined HP–IP casing and two double-flow LP casings – was typical for steam turbines in the 500-600 MW range. But the two-casing design offers a number of advantages, including shortening of the total length of the turbine-generator unit by about 7m, reduced capital cost and simpler maintenance requirements.

In actual operation, Hirono 5 has proved very stable, Junichi Ishiguro et al reported, with low vibration levels measured at each bearing when the turbine was operating at rated output.

The new LP turbine frame in which the bearings and inner casing are directly supported by the foundation also contributes to this stability. High turbine efficiency was verified through performance tests carried out during commissioning, surpassing design values at all loads, they report.

Due to centrifugal force induced stress limitations, as the paper by Junichi Ishiguro et al explains, the length of LP end blades for steel material used to be restricted to about 33in for 3600 rpm and about 40in for 3000 rpm machines. For longer blades, titanium has been used, but is not the preferred material mainly due to high costs. In the late 1990’s, Junichi Ishiguro et al note, MHI started the development of 3600 rpm 40in and 3000 rpm 48in steel blades (scaled up from the 40in blades), applying advanced aerodynamic and mechanical design. In 1999, MHI completed the development of these new advanced blades “ahead of the industry”, they report, with 3600 rpm 40in blades operating in actual turbines since 2000 and applied to more than fifteen units. Now, with Hirono 5, which started up in March 2004, we have the first 3000 rpm 48in steel blades to enter operation.

The LP end blades are key to steam turbine design because they are determinants of performance, overall dimensions, and number of casings. To achieve the required length, MHI has adopted the ISB (integral shroud blade) structure, which provides a dramatic improvement in the reliability of the steam turbine, as well as the efficiency, Junichi Ishiguro et al report. In the ISB configuration, blades are continuously coupled by virtue of the blade untwist due to the centrifugal force. Because of large damping generated by the contact of shrouds or snubbers, vibratory stress reduces remarkably as compared with conventional grouped blades. The straight side-entry root assures wide overlap and strong contact of shrouds or snubbers with the adjacent blades.

The flow field of the LP end blades has a large expanding wall inclination due to the high-expansion ratio, therefore, it becomes very complicated because of the three-dimensional flow. Moreover, interaction between the shock wave and the boundary layer occurs because of the high Mach number flow. In the aerodynamic design, a fully three-dimensional approach was employed to reduce the blade loss and to optimise the flow pattern using a three-dimensional multi-stage viscous flow analysis code.

To confirm the vibratory characteristics of the newly developed blades, a rotating vibratory test was carried out. A test rotor with the actual blades assembled into a disc was set up in the vacuum chamber of MHI’s high-speed balancing facility. This rotor was spun up to 110% of the rated speed to measure the natural frequencies at rated speed, as well as the low and high cycle operating speed range.

In the final stage of verification, the efficiency and the reliability of the newly developed blades were confirmed using the model turbine test facility at MHI’s Takasago Machinery Works. Blades are tested in this facility under a wide range of operating regimes including severe conditions such as high loads and high condenser vacuums.

The new turbine builds on MHI experience with large capacity USC turbines and large capacity combined HP–IP frames. Among these is the 1050 MW Tachibana-wan No2 unit (25MPa/600°C/610°C), which uses a cross-compound configuration with separate HP and IP casings, and the 700 MW Kobe No 1 unit (24.2MPa/538°C/566°C), which employs a combined HP–IP frame.

USC steam conditions require additional rows for blading to achieve efficiency because of the increased heat drop in the turbine. Although elongation of the bearing span of the shaft can produce the space for additional rows, this has its limits, especially with the combined HP–IP frame, as the longer span may pose shaft dynamics issues. Based on experience of designing large capacity combined HP–IP frames and the application of reaction blades designed to have superior performance under a wide range of velocity ratios, the number of the rows and the dimensions, including the bearing span of the shaft, were optimised for both efficiency and reliability

Ferrite heat-resistant steels are widely employed for 600°C class high temperature turbines, eg 12Cr forged, 12Cr cast, and 9Cr forged steels, and these are employed in the high temperature parts of the Hirono No5 steam turbine.

In the combined HP–IP design, the steam from the control stage outlet flows along the rotor towards the IP section through the seals which divide the HP and IP sections. This steam acts as the cooling steam for the rotor around the main steam inlet. After passing through the seals, it enters the space between the IP inlet flow guide and the rotor, then flows into the cooling holes provided at the bottom of the grooves for fixing the rotating blades. Thanks to the cooling effect of this steam, the rotor surface at the IP inlet is not exposed directly to 600°C reheat steam.

Temperature measurements on the outer casing of Hirono 5 during commissioning showed that it was indeed effectively cooled by the HP exhaust steam, as envisaged in the original design concept, reported Junichi Ishiguro et al.

By applying advanced 12Cr steel with cobalt, which has been developed by MHI and which offers high temperature strength superior to New 12Cr or 9Cr steel, the combined HP–IP frame can be used up to 630°C class steam conditions which offers further improvements in thermal efficiency. This opens up the possibility of a 600-700 MW two-casing turbine operating at 630°C USC conditions.

Other potential applications of the 48in ISB technology include a 1000 MW tandem-compound turbine with two low pressure casings, each of which is identical to the low pressure turbine of Hirono 5, and a single cylinder reheat turbine for combined cycle applications.