Construction of a Fusegate system has been completed on a major project that provides additional water use whilst greatly enhancing flood protection in Tulare County, California, US 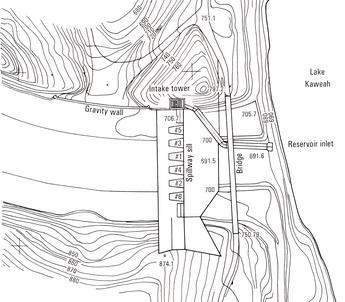 TERMINUS dam is the first line of flood protection defence for the town of Visalia and other highly vulnerable natural lands in California, US. The dam and reservoir, a US Army Corps of Engineers (USACE) flood control project, also provides water conservation storage for Kaweah river water users.

The project involves construction of the world’s largest Fusegates. The Fusegates, which permitted a saving of US$5M in the total project cost of $50M, are designed to overturn during a critical flood event to prevent the earth-fill dam from being eroded. The dam was completed in 1962, seven years after a massive Kaweah river flood inundated much of Visalia with a flow of 2400m3/sec.

During the feasibility stage, a 6.5m high ogee spillway was designed for storage increase. This alternative required a widening of the existing spillway from 41.1m to 134m in order to pass the revised Probable Maximum Flood (PMF). It was however found that the increased cost of environmental mitigation and spillway excavation resulted in a borderline project. To improve net benefits, Sacramento District investigated alternative spillway types, including a rubber dam and a curved spillway.

A preliminary process of selection led to the retention of only four design options. An evaluation matrix was then applied, considering a range of technical, environmental, social and economic issues.

The Fusegate alternative was selected because of environmental and budget advantages offered by the system. Since there was no requirement to widen the existing spillway, the amount of excavation works was minimal. In addition, the outflows for the raised spillway were nearly identical to the originally planned ogee spillway.

Another benefit is that Fusegates operate by themselves, as a result of the forces acting upon them. As such, they can offer a higher reliability of operation compared to other conventional spillway control systems.

Fusegates are an innovative non-mechanical spillway control system. A typical installation comprises of multiple units placed on a spillway crest. When installed, the Fusegates operate as a labyrinth weir, in which each unit represents one cycle of the labyrinth.

The Fusegates are held in place by gravity. For a moderate range of reservoir levels, the water flows over the Fusegates as it would over a labyrinth weir.

However, if the reservoir level exceeds a predetermined value, water flows through an inlet well into a cavity beneath the base of the Fusegate. The pressure generated by this flow creates an up thrust on the Fusegate causing it to overturn by rotating about its downstream edge.

Each Fusegate is set to overturn at a progressively higher reservoir elevation. For the maximum design discharge, usually equivalent to the PMF, all of the Fusegates tip and the entire crest length is available to pass the flow.

Instead of the main dam being damaged or breached, the Fusegates are washed away by the lake’s rising floodwaters. At Terminus dam, the type of storm that would cause the Fusegates to wash away has a probability of 700 years.

For the Terminus dam spillway, a total of six Fusegates were required, each 11.7m wide, 6.5m high, and 13m in length at the crest. The Fusegates fit in a 70.2m rectangular opening within the existing spillway. Concrete was preferred to steel for the construction of the Fusegates to reduce initial capital cost of the Fusegate system by 25% as well as maintenance costs during the life of the project.

Concrete overflow sections were constructed at either end of the Fusegates to the excavated faces of the spillway chute. The overflow sections are broadcrested weirs with a crest length of 12.68m and a crest width (parallel to flow) of 4.42m.

The Fusegates and overflow section sit on a 10m wide concrete base extended downstream by an additional concrete apron for invert protection. Their overspilling crest is set at elevation 217.9m or 6.5m above the former sill level.

The approach channel is formed in native rock and is 76m in length. The spillway exit channel is 290m long on a slope of 1.0%. The channels were trapezoidal in shape with a notched section that had a 41.1m bottom width and side slopes of 1V on 0.5H. Benches were excavated over the full length of the channels to provide sufficient flow capacity.

The normal reservoir levels will be maintained below the crest of the Fusegates, and flow over the Fusegates will not occur until the flood frequency exceeds a 69-year event.

Intake wells are normally constructed as part of the Fusegate. Since Terminus dam is located on a catchment with giant sequoias trees, some concerns about possible adverse effects of floating trunks arose. These debris could impact and damage the intake wells during floods. Therefore, the intake wells at Terminus are gathered within a protective enclosure located to the right abutments just upstream of the spillway and equipped with a bottom port to allow flow to enter. Pipes embedded in the concrete sill connect the intake wells to the base chamber of the Fusegates.

As part of the selection process, a nine-month hydraulic model-testing programme was undertaken and successfully completed in June 1999. A large physical model (23m by 16m in plan) at a scale of 1:30 was constructed at Utah State University to analyse the extreme flows and operating conditions.

The specific design concerns addressed by the model study included:

• The effect of the tailwater on the stability and aeration of the Fusegates.

• The mechanics and path of the tilting and tumbling of the Fusegates.

• The effect of debris on Fusegate operation and the effects of partially plugging the screens of the reservoir inlet.

• The aeration of the nappe over the Fusegates and possible vibration if aeration does not occur.

• The effect of increased roughness of the downstream exit channel.

• The effect of the blockage of drain holes and leakage of the Fusegate seals.

• The possible slip or side movement of the Fusegates due to flows from adjacent gates or flow through adjacent gate openings.

After the rigorous assessment of test results by an independent panel of experts, USACE decided to proceed with the detailed design and construction of this solution.

A US$8.7M contract was awarded in May 2003 for the second phase of the project to build the Fusegates and carry out other appurtenant works.

Works started in June 2003 with the casting of a waste slab up to 2.7 m thick to counteract highly fractured rock conditions. The Fusegate foundation includes 16 concrete slabs up to 2m thick tied to the rock face by 600 rock anchors.

Construction of the intake structure (protective enclosure) and the conduit was also undertaken.

Construction of the Fusegates began at the completed sections of the new sill. The concrete pouring was handled in three stages using a single shutter.

After completion, each Fusegate was lifted up to make sure there was no bonding between the Fusegate base and the spillway sill. This operation enabled the operators to check the need of additional ballast to adjust resisting moment to overturnings.

Rubber pressure seals were finally applied to the base of each Fusegate and the vertical interface between units to form a watertight barrier.

The project was completed mid-February 2004, nine months after the concrete pouring had started. This engineering solution raised the gross pool level of Terminus dam by 6.5m and saved several millions of dollars compared to conventional solutions. The Fusegates at Terminus dam are the largest ever built and will serve as a benchmark for future flood control and water storage projects worldwide.