The QSK60 diesel series gets a performance upgrade at 50 Hz

Cummins is building on the success of its 2.75 MVA 60 Hz QSK60 C2750D5B diesel genset by offering its 60 litre QSK60-G22 engine in a 50 Hz version of the series. Having previously only been available in the 60 Hz version, the new 50 Hz unit is being marketed in global markets as the only genset of its size able to deliver 2750 kVA of power utilising the powerful and more fuel-efficient 60 litre engine. Other generator set manufacturers in this range use engines that are up to 50% larger in engine displacement, according to Cummins, making the QSK60 the most cost-effective and most efficient power generating solution in its class. 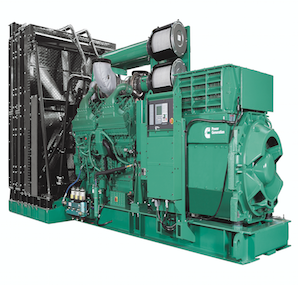 The C2750D5B is designed primarily for reliability in mission-critical applications that require quick, responsive emergency power. All components are designed, tested and supported to work together in this specific configuration, says Cummins. This is made possible because all the major components – engine, alternator, transfer switch and control system – are engineered and manufactured by a single supplier.