The greening of Drax and the economic realities

Drax has ambitious plans to increase its use of biomass, including conversion of one of its 660 MW coal fired units to 100% biomass, construction of dedicated biomass power plants and greater use of existing co-firing facilities. But it thinks the UK's mechanisms for incentivising biomass need changing. 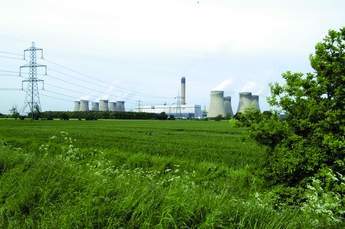 With the recent completion of its massive direct injection biomass co-firing facility – the world’s largest such installation to date – the 4000 MWe Drax coal fired plant in the UK now has the capability to generate some 500 MWe from biomass (corresponding to around 12.5% of its installed capacity). In addition Drax Group is at the “advanced feasibility stage”, in partnership with Siemens Project Ventures, of a £2 billion plan to build three stand-alone biomass-fired plants of 290 MWe each (one adjacent to the existing plant, one near Hull and another at Immingham). And Drax’s biomass aspirations do not stop there: it is now contemplating converting one of the coal plant’s six 660 MWe units to 100% biomass firing, with conversion of other units in the longer term should that prove successful.

But to make all these projects economically worthwhile, including full operation of the new £80 million co-firing installation – currently operating at only half its capacity or less – Drax says there need to be changes in the UK government’s support scheme for biomass.

The company has set out the case for increased use of biomass as a means of cutting CO2 emissions, and the policy changes it would like to see, in a recently published briefing document, Biomass: the fourth energy source.

Drax is basically interested in three types of biomass: agricultural residues; forestry products and residues; and energy crops. Recovered wood, eg from demolition, is also considered to be a potentially useful source of biomass.

Agricultural residues include the byproducts of food production, such as straw, oat husks, peanut husks, grape ?our, cocoa shells, and olive cake, among many others. Because they are byproducts of food production they do not reduce the amount of land available for farming, and they are readily available. Residues from non-food crops, such as cork ?nes, can also be used.

Energy crops are crops that are planted speci?cally for the purpose of producing energy. They include short rotation coppice willow and miscanthus, commonly known as elephant grass. The briefing document notes that since the start of the UK’s Energy Crop Scheme in 2000, “thousands of hectares of miscanthus and other short rotation coppice crops have been planted in the UK alone and there is the potential to increase this.”

An attractive feature of biomass, according to Drax, is that is plentiful, the fourth largest energy resource in the world after oil, coal and gas (according to the IEA), and hence the title of the Drax briefing document.

Drax says it has, for some years, been at the forefront of encouraging UK farmers and landowners to develop a UK biomass supply chain, including the ‘Green Shoots’ programme it launched in 2009 to source energy crops such as miscanthus, short rotation coppice willow and straw.

Drax has already built a straw pellet plant, in Goole, which is now processing straw purchased from local farmers into a form readily usable for electricity production. The plant, which opened in 2009, can produce some 100 000 tonnes of straw pellets per year.

It is also recognised that imported material will play an important role in the expansion of electricity generation from biomass in the UK, and the “global supply is plentiful” says Drax. And as supply chains mature more sources will become available.

As well as being plentiful, biomass can also play a major role in achieving renewables targets, Drax believes. The EU has indicated that the use of biomass will double over the next few years, and be responsible for around a half of the total effort in reaching the EU’s 20% renewable energy target by 2020. It is also thought biomass will play a similarly central role in the UK’s transition towards a low carbon economy. In fact, the Drax briefing document shows that, in the UK, biomass has already produced more electricity than any other renewable source – but since about 2005 the contribution has been constrained, “due to the policy environment”, Drax believes.

Biomass suppliers to Drax are required to provide all their supply chain data to enable an accurate ‘?eld to furnace’ calculation of greenhouse gas emissions, which is veri?ed by independent auditors. ‘Field to furnace’ takes into account the full life cycle analysis of the biomass materials burned, including land use change, plantation establishment, cultivation, harvesting, processing, transportation and combustion.

According to the Drax briefing document, life cycle analyses show that even imported biomass can achieve significant CO2 savings relative to gas-?red generation.

Another attractive feature of biomass plants, as described in the Drax briefing document, is their relatively high load factors compared with renewables such as wind (about 90%, compared with around 35% for offshore wind).

They are also flexible, and “unlike wind, solar or tidal generation it is easy for biomass-?red generation to respond quickly to changes in demand on the electricity system or sudden falls in the supply provided by intermittent generators.” In fact, says the Drax briefing document, “it is a straight choice between biomass and fossil fuels when it comes to balancing supply and demand across the electricity system because most other technologies cannot respond to changes in demand so quickly.”

Flexibility is indeed one of the current selling points of the existing Drax coal plant (although it was initially built principally for baseload operation), and Drax believes flexibility will command increasing value in the UK power market (it has a firm frequency response contract with National Grid during summer overnights and can provide +270 MW /-210 MW response capability in 10 seconds).

Changes needed to the

As with most other renewable technologies, it is more expensive to generate electricity from biomass than from burning fossil fuels. This is not surprising, says Drax “given that our infrastructure and economy has been built on high carbon fuel sources for decades and even centuries.” Biomass, in common with other renewables, therefore, requires support.

Although this is recognised through the Renewables Obligation (RO) support mechanism (which uses a system of tradeable Renewables Obligation Certificates, ROCs) and although the RO has been redesigned to address the fact that some technologies require greater support than others (via “banding”), the “thinking around biomass is outdated and nowhere more so than in relation to co-?ring with coal,” says Drax.

“The RO was designed as a technology-based mechanism to add diversity to the energy mix, not as a mechanism to reward CO2 emissions reduction.” Prior to 2002, when the RO was being formulated, “it was believed that coal-fired generation would shrink dramatically or even disappear altogether within a decade.”

Co-?ring, although recognised as a renewable technology under the RO, was seen as the much needed catalyst to establish a biomass supply chain in the UK and pave the way for the development of new dedicated biomass plants, the Drax briefing document says. However, the role of co-?ring in reducing the CO2 emissions of coal-?red plants was not properly acknowledged and, therefore, the current RO scheme places limits on the amount of co-?ring that can be done (because of initial fears that it might flood the ROCs market).

That thinking has been increasingly challenged and it is now apparent that carbon abated fossil fuel technologies have an important role to play in the longer term energy mix of the country, says the briefing document. “This is due to the vital contribution that they will make to security of supply, through providing diversity to the energy mix, and offering high availability, reliability and ?exibility,” it says.

With large scale and commercially proven carbon capture and storage (CCS) still some years away, there is no need to sit and wait when co-?ring can deliver meaningful CO2 savings today, says Drax, “yet the contribution from biomass has been constrained from the outset, and although there have been some improvements in the regulatory environment it is still constrained today and innovation is unfairly penalised.

The support for co-?ring is to be subject to a review starting later in the year and will need to increase if the full potential of the technology is to be realised, Drax says.

In addition, the current renewables regime caps the amount of regular (non-energy crop) biomass co-firing that can be supported in any one year – to 12.5% of the ROCs presented by any single supplier. But, according to Drax, independent research (by Oxera) has now demonstrated that the removal of this cap would not undermine the renewables support regime and is no longer needed.

Drax would also like demonstration of 100% conversion of one of its coal units to biomass to be supported in some way, and a band introduced for this type of facility (not currently mentioned in the RO scheme).

Conversions of coal units to 100% biomass have been done (the first such project being probably that at the 80 MWe Les Awirs 4 unit in Belgium back in 2005), but nowhere near the scale proposed by Drax, with the largest such project to date thought to be that planned at Electrabel’s 180 MW Rodenhuize unit 4, the Max Green project.

Under the current UK regime the level for a dedicated plant employing regular (non-energy) biomass is 1.5 ROC/MWh and that for a dedicated plant burning energy crops is 2 ROC/MWh. But even with these relatively generous levels of support, Drax has concerns, in particular because there is no guarantee of the level of support over the project’s lifetime. “The uncertainty this creates has undermined investment decisions,” says Drax.

Drax believes its analysis leads to three ‘quick win’ solutions for the policy framework that could deliver cost effective reductions in CO2 emissions and boost renewables in the very near term: first, facilitating a demonstration project to convert a coal-?red generating unit to biomass; second, providing certainty and ensuring a level investment environment by guaranteeing support for dedicated biomass plants over their lifetimes; and third, increasing the level of support for biomass co-?ring and removing the cap.

Given “the right policy framework all developers of biomass projects can plan for the future with con?dence” and Drax, for its part, says it will:

• Begin engineering design work on one of its generating units to demonstrate full conversion to biomass. This will require demonstration of conversion to be facilitated under the RO mechanism.

• Move forward in partnership with Siemens Project Ventures with the £2 billion development of its three 290 MW dedicated biomass-?red power plants, subject to the economic case being proven. This will require a guaranteed level of RO support over the lifetime of the plants through adequate ‘grandfathering’ provisions. And

• “Optimise” (ie increase) the amount of biomass co-?red with coal at Drax. This will require an increase in the level of support and removal of the cap on co-?ring under the RO. As already noted the co-firing burn at Drax is currently well below the design capacity of the new equipment.