The EU Upwind programme includes a ‘lighthouse’ project aimed at creating a 20 MW European wind turbine. This account of progress in the upscaling R&D has been derived from an original paper by Bernard Bulder of the ERC. 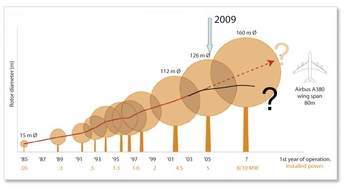 The broad aim of the 20 MW ‘lighthouse’ project is to develop the technology that will allow markedly increased wind turbine size, in particular for offshore wind farms, and gain the economies of scale and reduced site areas that should follow.

Although there are 6 MW wind turbines on the market and some makers are trying to stretch that to 7 and 7.5 MW the figure that characterises today’s top of the range machines is 5 MW. Figure 1 shows the scaling up that has taken place since 1985, a remarkable degree of change in getting from 50 kW to 100 times that capacity in 20 years, and one that might imply that the next stage of development, to get from 5 MW to

20 MW, should not be difficult. Although upscaling does not directly lead to lower cost of wind generated electricity the wind turbine manufacturers have been able so far to introduce technology changes that do achieve this.

Classic scaling rules indicate that the mass of wind turbine components increases with the cubic power of size while the energy yield increases only with the square of size. Designers have been able to bypass these rules with innovations in materials and manufacturing leading ultimately to a lower cost of energy. However, as is shown in Figure 1 the increase in size has been slowing down in the last couple of years.

The nature of the problem

The table shows how, following classical scaling rules, one would expect linear size (as represented by blade length) to affect the main variables. Just as important, it shows the rate at which the limiting factors such as mass and stress work against the pursuit simply of a high output rating. Most important among these limiting factors are the mass and aerodynamic forces which accelerate at rates higher than or as great as the increase in electrical energy output.

Centrifugal stresses and aerodynamic stresses are size independent, under the condition that the tip speed is kept constant and are therefore effectively neutral in their effect, while weight related stresses increase in proportion to blade length leading to buckling and low cycle fatigue failure in longer blades. And although energy yield increases as a square of the blade length because of swept area, mass, which can be equated to cost, increases faster, as the cube of radius.

Judged by these simple rules the justification for up-scaling is far from obvious. In reality it turns out to be more complex and less obvious still.

On the face of it energy yield is proportional to blade length (turbine radius) squared but in reality the increase in hub height brings the turbine blades into higher wind streams of greater speed, increasing the yield, while for a wind farm with a given nominal power a smaller number of higher capacity turbines produces lower wake losses than a larger number of small ones. The combined effect is to increase the relationship with R to R2.2 or R2.3 rather than R2.

For the blades, scaling rules indicate a mass increase proportional to R3, but this is reduced by increases in structural efficiency, leading to a theoretical exponent near 2.8, usually expressed as 2.8x. In practice this turns out to be nearer 2.0x.

The breakdown of offshore costs (Figure 2) provides a clue to the cost efficiency of upscaling. Half the cost is in the foundation and hardware (tower, turbine, generator) and getting power to shore, while around 20% is in assembly, transport, construction and miscellaneous erection costs. A huge 30% or so is spent on O & M. Studies have shown that installation and O & M costs are in practice proportional to R2.

By classical scaling rules, upscaling would not be economically feasible, but owing to technology updates and to the fact that for larger machines one can apply more expensive systems, the upscaling of wind turbines has always been driven by cost reduction. However at present it seems that the increase in the size is decelerating. Reasons for that can be for example that all the easy routes to achieve upsizing goals have been reached and that the more difficult technology improvements need more time to be applied.

In reality of course, one cannot really beat the scaling rules. What actually happens is that other concepts or different technologies are applied. This creates a new cost-versus-dimension curve which is a little more favourable at larger dimensions. When the resulting numbers are put into an individual relationship, for example the weight of rotor blades for rotor diameters of 20 m to 120 m, is turns out that the relation between the weight and the blade length has a size relation of R2 instead of R3 as predicted by the rules.

Current state of the art machines are based on the three-bladed, variable speed, collective pitch concept. Alternative ideas that seem to be promising include:

• the concept of down wind instead of up wind rotors

• robust machines. Reliability is very important, especially offshore. While on-shore wind turbines can be repaired relatively quickly and cheaply, resulting in a system availability close to 100%, offshore the situation is totally different. Simple failures that could be repaired on shore within hours can take days offshore. Reaction time is longer and the influence of weather and consequently of the swell and surface waves can make it difficult or even impossible to approach the machine for repair.

The use of innovative materials, mainly for blades, such as hybrid rotor blades with their advantages of increased stiffness with reduced weight, and thermo-plastics that can produce blades in reduced mould time and therefore at lower cost, has led to certain benefits. These include a reduction in loading: reduced materials fatigue by using designs based on individual blade pitch control; alleviated loading by individual flap control; and the concept of integrated design – not wind turbines consisting of optimised components, but optimised wind turbines.

Increasing the scale of existing wind turbine machines does not automatically produce economies of scale by any obvious means, but experience to date shows that an intelligent approach to the problem should make it possible.