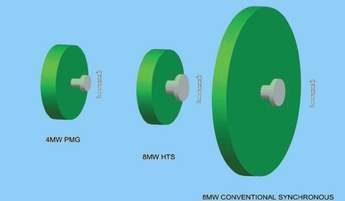 Superconducting variable speed generators could play an important role in the expansion of small hydro power. Historically, electrical machine designers have always sought to increase the power density and rating of units.

First improvements were made in the machine coil and magnetic topologies, and after this development focused on materials and production techniques. Modern power electronic converters finally improved the controllability of simpler and smaller machines to a degree that brought them close to what can be achieved with copper electrical conductors.

In contrast to copper, superconductors transmit electric power virtually without any Ohmic losses and can carry power densities that exceed the limitations of conventional conductors by up to 100 times. The scientific finding that quicksilver and various other metals and alloys lose their Ohmic resistance at temperatures close to absolute zero (-273.15°C) dates back to 1911. But the superconductive effect was used only for a very limited number of purposes, since the required temperatures had to be provided by complex and energy consuming cooling technology employing liquid helium.

The first projects with superconductor-based generators back in the late 1970s concentrated on the construction of demonstrators. The situation changed in 1986 when a class of oxide-ceramic materials were found to develop superconductive properties at significantly higher temperatures, around -190 °C. Today, a first generation of superconductive wires of this kind is commercially available. It can be brought to its operating temperature by off-the-shelf cooling systems.

Until recently the superconducting material has been relatively expensive as it contains a large fraction of silver. However, the development of superconductive wire that will be available at a price level below that of copper litz wire, and which has a similar current carrying capacity, has reached an advanced stage. The availability of this material will be the decisive factor for a widespread application of the technology.

Reduction in size and weight

Structural requirements for the machine housing and related expenditure are significantly lower than with conventional generators. Refurbishment or rehabilitation of small hydro plants does not require major construction work on buildings at all, even if power ratings are increased. This is important since many heritage plants have become landmarked buildings.

In the past, taking the decision for or against a direct coupling of turbine and generator was one of the most important issues in planning small hydro power plants. Often, high speed generators with low pole numbers were preferred over the far larger and heavier multi-polar direct drive machines. In this case, a gearbox is installed between turbine and generator to enable the production of AC with a grid frequency of 60Hz (US) or 50Hz (Europe). An array of this kind, however, not only increases the technical intricacy of the system but also diminishes its efficiency. Even if the gearbox is designed and finished with some care, every stage of transmission will cause a loss of input power on the order of 2-3% that can be avoided altogether with a direct drive system.

Superconductor-based synchronous generators facilitate the direct coupling of turbine and generator. Apart from the smaller size and lower weight – which are also beneficial for bulb turbine designs – the operational behaviour of the new machines presents a considerable advantage.

The efficiency of a run-of-river power plant fundamentally depends on the extent to which it can convert the energy of the water flow into electric power, considering that the water flow is volatile during the course of the year. If operated at fixed speed, turbines deliver acceptable or good efficiencies only when run at part loads of 75-95%. The volume of water fed to each unit must be regulated with a certain precision to keep the machines within this relatively small segment. Appropriate volume control systems are technically exacting and cause considerable additional construction and operational cost. Refraining from this investment, however, will leave the power plant to lag behind its potential over the larger part of the load range.

Superconductor-based synchronous generators considerably reduce the requirements on volume control. They are productive over a larger part of the load range and deliver better efficiencies than conventional machines. At rated speed, their coefficient of performance goes up steeply even with low turbine shaft power. With the power output at 10% of the turbine’s rating, the efficiency reaches 95% and at part loads above 30% a superconductor-based generator converts 98% of the power input into electric energy.

Superconductor-based generators deliver >2% higher efficiencies than conventional machines on the newest stage of development and operating at optimum conditions. If compared to older systems, the gains are considerably larger. In practice, the fixed speed operation of superconductor-based generators will probably remain an exception limited to relatively few modernisation or rehabilitation projects. If turbine ratings can be increased, superconductor machines enable higher plant productivities without structural alterations of the building. Moreover, the lower reactance of the generator helps to improve the stability of the electric power grid.

Newly built, refurbished or rehabilitated small hydro plants can be prepared for variable-speed generator operation by employing modern power electronics. If a four quadrant drive is introduced to separate generator speed from power grid frequency, the plant’s turbines can be operated with a volatile water flow at far better efficiencies than achievable with a conventional layout. If the turbine is allowed to run at optimum speed for the respective water flow its shaft power increases in proportion to the flow rate. If, on the other hand, the turbine converts the energy of the water at a fixed rotational speed – as required in grid synchronous operation – its shaft power is considerably lower over large parts of the load than with variable speed operation.

Improved turbine efficiencies can be gained most notably in the low and middle part load range. This applies not only with Kaplan turbines; straightforward propeller turbines also deliver substantially higher shaft power at part load and overload if operated at variable speed.

A frequency converter reduces the operating cost of power generation systems by making gearboxes expendable. Integrating the plant into a smart grid management system is facilitated while the system’s circuit feedback is kept low and no longer requires reactive power compensation. To the contrary, the power plant can provide reactive power for grid regulation and serve to compensate the circuit feedback of other grid loads (power factor correction – PFC).

Superconductor-based generators further enhance the gains in efficiency that can be achieved by variable speed turbine operation. Combining both technologies in newly built or modernised small hydro power plants offers various options to reach the best possible ratio of productivity and investment requirement for individual projects. Where new plants are projected, planning, construction and components can be standardised further than was possible before. Variable speed systems operate with equally high efficiency over a very wide load range while their demands on water flow regulation are low. The 80% decrease in size and weight of superconductor-based generators contributes to financial economy as well. In heritage plants, the implementation of just one unit optimised for variable speed (direct drive superconductor-based generator plus power converter) is often enough to raise the facility’s annual power production by 10-15% through better use of varying water flows and improved overall efficiency. In plants constructed during the first half of the 20th century productivity gains are regularly higher.

The potentials that can be gained by modernising heritage small hydro plants can be shown by the example of Hirschaid run-of-river plant, on the river Regnitz in Germany. The Bavarian plant was first commissioned in 1923 and has three generators which are driven by twin Francis units at a rated capacity of 1.25MW each. Today, E.ON Wasserkraft, the water power division of one of Europe’s large utilities, operates the plant.

E.ON decided to implement a superconductor-based generator at the plant and to commence operation of what is the world’s first commercial system of this kind. Design and construction of the

generator were headed by Converteam while the German superconductor manufacturer Zenergy Power provided the superconducting components. Within the Hydrogenie development project sponsored by the European Union, E.ON commissioned KEMA Nederland BV to evaluate the machine. The findings convinced E.ON to make full use of the plant’s potential.

The rotor of the Converteam generator is equipped with superconductive field windings and is thermally insulated in a cryostat. The cryostat’s walls fit into the air gap between the machine’s rotor and stator. This layout is characterised by low technical complexity and high reliability. It is facilitated by the very high magnetic flux densities delivered by the generator’s superconductive rotor coils. The cooling system consists of off-the-shelf components and keeps the evacuated interior of the cryostat constantly at a temperature of -250°C. To minimise thermal loss, the excitation current for the superconductive field windings are supplied by a brushless exciter. The power consumption of the cooling system is 10kW.

KEMA confirmed in its evaluation that the Converteam machine was well suited for optimising existing hydro power plants. In Europe, where this task has priority over the construction of new capacity at present, large power utilities are following the development closely.

Zenergy Power has also been commissioned by RWE, another large European utility, to assess the potential for retrofitting run-of-river power plants with superconductor based generators on the river Mosel in Germany. If the projects in Germany prove successful, they could become the starting point of an efficiency increase in small hydro plants and a substantial growth of capacity in both the US and Europe.