Sun, wind and storage – a partnership in the making

The rise in wind and solar generation has led to an increase in the number of renewables/storage combinations. For remote off-grid communities this combination is a natural fit for microgrid systems. Staff report 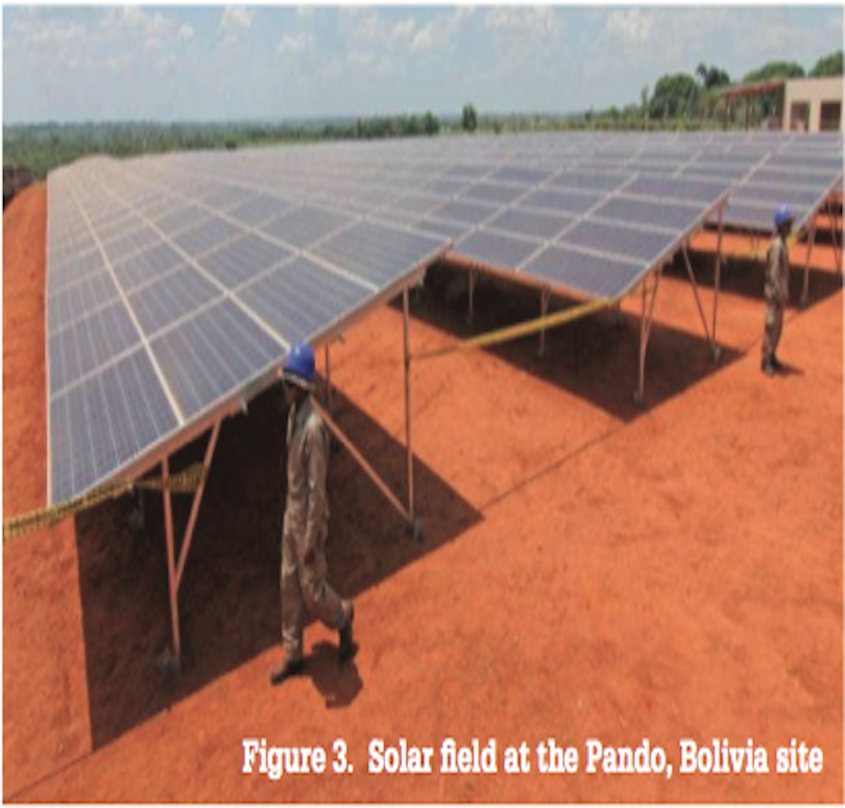 The storage solution is starting to become a standard response to the problem of providing grid stability in areas where significant proportions of renewables are online, in particular where the location is remote or has a weak grid connection. At the same time there is a growing worldwide trend for microgrid installations in communities and industrial facilities to improve the reliability and autonomy of their electricity supply as well as meet growing demand and optimise operating costs.

Conventionally, operators of remote systems have relied on diesel generators. But they are now turning to renewables and especially solar photovoltaic installations to reduce their reliance on diesel fuel. Creating schemes in which diesel generation and PV plant complement each other can offer considerable savings in terms of the cost of fuel, transport and handling as well as maintenance, as the gensets are required for fewer hours. There are also environmental benefits from reduced greenhouse gas emissions.

Off-grid microgrids typically provide power for remote villages, industrial operations and military bases. These usually have a very high cost of generation as they are totally dependent on diesel fuel. Adding renewables to microgrids in the form of solar and wind power is also an increasingly attractive option. The cost of solar and wind per kilowatt-hour is significantly lower than power from diesel generators but because of the intermittency of renewables, generator sets are still needed to ensure network stability.

Using standard power electronics, PV can contribute up to 20 – 30% of the power that would be generated by the diesel genset during daytime hours. Adding dedicated software can increase the penetration of PV to 50 – 60 %.

When an energy storage system (ESS) is added, an operator can maximise the contribution of renewables, increasing the penetration and making use of all the PV power available. It is possible with this arrangement to realise fuel savings of 50 to 75 %.

Li-ion battery systems have emerged as the technology of choice for energy storage due to the chemistry’s high energy density that enables significant levels of storage capacity to be packed into a relatively compact footprint. Li-ion ESSs are now able to deliver energy at the megawatt scale, and integrated containerised systems can be connected in parallel to deliver multiple megawatt-hour storage capacity.

From a technical and economic point of view, energy storage has three drivers. The first is that increasing the usage of PV reduces the running hours of the genset. In addition, the power output of the PV panels are smoothed so that the genset will need to start and stop less often to compensate for the variation in PV.

Second, the diesel genset will be able to run at its point of maximum efficiency, rather than ramping up and down to meet changing demand. This reduces operational and maintenance costs as well as idle running to provide spinning reserves.

Thirdly, integrating energy storage enables an operator to start its genset only when needed to support loads or to charge the battery.

Consider an industrial microgrid with a 12 MW load (Figure 1). This would typically be supplied by six gensets, each rated at 2 MW. The charts show the result of modelling the impact of adding 60 to 150% of PV production (between 7.5 and 18 MWe), and energy storage to fulfil the roles of power smoothing and time shifting. Despite increased PV, the fuel savings will level out unless a battery is installed owing to the “must run” load on the diesel generator. In addition it is not possible to store the surplus PV generation.

Power smoothing requires a relatively small ESS that can deliver power for 20 minutes to compensate for changing weather conditions. In this case the ESS delivers savings by avoiding the need to ramp the diesel gensets up and down. However, the gensets are still required to provide spinning reserve and recharge the battery when PV production is low.

Without an ESS, an operator can achieve incremental savings as additional PV is incorporated. But introducing a battery helps to realise significantly more savings, in fact for power smoothing a medium sized battery is a better option for optimising PV penetration than adding extra panels.

In this case, a battery sized at about 40% of the system power (4.6 MW) and 20 minute discharge is sufficient to provide a 50% decrease in fuel consumption. This is estimated to save up to four million litres of fuel a year, with PV contributing between 7.5 and 11.5 MWe. Any further increase in battery power would only deliver marginal additional fuel savings.

For time shifting applications, a larger battery will supply two hours of energy storage so that PV energy generated during the peak hours of daylight can be used during the hours of peak demand in the morning and evening. The larger battery used in this mode enables greater levels of PV to be integrated. At up to 18 MWp of additional PV, this represents up to 150% of the capacity of the diesel gensets.

Running the microgrid using only PV and energy storage in this typical system, there is potential for diesel savings of almost 10 million litres per year. This does require careful system sizing and sophisticated control electronics and control as there is no spinning reserve immediately available. In this case the battery must be able to provide all the power if there is a sudden drop in PV production.

Industrial battery maker Saft now lists a number of reference plants that are hybrid installations with large storage facilities. The most significant of them is located in Bolivia. In 2014 Saft’s energy storage business made an important breakthrough in Latin America with a contract to supply a hybrid power plant, the Pando project in Bolivia, with a MW-scale lithium-ion battery storage in the form of two containerised systems. This became the world’s largest solar photovoltaic and diesel generation hybrid power plant. It was Saft’s first for an energy storage system in South America, which has become a target market because of the growing demand for renewable energy and solar PV in particular.

Pando is in the remote tropical northern area of Bolivia in the Amazonian rain forest. It is not connected to the country’s national grid, resulting in electricity coverage of only 65%, with the 37 GWh demand met exclusively by diesel generation. The plant, which combines a 5 MW PV array with 16 MW diesel generation, was constructed by Isotron SAU, a subsidiary of Spain’s Isastur Group.

The energy storage system consists of two Intensium Max 20 M medium power Li-ion battery systems, each with a nominal storage capacity of 580 kWh and 1.1 MW peak power output. The batteries are operating in combination with inverters and intelligent control systems that enable large amounts of solar power to be integrated into diesel powered grids, conferring system stability and smooth control of the diesel gensets. The plant was fully operational by early 2015.

In 2014 Saft was awarded a contract by Kauai Island Utility Co- operative (KIUC) to provide a 6 MW/4.63 MWh battery-based energy storage system as part of a 12 MW solar project in Anahola, Hawaii, sized to generate 20% of Kauai’s electricity. It is intended to provide frequency support, voltage regulation and energy reserve functions for the local grid.

The KIUC is the only franchised provider of electric service to its consumers on the island of Kauai, which has a population of 65 000. The utility’s all-year peak load is 78 MW through 13 substations. It built the $54 million solar energy park in partnership with the Department of Hawaiian Home Lands and the Homestead Community Development Corp in an effort to diversify its generating portfolio. As part of the agreement, Saft provided eight Intensium Max 20A lithium-ion containerised batteries. Two additional containers house ABB PCS inverters.

The electricity generated at Anahola allows the co-operative to reduce carbon emissions by 18 000 tons per year and eliminates the need for 1.7 million gallons of oil that were imported annually to generate electricity. It is also the state’s largest solar project.

By the end of 2015, 37% of the electricity generated on Kauai was coming from a mix of renewable resources – solar, hydropower and biomass.

In March 2016 Saft was awarded the contract to supply Li-ion battery systems for a solar project in Puerto Rico located at Salinas, in the north of the island. The contract was awarded by Windmar, and was for the provision of three Intensium Max 20P high-power lithium-ion (Li-ion) battery containers. The technology is there to provide ramp-rate control and frequency response for the Salinas 10 MW solar photovoltaic facility.

The fully-integrated containers include modular battery architecture, battery management and active cooling systems, fire suppression and power and communication interfaces. They are expected to operate reliably for at least ten years to help stabilise Puerto Rico’s island network as increasing levels of renewables are deployed. The island’s Renewable Portfolio Standard (RPS) requires Puerto Rico Electric Power Authority (PREPA) to obtain 20% of its electricity from renewable sources by 2035, which is a considerable challenge – in 2013 only one percent of the island’s electricity came from renewables. With this installation, Windmar can meet PREPA’s minimum technical requirements of 4.5 MW of peak power for ramp-rate control and 1 MW for frequency response.