Striking a middle ground for dams, people and nature 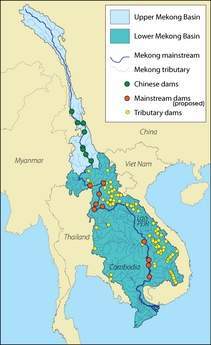 The province of Quang Nam lies in the heart of the Central Annamites landscape, a stunning and biodiversity-rich stretch of forests that covers vast expanses of Vietnam and Laos PDR. It is here that in March 2008, provincial chairman Nguyen Duc Hai made a landmark decision to endorse the recommendations of a strategic environmental assessment for hydro power in the Vu Gia-Thu Bon river basin. What made the chairman’s decision unique is that the recommendations called for maintaining some rivers in the basin completely intact from headwaters to sea.

With energy demand in Vietnam projected to continue growing at a high pace over the next ten years, decisions of this kind will increasingly have to be made in the region over the years to come. How can we find a middle ground that satisfies energy needs while ensuring that vital ecosystem services in the Mekong basin are sustained?

The case of Quang Nam Province’s Vu Gia-Thu Bon river basin is illustrative of the considerations facing developers when tackling hydro power development. At a larger scale in the Greater Mekong Subregion, the direction that politicians and dam developers will take with respect to how they plan and build hydro power projects is likely to substantially affect the fate of millions of people, as well as the ecosystems they rely on – especially the Mekong river.

The Mekong river’s mainstream is a major 4800km waterway that forms high up in the Tibetan highlands and eventually spills into the South China Sea. Across its course, the river drains a total catchment area of 795,000km2 within the Tibet Autonomous Region and the provinces of Qin Hai and Yunnan (People’s Republic of China), Myanmar, Laos PDR, Thailand, Cambodia and Vietnam. The upper Mekong basin covers 24% of this area. Once the Mekong river reaches the lower basin (LMB), two kinds of major tributaries develop: those that contribute to the major wet season flows, and others that drain low relief regions of lower rainfall. Where the Mekong river crosses the border into Cambodia, more than 95% of the flows have already joined the river. From here on until the mouth of the river, the relief is flat and the movement of water is mostly determined by water levels rather than flows.

The Mekong river is the world’s largest inland fishery, with 1300 species of fish known to science, of which 600 are migratory. Four of the ten largest freshwater fish in the world are also found here, including the Mekong giant catfish and the freshwater stingray, which makes this waterway the most diverse river per square kilometre in the world. Fish are the main source of animal protein and micronutrients for the 70M people who depend on the river. As a sector, fisheries resources in the Mekong basin are worth more than US$2.5B per year.

The Mekong river owes much of its ecological integrity and high biodiversity to the fact that it remains relatively untouched compared to other large rivers around the world. As of 2008, there are 82 existing large hydro power dams in the Greater Mekong Subregion. At about 3200MW, this represents approximately 10% of an estimated potential of 30,000MW for the LMB. However, this situation is changing rapidly.

Due to sustained high electricity demand in China, Thailand and Vietnam, more hydro projects are being constructed and planned in the LMB tributaries and mainstream. A further 3200MW are under construction and more than 50 new memoranda of understanding are the precursors to a range of feasibility studies for new projects over the next decade. Several hydro projects are also under construction on the mainstream of the upper Mekong (Lancang) river in the Peoples’ Republic of China (PRC). Lending additional momentum to the expansion of hydro power are concerns over polluting emissions from coal-powered electricity plants, and high oil and gas prices.

The spate of hydro developments along the Mekong river, and the speed at which they are occurring, will generate both potential positive and negative impacts on biophysical, social and economic aspects.

The potential negative impacts of hydro power development include:

• Resettlement and loss of livelihoods.

• Rapid flow fluctuations in the downstream that can cause soil erosion and safety problems.

• Impacts on infrastructure; and eutrophication and algal blooms.

Two of these impacts have a particular resonance for the Mekong basin: fisheries loss and sediment movement. Both have major potential implications for the macro economy and national security (both food security and loss of large areas of land) of the region.

One fitting example is Cambodia’s inland fishery, one of the world’s largest and most diverse. Because of obstructions from hydro power development, this fishery may lose its ability to migrate along the mainstream, compromising its reproductive success. Fisheries – mostly wild – contribute 12% to Cambodia’s GDP, and 50 species here are migratory. The Mekong River Commission (MRC) has demonstrated that those fisheries would be seriously affected by dams on the mainstream, as nowhere in the tropical world has it been possible to successfully mitigate the impacts of dams on fish movement. Existing fish passage facilities cannot cope with large fish migrations and high species diversity, a specific characteristic of the Mekong river. Captive fisheries, even if it they were increased by reservoir fisheries, could not replace this asset.

More than 70% of total fish catch in the LMB depends on the ability of fish to carry out long distance migrations. A recent consultation by independent experts reported that hydro power installations in the region have a greater impact on the mainstream than on tributaries. Moreover, the further downstream a dam is located on the Mekong river mainstream, the greater its impact on fish migration.

The Upper Mekong river has relatively low fish populations compared to the LMB, and hence dams on this stretch of the river will have comparatively less impact on livelihoods linked to fisheries. However, at a basin-wide level, fishery losses from hydro power development could outweigh electricity gains, with dire repercussions for food security for tens of millions of people.

Not only fisheries stand to be affected by dams. Sediment flow from the Mekong river mainstream sustains the geomorphological stability of the Mekong Delta, where 50% of Vietnam’s staple food crops grow (27% of GDP). Interrupting this beneficial flow would jeopardise Vietnam’s breadbasket.

For hydro power developers, the implications of this study is that specific management measures are needed for hydro development, whereby each river fishery and dam is unique and treated on its own terms. This requires integrating flexibility into dam design at the onset of projects, and taking into consideration the entire basin rather than discrete parts. In practical terms, the prospects for dams on the main stem of the Mekong river are particularly risky. Over the next decade, a more cautious approach would involve focusing on tributaries, leaving some of them free flowing to allow for fish migration and nutrients. It is vital that the free-flow of the Mekong river over its middle and lower sections is safeguarded.

Already, some political leaders in the Mekong area have recognised the need to spare some rivers from dams, invoking the importance of sustaining hydrological services and fisheries. In Vietnam, a Strategic Environmental Assessment of the Quang Nam Province Hydropower Plan for the Vu Gia-Thu Bon river basin was carried out by the International Centre for Environmental Management (ICEM) in 2008. Its recommendations were unequivocal: two complete river sequences, from headwaters to sea, should be kept free from barriers in each of the Vu Gia and Thu Bon rivers to ensure that a full sequence of habitats and migratory routes is protected in each river.

The Quang Nam Provincial People’s Committee (PPC) and the Vietnamese Ministry of Natural Resources and Environment (MoNRE) have endorsed these recommendations, creating a major precedent for how to approach hydro power development sustainably in the context of a river basin.

To get this kind of approach into action, a consultation is needed to draw support from institutions that have an in-depth understanding of the region and of the constraints for hydro development within its confines.

This approach has defined the work of global conservation organisation WWF, which has been working in the Mekong basin for many years. In such an important region where freshwater and terrestrial systems are so intrinsically linked – both biologically and socially – WWF has sought to combine biodiversity conservation with sustainable development, particularly through integrated river basin management (IRBM). Along the way, WWF has developed a strong relationship with the Mekong River Commission (MRC), an international river basin organisation that promotes regional cooperation for the joint management of water resources and development of the economic potential of the river.

In the region, WWF’s activities include:

The themes encapsulated by WWF’s portfolio in the region make for natural linkages not only with the MRC, but also with development agencies such as the Asian Development Bank (ADB). In the context of a three-way partnership, WWF is jointly developing Environmental Considerations for Sustainable Hydropower Development (ECSHD), a project initiated in 2006 to ensure that hydro power development in the Mekong region follows a sustainable trajectory.

ECSHD aims to strike a delicate balance between minimising adverse social and environmental impacts on one hand, and ensuring that the hydro power sector remains a viable, profitable and renewable source of energy supporting the region’s economic development on the other.

The ECSHD project revolves around the development of a decision-support system that incorporates broad-based stakeholder participation, and moves the input of sustainability considerations to earlier stages of energy master planning, water resources planning, and economic development planning. Over time, WWF anticipates that the application of the considerations should complement the current procedures for environmental impact assessment (EIA) at the individual project level and the wider set of planning policies in MRC member countries.

As the momentum for hydro power development grows in the Mekong basin, so are the opportunities for developers to synergise their efforts with institutions such as MRC and WWF. Not only will partnerships of this kind reduce financial risk, they will also help to minimise environmental and social impacts, and ensure that the Mekong basin retains its ecological integrity that is so critical to the wellbeing of its people.

Marc Goichot is the Sustainable Infrastructure Senior Advisor with the WWF Greater Mekong Programme. He is based in Vientiane, Laos PDR, and can be contacted at marc.goichot@wwfgreatermekong.org. www.panda.org/greatermekong