Solving the energy trilemma – the future of UK wind power

With the British Government dragging its feet on the UK’s renewables policies and the future of Hinkley Point C looking uncertain, it seems unlikely that the UK will meet its renewable energy output and climate change targets. In the context of ever increasing energy consumption combined with the need to fulfil commitments to reduce carbon emissions, what place does wind power have in the UK’s energy future? 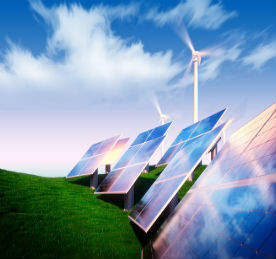 Onshore wind would cost the same as solar and less than HPC or offshore wind.

Decades of inaction have narrowed the gap between UK electricity supply and demand to almost nothing. But this is only one aspect of the country’s well-documented energy ‘trilemma’. In the face of rising energy consumption, the UK must reduce carbon emissions while keeping costs down and assuring security of supply.

One of the few bright spots in the past 15 years has been the rapid growth of wind power, with more than 5GW now installed offshore and almost 9GW onshore. With the nuclear programme in general and Hinkley Point C (HPC) in particular looking uncertain, could wind power fill the gap?

“Onshore and offshore wind are major parts of our generation mix,” says Maf Smith, deputy chief executive at RenewableUK. “We are now seeing coal being regularly beaten by the performance of both wind and solar.”

Renewables have played a major part. With capacity rising by almost a quarter to 30GW, total renewables’ share of electricity generation reached an unprecedented 24.7% in 2015, up by 5.6% over 2014. Total wind generation was up by 26.0%.

“If you look at the Climate Change Committee’s figures, you can see clearly that renewables have made a major contribution to reducing climate change impact,” says Smith. “The decision to phase out coal is a brave one and the right one.”

In June 2016, Parliament adopted a fifth statutory target of a 57% carbon reduction by 2030. However, a huge gulf remains between these aspirations and the action needed to make them reality.

The National Grid reported in July 2016 that the UK is almost certain to miss its legally binding EU 2020 targets for renewable energy output. It also estimates that the UK needs to triple its renewable electricity generation capacity to meet the 2050 climate change targets.

The continued generous support of the oil and gas industry appears contradictory with the UK’s domestic and international decarbonisation commitments.

That looks unlikely. The government elected in 2015 and its Tory-led coalition predecessor have been reversing the pro-wind policies and cutting the budgets that have worked in the wind industry’s favour over the past 15 years. Maintaining austerity and pandering to the Conservative Party’s supporters and financial backers is now taking priority over carbon reduction.

“The continued generous support of the oil and gas industry – and the Oil and Gas Authority’s objective of maximising economic recovery of UK reserves – appears contradictory, if not fundamentally incompatible, with the UK’s domestic and international decarbonisation commitments,” says Will McMyn, head of public affairs at Good Energy. “This support could more beneficially be directed towards aiding the transition to a low-carbon energy system.”

The government itself has acknowledged that it lacks policies to meet the 2050 target. 18GW of new nuclear capacity is the lynchpin of its current decarbonisation strategy, with HPC its 3.2GW spearhead.

But it seems probable that the Theresa May-led administration will cancel HPC, which is now looking like a very high-risk, poor-value white elephant. The £92.50/MWh strike price promised to EDF, the utility that is building HPC with Chinese backing, is more than double the current market rate and, moreover, will rise in line with inflation.

There are also huge cost overruns, severe technical issues and years-long delays at EDF’s other new plants being built using the same technology. Two EDF directors have already resigned rather than support HPC.

So if HPC disappears along with its capacity, equalling 7% of national demand, what are the alternatives? Carbon targets rule out a switch to gas or coal. The obvious low-carbon alternative would be onshore wind, by far the cheapest renewable generation source at about £79/MWh in the first contract-for-difference (CfD) round.

This is about the same cost as solar and lower than HPC or offshore wind (about £114/MWh but falling fast). But in England at least, onshore wind is no longer a viable volume option.

Despite the coalition’s boast to be the “greenest government ever”, the government’s attitude to onshore wind development in England has become steadily more hostile as it sensed the support this policy gained from rural English voters. Anti-wind posturing ramped up in late 2013, after communities secretary Eric Pickles gave himself the power to make all wind-farm planning decisions.

Following a Tory backbench campaign, matters became worse after the May 2015 general election, when the Conservative Party implemented its manifesto pledge to give “local people” a “final say” on windfarm applications. This puts all decision-making in the hands of local planning authorities; all projects must somehow demonstrate that “the planning impacts identified by affected local communities have been fully addressed and therefore the proposal has their backing.”

Any site must also be in an area identified as suitable for wind energy development in a local or neighbourhood plan. “It will probably take a number of years for local plans to be updated in a way that unblocks future development on any significant scale,” says McMyn.

However, onshore is not quite dead yet, with the likes of renewable energy supplier Good Energy working on an ownership model that would see local groups and individuals take a stake of up to 75% in a proposed North Cornwall scheme.

Instead, offshore wind looks like the best way to fill the gap if HPC is cancelled. Offshore’s costs are still higher than nuclear’s but are falling fast, whereas nuclear’s are constantly increasing. The second ‘Cost Reduction Monitoring Framework’ report from the Offshore Wind Programme Board shows that offshore generation remains on track to hit £100/MWh by 2020.

Speaking to The Guardian in August 2016, Henrik Poulsen, chief executive of Dong Energy, said wind turbines, if combined with output from new biomass or gas-fired plants, would reliably meet the country’s future energy commitments without HPC.

“Could you build a national energy policy without nuclear? Yes, you could… and if you needed to fill a [energy capacity] gap offshore, wind could be accelerated to fill such a gap,” he said, claiming offshore wind farms were already producing power at below £85/MWh.

A recent report by the Energy and Climate Intelligence Unit (ECIU) think tank agreed. It reckoned four extra large offshore farms would do the job – and save UK consumers £1 billion a year into the bargain.

Offshore’s support infrastructure and expertise are getting there even faster, with ports like Hull turning into manufacturing and installation hubs. Though not as extensive as hoped, round-three development is going well, with the UK expected to build over 10.0GW in the next decade. By 2030, it will have 37.9GW of wind, 60% of it offshore.

Dong’s Hornsea project one points the way ahead. When it opens in 2020, this will be the world’s biggest offshore farm, with 170 turbines off the coast of Yorkshire producing 1.2GW.

It will employ the latest 7MW wind turbines, each measuring 190m high and built at the new Siemens factory now under construction in Hull. Dong-developed suction bucket foundations for around a third of the turbines will cut fabrication and installation costs.

But what about intermittency? Offshore turbines on their own are, of course, insufficient, but nuclear baseload is not a prerequisite. The ECIU report estimated six to ten gas plants would be needed at a relatively low cost.Says McMyn: “Lots of things combined could easily fill the same gap that HPC would leave – and at a better price: offshore wind, tidal lagoons, energy efficiency, storage and demand side management. We would also like to see a much more ambitious programme of domestic energy efficiency measures and a reintroduction of the Zero Carbon Homes standard for new housing.”

The upshot is that offshore wind could cover HPC’s output with ease. Simply returning to the original plans for round three deployment volumes would do that and more – and massively boost wind’s economic benefit to the UK through greater supply chain investment and job growth.

Rapid-ramp gas turbines, international power interconnectors, greater electrification of heating and transport, energy storage and smart grid technology: all would play their part. But an extension of offshore deployment, or even onshore’s return, looks unlikely under the current administration.

The wind industry still has a lot of work to do to convince politicians, the media and the public alike that it offers the best option for low-carbon, secure electricity generation.