The world’s largest solar generation stations are under development in California using a novel hybrid technology (based around the Stirling engine) and claimed to be twice as efficient as either solar photovoltaic, or any solar thermal technology. David Appleyard 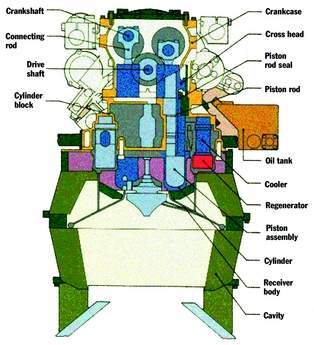 News that the world’s largest solar developments have secured 20-year power purchase agreements pushes a novel form of solar technology firmly into the commercial arena. With a combined electrical capacity of more than 800 MW, the two projects are based on so-called Dish-Stirling technology, developed by Phoenix Arizona-based Stirling Energy Systems (SES).

As with other solar technologies, the potential for such systems is colossal, but in a key difference, the solar Dish-Stirling hybrid claims a sizeable increase in efficiency over parabolic troughs, which use sunlight to heat water and drive steam turbines, and photovoltaic cells. Indeed, the Dish-Stirling system from the company has held the record for efficiency in converting solar energy into grid-quality electricity since 1984 with a conversion factor of more than 29%.

This boost in efficiency consequently improves economic performance. The company says that, based on a utility-sized 1 GW project, the system generates peak power at a cost that is competitive with conventional generation. Reflector systems which concentrate solar energy on a single point have already achieved some success, with parabolic trough systems installed in California for well over a decade where, for example, the Kramer Junction companies operate five 33 MW solar electric generating systems (SEGS) in the Mojave desert. Solar tower-based systems typically focus the energy on a central collector using a working fluid, often water – or molten salts in a two circuit system – which is heated and passed through a steam turbine to generate electricity. This type of central receiver system has been less successful, being limited to a number of prototype systems.

The Dish-Stirling system is composed of a parabolic mirror array some 11 m in diameter and comprising 82 mirror facets attached to a frame by three-point adjusting mounts. To ensure correct alignment, the array may be fabricated in the factory in five sub-assembly units for ease of transport and installation on site. Civil engineering works involve sinking a cement base with an embedded pedestal some 50 cm in diameter to support the dish, with the sub-assemblies bolted together and fixed to the pedestal in about four hours by two workers without the need for a crane. Azimuth and elevation drives allow the array to track the path of the sun through the day and the light is directed to the receiver of a 25 kW Stirling engine mounted at the focus of the array. At night the array is tilted down to leave the engine at ground level.

The Stirling engine, first developed by a Scottish minister in the early part of the 19th century, is unique as the theoretical efficiency is nearly equal to the Carnot Cycle efficiency. Other key advantages are that none of the internal parts become fouled by the combustion process and practically any fuel source can be used. The system also has fewer moving parts than comparable diesel engines and operates relatively quietly, emitting less than 66 dB at full load and typically being used in applications such as domestic heat and power systems or in submarines where noise is a major disadvantage.

The SES Stirling engine incorporates four sealed cylinder assemblies (pistons, piston rods, and connecting rods) along with coolers and heater heads and uses solar energy to heat up the hydrogen working fluid. Regenerators use some of the waste heat from a previous cycle to heat the following cycle, further boosting efficiency.

There is a 90o timing separation between adjacent cylinders and the working gas is exchanged repeatedly back and forth between the same adjacent cylinders. This cycle is repeated as the engine runs at 1800 rpm, generating 480 V at 60 Hz.

SES is a systems integration and project management company that in 1996 acquired the patent, tooling, and equipment rights to the system which had initially been developed in the 1980s by McDonnell Douglas, now Boeing following a merger. Six years of field-testing at a six dish test facility by Southern California Edison and Georgia Power in the 1980s indicated the system out-performed all other solar-to-electric generating systems by a factor of two, yet had comparable start-up costs. Stirling Energy Systems holds two key patents on the solar concentrator system along with all of the intellectual property, including technical and manufacturing aspects of the solar concentrator system. SES subsequently forged an alliance with the US Department of Energy and Sun-Labs (NREL and Sandia National Laboratories) to further test and commercialise the solar Stirling system which now has almost two decades of operational experience.

Since 1998 SES have been under contract with the Department of Energy’s Sandia National Laboratories, initially for a Dish-Engine Critical Components (DECC) programme. Phase I incorporated design enhancements to the Stirling Dish System to increase performance and reduce maintenance costs. In October 2003 on-sun operation started on the SES system at Sandia National Laboratories National Solar Thermal Test Facility (NSTTF) located on the outskirts of Albuquerque in New Mexico. Phase II of the DECC programme, largely aimed at systems integration, has now been completed and using Paneltec mirrors and equipment originally developed by McDonnell Douglas in January 2005, SES and Sandia installed a six-dish 150 kW plant at the NSTTF. The dish system has also been fully integrated with the WGA (now SES) dish control system, including data acquisition from the engine package.

Having optimised the McDonnell Douglas dish to operate with a 25 kW Stirling engine developed in Sweden by United Stirling, Kockums – part of ThyssenKrupp Marine Systems – and Volvo, SES secured a licensing agreement to manufacture, market, and sell the engine as part of the Dish-Stirling unit.

The Kockums 4-95 Stirling engine used, shown right, is about the size of an oil barrel.

With the technology platform in place and SES now in an alliance with Kockums Submarine Systems, the DOE, and several strategic suppliers to further develop the system, SES signed an agreement with California utility Southern California Edison (SCE) to develop a 1 MW commercial test facility. The August agreement marked the first commercial application for the technology and will see 40 Dish-Stirling units erected in the Mojave desert. It is expected to lead to the full roll-out on a utility scale with a 500 MW project planned for initial operation in 2009.

The 20 000 dish array in the Mojave desert northeast of Los Angeles is to sell its output to Edison International subsidiary SCE under a 20-year deal that was approved by the California Public Utilities Commission (PUC) in late October last. SCE also has an option to expand the project to 850 MW. When completed, the 1821 ha station will be the world’s largest solar facility, capable of producing more electricity than all other US solar projects combined. “We are especially pleased about the financial benefits of this agreement for our customers and the state,” said Alan Fohrer, SCE chief executive officer. “The contract requires no state subsidy and provides favourable pricing for ratepayers because tests have shown the SES dish technology can produce electricity at significantly lower costs than other solar technologies.”

A second deal will see a 300 MW array located near San Diego with output contracted to San Diego Gas & Electric (SDG&E) under an initial 20-year agreement. SDG&E has options on two future phases that could add up to 600 MW within a decade and may ultimately surpass the earlier deal to become the world’s largest such project.

The initial 12 000 dish array will be developed by SES Solar Two, an affiliate of SES, on approximately 777 ha of desert and will be located in the Imperial Valley of Southern California. The CPUC approved the Solar Two facility deal in late December.

Outside the US, potential sales are expected to be concentrated in Spain, the Mediterranean region, and Australia, where price incentives and requirements for renewable energy technologies are in place to support such developments. In Spain, for example, incentives provide up to r¢20/kWh for solar energy while in the US Renewable Portfolio Standards (RPS) in California require each utility to increase the amount of renewable energy in its portfolio to 20% by 2017, increasing by a minimum of one per cent per year. According to the CPUC, the Dish-Stirling installations will count toward Edison’s RPS requirements. Nonetheless, other potential markets include Africa where SES is in a joint venture with South Africa’s Eskom, under which it has installed a single dish in Johannesburg.

A star in the making?

Intended for utility-scale applications ranging from 1 MW to 1000 MW or more, the California projects under development by SES represent the first commercial application of the Dish-Stirling system.

However, with more than 26 000 hours of successful solar operation under test conditions and close to two decades of development the technology is well beyond the pre-commercial stage and is set to capture a significant chunk of the solar market where photovoltaic technology is generally not abundant enough or cost-effective enough to meet large scale demands.

Relatively quiet and cheap, the Dish-Stirling system has a number of environmental advantages over other forms of generation. For example the only water used is the 20 l/MWh used for washing the mirrors, much less than conventional thermal generation. Crucially, solar energy is generally abundant during the hottest parts of the day, providing a possible alternative to convential peaking capacity.