Puget Sound Energy is currently carrying out refurbishment of its Snoqualmie Falls hydropower project, which is one of the oldest hydro stations in the US. Here Andy Hunting and Elizabeth Dubreuil take a historical look at what was the world’s first underground hydro plant. 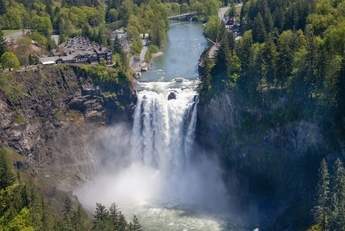 Puget Sound Energy’s Snoqualmie Falls project, located in the foothills of the Cascades Range east of Seattle, Washington, features the world’s first hydropower plant built completely underground. Begun as one man’s vision to harness the energy of one of the Pacific Northwest’s most powerful waterfalls, the 112-year-old Plant 1 facility, together with the 101-year-old Plant 2 powerhouse, is now undergoing a major 3.5-year reconstruction.

When they return to operation in 2013, the two plants at Snoqualmie Falls will generate 54.4MW, providing 22% of Puget Sound Energy’s self-owned hydroelectric capacity. Plant 1, located in a cavern carved from solid bedrock 79.25m beneath the falls, will contribute 13.7MW. It is one of the oldest hydropower plants in the US, and even after more than a century of operation, Plant 1 will continue to generate with much of its original equipment.

The plant was the dream of engineer Charles H Baker, who followed through on his vision of combining new technology and a unique design to furnish clean, inexpensive power to growing Pacific Northwest cities.

An 1886 graduate of Cornell University, Charles Baker had gradually worked his way westward as a civil engineer for the Chicago & Northwestern Railroad, and then for the Seattle, Lake Shore & Eastern. While working along the latter railroad’s route through the western foothills of the Cascades in the early 1890s, Baker often passed by the 82.3m Snoqualmie Falls, which plunged over a precipice only yards from the track.

Baker saw tremendous potential in Snoqualmie Falls for power generation, and further study encouraged him that a power plant at the falls could succeed. Snoqualmie Falls was about 48.28km east of Seattle and 56.33km equidistant from the growing cities of Tacoma and Everett – each with growing industries and streetcar lines that needed reliable power. Baker observed that the Snoqualmie River’s watershed extended well above the snow line to 2.62km, with precipitation in the area at about 2.29m per year. As a result, stream flow at the falls did not dip below 28.32m3/sec during the low water months, and could exceed 283.17m3/sec during flood periods. Baker estimated that the Snoqualmie River would supply 30,000-100,000hp for generation from 82.3m of head, whereas at Niagara Falls’ 50,000hp was then being generated (out of 3M hp available) from 44.2m of head.

Having seen the constant clouds of mist from Snoqualmie Falls soaking exposed surfaces with water year-round and coating them with ice in cold weather, Baker settled on the idea of building a powerhouse underground. He was confident that the hard, nonabsorbent basaltic rock underlying the falls would be well-suited for such a facility. The powerhouse, he planned, would draw water downward through the riverbed above Snoqualmie Falls and emit tailwater from a tunnel at the base of the falls. Backed by family finances, Baker’s new Snoqualmie Falls Power Company began building the one-of-a-kind plant in 1898.

Excavating the shafts and powerhouse

Working within a 4.57m high cofferdam on the south bank of the Snoqualmie River 91.44m above the falls, crews sank a 3mx8.23m vertical shaft through 82.3m of riverbed rock to the elevation of the pool below the falls. A steam-powered air compressor fed a total of ten pneumatic drills at 60psi and drove a pump to remove water from the excavation. A 75hp hoist in a wooden tower lifted rubble from the shaft and raised and lowered men, tools, and building materials. A gravity tramway carted the excavated rock to a crusher, and the crushed stone was stockpiled nearby for use in mixing concrete. The nearby railroad, from which Charles Baker had probably first viewed the falls, greatly simplified the delivery of materials and machinery.

Meanwhile, workers began boring into the cliff at the base of the falls. Supplying compressed air to the drilling crew below the falls was a challenge. Before excavation on the horizontal tunnel could begin, workers had to build a 121.92m air line from the compressor downstream to the edge of the cliff. Next, two-man teams suspended by ropes from the precipice worked steadily in the wind-whipped spray to assemble nearly 91.44 additional metres of pipe up the face of the cliff, along with the necessary timber supports to hold the pipeline in place against the rough rock. From the base of the falls, the horizontal bore extended 198.12m into the cliff to meet the base of the vertical shaft. The horizontal bore was then enlarged into a tunnel 3.66m wide and 6.32m high, sloping toward its mouth with an overall fall of 0.61m.

Beginning at the foot of the vertical shaft and extending over and along the tunnel, a 60.96m long powerhouse chamber 9.14m high and 12.19m wide was carved out of solid bedrock, with a smooth concrete floor at the approximate elevation of high water below the falls. The walls received only a coat of whitewash over the rough stone.

The top of the shaft was widened into an intake bay running 18.29m along the river’s edge. The intake bay was 7.62m high and 6.1m wide, and was divided by a pier into two head bays. Only one of the bays was put into service, the other being available to accommodate up to twice the intake capacity if the plant was later enlarged. (The tailrace was similarly designed to handle twice the plant’s initial capacity.)

The river is normally about 4.57m deep at the intake. To keep the headwater at a suitable depth for power generation during low-water periods, Baker spanned the river with a submerged diversion dam about 60.96m downstream from the intakes. The dam was generally submerged between 0.61m and 3m depending on the river stage, and raised the river’s low water elevation by about 1.83m at the intake.

Within the intake, a pair of large hydraulic lift gates controlled the flow of water into a 2.29m diameter steel penstock. The penstock descended within the vertical shaft (which it shared with an elevator and the main outgoing power conductors) to a depth of 250 feet, at which point it fed a giant horizontal cylindrical receiver within the powerhouse chamber. Four heavy cast-iron elbows then directed water into four smaller receiver cylinders, each of which was connected to a generating unit.

Each generating unit contained six Pelton wheels on a horizontal shaft (in two groups of three wheels separated by a shaft bearing), with each wheel driven by a pair of tangential water jets fixed at right angles to each other. Needle valves in the jets were regulated by Lombard governors, and could also be adjusted manually by handwheels. From the buckets of the Pelton wheels, the spent water dropped into the tailrace through draft openings in the floor slab and then flowed out of the tunnel into the plunge pool below the falls.

Each unit’s shaft drove a 1500kW, three-phase Westinghouse generator that produced 1000volts. A pair of 125volt, 75kW exciters driven by two 100-horsepower Pelton wheels supplied the generators with field current. (An additional wheel powered the permanent elevator that replaced the construction hoist in the vertical shaft.) All together, the four original generating units — 24 individual Pelton wheels — generated up to 100,000 horsepower (6MW) from the 600-ton column of water in the penstock and receiver.

A 10.77m marble switchboard housed controls and meters for the generators, exciters, and main circuits. Power reached the switchboard along wall-mounted aluminum bus bars and then flowed at 1000 volts through aluminum wire cables up the shaft to a transformer house on the river bank. Here 13 Westinghouse transformers rated at 500kW each stepped the voltage up to 32,000 for transmission.

When it began generating commercially in 1899, the Snoqualmie Falls project was the first to use aluminum wire instead of copper for long distance power transmission. Baker noted that because aluminum had only 60% of the conductivity of copper, aluminum wires had to be 66 percent thicker to conduct the same amount of current as copper wires. The thicker aluminum wires, however, were still 50% lighter than their more expensive copper equivalent, making longer spans of wire between poles possible and thus requiring fewer poles and insulators – an additional savings. The larger wires stayed cooler as well, having a larger heat-radiating surface area.

The Snoqualmie Falls project was also a pioneer in long distance alternating current power transmission. George Westinghouse, an early proponent of AC, supplied much of the electrical equipment for the project. While the Snoqualmie Falls Power Co was not the first to adopt AC, its successful efforts to transmit power to remote cities (70.81 line km to Tacoma, 56.33 to Everett, and 49.89 to Seattle) helped demonstrate the suitability of the relatively unproven AC technology and the feasibility of operating hydroelectric power plants far from urban centers.

Plant 1 was upgraded numerous times over the years with higher voltage transformers, more efficient generator windings, and other improvements. By 2008, each Pelton unit’s output had increased to 1.8MW and Plant 1’s overall output to 11.9MW. Overall, all five generating units had served for over a century in a configuration very similar to their original state. Replacement parts, when needed, were custom-built.

Puget Sound Energy is currently in the middle of a 3.5-year programme of upgrades and enhancements to its facilities at Snoqualmie Falls. The combined output of Plants 1 and 2 (both of which remain offline during redevelopment) will increase by 10MW to 54.4MW — enough to power 40,000 households.

• The intake structure is being updated with new materials and trashracks.

• New leads, breakers, exciters, and automated monitoring and controls are being installed on each of the original four generating units.

• The tailrace tunnel is being modified to better protect fish in the river below the falls.

• The diversion dam above the falls is being replaced by a structure 0.61m lower and 11.28m wider. This, combined with changes to the riverbanks near the plant, will better protect the nearby city of Snoqualmie from periodic flooding.

• Unit 5 is being replaced with a new 6.5MW horizontal Francis turbine.

• The plant’s overall output will increase to 13.7MW.