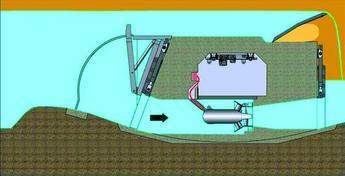 The UK government’s determination to pursue the Kyoto directives for reducing carbon emissions and introducing Renewable Obligation Certificates (ROCs)has given companies increased opportunities to invest in their hydro portfolio as the legislation rewards energy production from renewable sources. The UK government’s renewable target is 10% generation until 2010 and 20% by 2020. Hydro is regarded as renewable if it is new build with no pump storage or refurbished (new runner and guide vanes) and below 20MW.

Since its introduction in 2001 this has boosted the refurbishment market in the UK and particularly Scotland. Many projects have been realised and almost all of the ROC-able stations in the UK have been equipped with at minimum new runners and guide vanes. However, there is still a huge potential for upgrades and refurbishment. Currently the trend in hydro around the world is upgrading and refurbishment, and likewise for the UK market. As most of the UK hydro portfolio has been built between 1900 and 1950, refurbishment has today become a necessity. Additionally, like many other markets, the UK Hydro market is affected by strict competition under the privatised market place, resulting in low electricity prices and therefore financially unviable generation investments.

Scottish and Southern Energy (SSE), the owner of over 60 hydro stations, is one company that has embarked on an overall refurbishment programme to improve the efficiency of its existing hydro power stations.

One of the refurbishment contracts was for the Culligran hydro power station, which was awarded to va-tech Hydro and Weir Engineering Services Alliance in 2003. The scope of work of this turnkey refurbishment project comprises the overall refurbishment of the main turbine generator sets including replacement of turbine runners of Deriaz type, guide vanes, governor oil plants, performance test, generator overhaul and new brush-less exciter machines.

The smaller unit will be equipped with a new runner and a complete new generator set. The electrical control, protection and excitation systems for the entire plant will also be renewed including new digital governors, as well as a replacement of the medium and low voltage switchgear and balance of plant. Finally civil and building works and new main inlet valves shall guarantee high reliability and life extension for at least 30 years. The main site activities started in September 2004 with completion scheduled for the end of 2005.

Another highlight is the oil free runner design, as already installed at Aigas, Kilmorack and other stations in the UK. The runner hub is designed to operate without oil filling and all bearings bushes and guide strips within the turbine runner hub are self-lubricating. The runner blade servomotor and high-pressure oil head (120 bar) are located on the top of generator. This design has been developed to avoid oil spillage into the rivers.

These retrofits and refurbishments not only extends the lifespan of hydro power stations and increases their reliability and availability at a low cost and with minimal environmental impact, but also increases the actual output of the power station.

VA Tech Hydro has been involved in numerous upgrades for SSE over the years, including the Rannoch power plant, which saw a major refurbishment of generators, turbines and inlet valves. The refurbishment has given the 75-year-old Rannoch plant a life
extension of 20 to 30 ears, and an increased output at rated head
of 5%.

In Austria, VA Tech Hydro, together with Porr Technobau and Verbundplan as consortium leader, was awarded a contract to provide a small-scale hydro power plant near the Schemerl Weir at the intake of the Vienna Danube Canal in Nussdorf.

The idea of a hydro power plant in the area was already being considered at the end of the 1990s but was at the time not pursued for economical reasons. However, following an innovative concept worked out by the project partners and the availability of VA Tech’s new Hydromatrix technology, the project has today become economically viable.

The Hydromatrix concept from VA Tech Hydro has also made it possible for the project partners to secure the required flow for navigation in the Danube Canal and to comply with the existing weir operating procedure.

Another major feature of the project is its careful integration into the existing Nussdorf Weir building complex designed by the Jugendstil architect, Otto Wagner. The Hydromatrix plant is scheduled to supply the first electricity in summer 2005 and will meet the needs of approximately 10,000 households.

The Hydromatrix concept is an innovative application of well-proven technologies of hydro power. The Hydromatrix design utilises a factory assembled ‘grid’ or module of small turbine-generator units. A large-scale Hydromatrix power plant is currently being completed in Jebel Aulia in Sudan.

Advantages of the Hydromatrix technology include:

• Use of the existing weir structure, no new civil construction, no geological risk, no additional land usage.

• Modules are removable for flood conditions.

Years of cooperation between VA Tech Hydro and Energie AG Upper Austria have formed the basis for a new application development – the StrafloMatrix. The first StrafloMatrix turbine generator unit was installed at the Agonitz power plant on the Steyr river in 2004. The north Austrian plant, which will supply approximately 4500 households with renewable energy, is equipped with one vertical Kaplan turbine and one StrafloMatrix unit, designed
for a water flow of approximately 10m3/sec and has an output of 700KW. The two turbines have a total output of 3.1MW, which corresponds to an output increase of 350% compared to the plant it will replace.

In addition to its extremely compact design, the ease of operation is another positive aspect of the StrafloMatrix. As the water flow from which the StrafloMatrix generates electricity is constant, it operates without expensive regulation technology. The turbine is lowered into the water flow and immediately generates electricity with the integrated generator.

‘The ability to install the units in already existing structures opens up new opportunities worldwide to economically realise previously unused hydro power potential,’ explains VA Tech Hydro Executive Board Member Dr. Franz Strohmer. Irrigation dams and weir systems throughout the world that are not yet used for energy production are targeted as application sites..