Service Operation Vessels – one year on

It's been a little over one year since Siemens Wind Power launched what it described as the world’s first purpose-built Service Operation Vessels (SOVs) committed to offshore wind farms: Esvagt Froude and her sister-ship, Esvagt Faraday (see MPS, August 2015, pp 30-31). Has the SOV concept, for far-from-shore installations, lived up to the high expectations of its developers? How has one of those SOVs, Froude, performed during its first year of operations at the Baltic II wind farm off the coast of northern Germany? 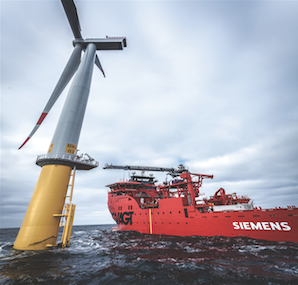 The basic goal of developing an offshore service concept using purpose-built vessels was to help lower the costs associated with servicing far-from-shore wind farms. Part floating hotel, part floating warehouse, the vessels are equipped to spend up to one month at a time in their respective wind farms and include Ampelmann hydraulic “walk-to-work” gangway systems that allow technicians to safely access wind turbines in more extreme weather conditions.

“This year has been all about proving the SOV concept,” says René Wigmans, head of Maritime and Aviation Solutions at Siemens Wind Power, “we had business cases on paper during the planning stage, but now we have successfully delivered on what we said we would. To see the SOV in full utilisation as an efficient machine in the entire service concept, that’s what we wanted as a foundation for the basis of our business, and it has worked. It’s not only a vessel, it’s an entire system: from the warehouse and store keeper to the technicians and site management. We’ve seen how bringing all these elements together has worked.”

The Baltic II wind farm operator, EnBW, agrees. “The concept has fulfilled our expectations”, says Michael Boll, managing director. “There have obviously been a few teething problems, as you’d expect with a new venture like this, but the agreed availability was above expectations. Froude and her sister ship, Faraday, are definitely the best solutions on the market to date.”

The safety record of Froude has been impeccable and a key contributor has been its Ampelmann hydraulic gangway system. The biggest safety issues in offshore turbine service work arise from the use of crew transfer vessels, the conventional means of transferring technicians to and from the wind turbines. The technician has to step off a moving boat onto the ladder of the turbine, so there are many things that can go wrong, including unpredicted deterioration of weather conditions, with increased wave heights, and failures in safety equipment.

In contrast, the Ampelmann system (which employs intelligent hydraulics to keep the gangway in a fixed position relative to the turbine) provides nearly risk-free crew transfer, and can operate in almost any weather conditions in the Baltic Sea, able to cope with much higher wave heights.

In the course of this first year, over 7400 technician transfers have been made via the Ampelmann to and from Froude without incident.

At 32 km out, Baltic II is currently the farthest-from-shore wind farm in the Baltic Sea. Covering an area of approximately 30 km2, it consists of 80 Siemens SWT- 3.6 wind turbines giving a total installed capacity of 288 MW. In this kind of offshore environment, the success of any service concept depends on having safe, quick and easy access to the wind turbines in diverse sea and weather conditions. There are many indicators already from Froude’s performance over the last 12 months that demonstrate the success of the new SOV service concept in this challenging environment, for example service availability. Unlike CTV service operations where technician transfers to the wind turbines can only take place in wave heights of up to 1.5 m, the Ampelmann gangway has extended Froude’s service availability to when wave heights are as high as 2.5 m. As a result, the SOV’s availability in adverse weather conditions compared to that of a CTV has been considerably higher during its first year, resulting in 337 operational days compared with 219.

Another benefit, and “the biggest advantage of the SOV for us”, says Sarah Lindner, operations manager for Siemens Wind Power Services, Baltic II, is that “you have everything in one place…Your service team and technicians are actually based offshore on the vessel so you have no additional travelling hours to and from the wind farm. You have all the spare parts you need in the warehouse below deck. And you have flexible options with the Safe Transfer Boat (STB) and hydraulic gangway for transferring technicians to and from the wind turbines in a range of different weather conditions. This all translates into more flexibility and higher productivity.”

“Travelling to this wind farm from Rostock on a CTV takes three hours each way, so having our technicians based out here on the SOV means they each have up to six more hours during a 12-hour shift to actually work on the turbines,” explains Lindner. “And because we have more productive hours annual service is much quicker and turbine downtimes are reduced. For the customer that means we can compress all annual service work into the summer period and then just focus on troubleshooting during the winter to maximise turbine uptime and take advantage of the higher wind speeds. And when it comes to troubleshooting – we can respond almost immediately because we’re always in the wind farm with the necessary spare parts.”

“Conventional offshore service concepts can easily entail 24 hours of turbine downtime when a component fails,” says Michael Boll. This is not the case with the SOV concept. With 430 m2 of warehouse space immediately below the main cargo deck, Froude carries almost every spare part technicians require to respond quickly to component failures and minimise turbine downtime. The warehouse spans pretty much the entire length of the lower deck and accommodates six standard shipping containers, some of which have been adapted with climate regulating and anti-dust control features to store some of the more sensitive spare parts in optimal conditions. The warehouse is very much at the heart of the ship and central to the SOV concept.

Froude, which employs a Siemens BlueDrive Plus C propulsion system, has also surpassed expectations in terms of fuel efficiency. In an environment where the SOV spends most of its time manoeuvring only short distances from turbine to turbine or holding a fixed position within the wind farm, the innovative diesel–electric DC power and propulsion system, with the speed of generators varying as operating load changes, has really proved its worth, with the ship operating on less than 5m3 fuel per day compared with the projected 6 m3.

For Siemens and customer technicians who service Baltic II, the SOV is both their work hub and home for up to two weeks at a time. So one of the key tests for the SOV concept during the first year in operation was always going to be how comfortable this new experience would be for them. As a result, everything from the design of the ship to the facilities on board were planned to help maximise the comfort of the crew and service teams who live and work there.

The vessel features a specially designed hull with an active roll and pitch damping system that noticeably reduces the effects of rough seas and associated seasickness. In fact, during this first year, the only reported cases of seasickness have been associated with travelling to and from the ship via CTV, not on the vessel itself.

In terms of on-board facilities, the Froude also offers exceptional comfort on a par with many four-star hotels. The ship has 40 private cabins on three floors below deck, each with en-suite facilities, a porthole to let in daylight, a flat-screen TV with on-demand entertainment and all-important wireless internet access.

However, the vessel also features many other social spaces and facilities, including gym and fitness room plus two cinema and games rooms.

“In the beginning, technicians were a little sceptical about staying on the SOV,” recalls René Wigmans, “but now they are more or less volunteering to go offshore due to the quality of facilities. It’s clearly technicians who have best expressed the level of success we’ve had with the SOV concept and their welfare has improved drastically thanks to the SOVs being a home away from home. In the Froude’s first year of operations, the technician retention rate of 100% tells its own story.

“For far-from-shore you need accommodation, you need a warehouse and you need an access system”, says René Wigmans, “and that’s where I see the SOV as the proven solution, everything in one place.”

“The further away an offshore wind farm is, the more important the SOV will become,” agrees Michael Boll, “Personally, I would consider the SOV concept for all future offshore wind projects. In fact, we have already agreed on a follow-up project with Siemens for an SOV at our planned Hohe See wind farm in the German North Sea. The concept for Baltic II convinced us that an SOV was also the right solution for us there.”

Siemens signed chartering agreements with ship owner Bernhard Schulte last year for two new SOVs, due to become operational later this year and next. The naming ceremony for the first, Windea La Cour, was recently held in Hamburg and this vessel will begin servicing the Gemini wind farm in the North Sea off the coast of the Netherlands, while the second, as yet unnamed, vessel is due to service two wind farms within 20 km of each other in the German North Sea: Sandbank and Dan Tysk.

These latest generation SOVs feature a brand new X-STERN hull shape, which has been specially designed to deliver even greater weather resilience, operability and fuel savings during daily wind farm operations. However, it is the addition of a helipad on these two latest vessels that shows how the SOV concept is evolving.

With the added possibility of transferring technicians from a helicopter to turbines via winching operations, the SOV’s service availability can now be extended when it reaches its operational wave height limit of 2.5 m.

Looking to the future we are focusing on the concept of “multi wind farm vessels”, says René Wigmans. “This means the vessels will be designed and built to cater for different wind farms with different tidal and turbine heights, which is quite common in UK waters. To help us achieve this we are looking into gangway systems that can be adjusted in terms of height, opening up the opportunity for SOVs to be shared between different offshore wind farms.

So early experience with Service Operation Vessels has proved positive, and the concept will evolve to include enhanced features and increased flexibility in the coming years.