A 25km storm flood barrier is being constructed to protect the people and cultural treasures of Russia's city of St Petersburg. Essential parts of this project are 40m-wide, 7m-high seals, which are being used to connect tunnel sections underneath the structure 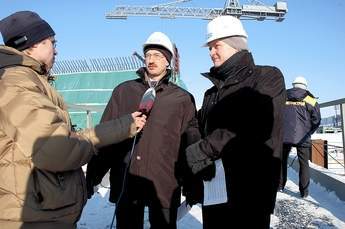 Last january, St. Petersburg was flooded for the 302nd time in its 303-year history. The water level rose more than 2m above normal, flooding some of the streets bordering the waterfront.

St. Petersburg is situated at the point where the Neva river flows into the Gulf of Finland, so when strong winds in the gulf blow eastwards, they act as a barrier against the Neva flowing westwards. As a result, the waters can rise in only a few hours, threatening St. Petersburg’s 4.6M people and its priceless historical sites, such as the world-renowned Hermitage Museum.

In 1979, the Soviets began the construction of a storm flood barrier across the Gulf of Finland, but the project had to be abandoned a few years later for financial reasons as the demise of the Soviet Union began. However in 2003, Russian President Vladimir Putin, a native of St. Petersburg, ordered the project to restart and it is now supported by the European Bank for Reconstruction and Development.

The storm flood barrier consists of a 25km dam, six discharge sluices and two navigation channels. The main channel is 200m wide and will be sealed using two 130m curved doors. These structures will normally rest in curved dry-docks on either side of the channel. When needed, the docks will be flooded and the doors will be floated to closure. As the barrier will be part of the ring road around the city, a tunnel, 17m under the flood gates, has been designed to pass under the main channel.

In the 1980s, all fifteen tunnel sections were constructed without being connected. ‘Our contribution is the design of a sealing system that connects the tunnel sections. We are more or less supplying the missing links,’ says Erwin Brakenhoff, Sales Director at Trelleborg Bakker (a part of Trelleborg Engineered Systems) – manufacturers of the Omega seal..

‘The Omega seals are sufficiently resistant that they will protect the tunnel from water gushing in under high pressure,’ explains Vladimir Vasilijev, Trelleborg Bakker’s area sales manager in Moscow. ‘At the same time, they are flexible enough to allow movement by the tunnel sections.’

It was essential that the 40m-wide, 7m-high seals were made to the highest standards of quality: ‘Once the seals are laid, it is impossible to go in and repair them. These seals are made to provide resistance for the next hundred years,’ says Vasilijev.

This is the first time that Omega seals have been used in a tunnel of the type being constructed in St. Petersburg, which is a ‘cut and cover’ tunnel, whereby a hole is dug, the tunnel is constructed bit by bit, and then covered with sand. What is also unique is that the tunnel will be provided with a double sealing system, an outer Omega seal and an inner one, as a back-up.

The construction of the standard Omega seal consists of 2 nylon piles with SBR rubber cover on the inside and outside. The allowed movement of the Omega – named because the seals are the shape of the Greek letter – depends on the pressure differential across the seal and the strength of the piles. In general the deformations the Omega is designed to accommodate are caused by axial and vertical movements and rotation of the two bridged structures. Gap closure, an axial movement, will compress the arc of the Omega. An increase in the gap is limited by the circumference of the Omega’s arc.

Based on the literature, the expected lifetime of the seal is at least 100 years. They can also withstand temperatures ranging from -30°C to +70°C.

Trelleborg Bakker is able to calculate from the force-compression curves and elongation limits at various water pressures that the Omega seal satisfies the following conditions with agreed safety limits:

* The seals can withstand high water pressure in combination with relatively large displacements in all three directions.

* The steel clamping construction is capable of keeping the Omega flange in position and sealing against the water pressure while at the same time allowing for all gap movements.

* The clamping and sealing function of the clamping construction should incorporate the relaxation effect of the rubber flange over the expected tunnel lifetime period.

The seals being used in St Petersburg were manufactured in the Netherlands, at Trelleborg Bakker’s factory in Ridderkerk, outside Rotterdam.

Construction of the St. Petersburg dam is scheduled to finish in 2008. So January’s flood may hopefully turn out to be the last in St. Petersburg’s history.

As the storm flood barrier will be part of the ring road around the city, a tunnel has been designed to pass under the main channel tunnel Some 145 million people were able to watch Vladimir Vasilijev, area sales manager, and Peter Stello, the managing director of Trelleborg Bakker, as they were interviewed by the national television company about the company’s work on the project Representatives Author Info: