A sorbent commonly used in the filtration of drinking water is emerging as a potential solution for removing soluble transition metals, such as Co-60, from liquid radwaste. By Fred Tepper and Leonid Kaledin 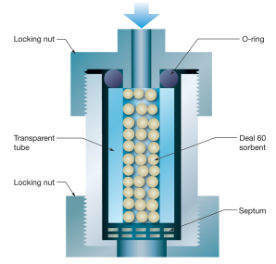 Several of the metal ions found in radwaste, such as caesium and strontium can be adsorbed by ion exchange resins. However removing or concentrating soluble transition metals such as manganese-54, cobalt-58 and cobalt-60 or their colloidal oxides and hydroxides is very difficult.

DEAL® is a sorbent that has been developed at Argonide Corporation (Sanford, Florida). It is diatomaceous earth (DE) that is coated with an amorphous form of aluminium hydroxide. DE is a natural mineral, composed mainly of silica, which easily crumbles into a fine powder. One of its important uses is in the filtration of drinking water, where it serves as a filter aid. DE particles are deposited on a filter septum (screen) to form a precoat. Contaminant particles that are too large to pass through the thinly-packed bed are retained by size exclusion. DE filtration alone is suitable for removing cysts (~ 5 microns) but inadequate to remove smaller contaminants such as bacteria, virus or colloidal solids (< 0.1 microns). Moreover, colloidal particles with an electronegative charge on their outer layer are rejected by DE because its surface charge is also electronegative.

Calculations show that the surface charge is large enough to cause a particle as far away as 10 microns to be attracted to and then adsorbed by the DEAL material. (This process is called electrostatic adsorption, a mechanism that is known in the filtration industry.) The result is that with a 3 mm-thick precoat layer, consisting of 60-micron DEAL particles, electronegative particles have an extremely low chance of manoeuvring through the tortuous path of the packed bed without being attracted to and retained by DEAL. This effect can be seen in a video where a particulate dye only 6 manometers in size is removed by a 3 mm-thick bed of DEAL.

DEAL is very efficient in removing small particles. It is highly efficient in filtering proteins and DNA, most of which are in the 0.5 to 1 nanometer size range. DEAL maintains its electropositive characteristics over pH range from 4 to 9.5, and in low conductivity water as well as in saturated saline water.

How the process works

Cobalt(II) hydroxide is precipitated when an alkaline hydroxide is added to an aqueous solution of Co2+ ions:

In addition to neutralisation, the stream can be oxidized with a low concentration of an oxidant. We proved that very low (stoichiometric) additions of sodium hypochlorite (NaOCl) will also precipitate a cobalt oxide (Co2O3). We believe the reaction is:

Virtually all particles in the pH range of 5 to 10 are electronegative, so they are attracted to DEAL, which has high electropositive charge, and adsorbed.

Experiments were done with natural Co-59 to simulate Co-60. Figure 2c (lower left) shows the bottom half of an opened 25 mm filter holder holding a 3 mm-thick layer of DEAL. The dark precipitate was formed by neutralising a solution of 100 ppm cobalt ion (from cobalt chloride) and then oxidizing the solution with dilute (~ 0.02%) sodium hypochlorite. Figure 2d (lower right) shows a similar DEAL filter that was used as a polisher downstream of the filter in Figure 2c. The blackened layer of cobalt oxides or hydroxides on the surface of filter 2c was absent on that of 2d. By measuring the weight of DEAL in filter 2c, a retention capacity of 100 mg of cobalt/gram of DEAL was calculated. Even at high concentrations of cobalt, this qualitative experiment showed high levels of cobalt removal. The process is applicable to radioactive transition metals including lanthanides or actinide elements. While making the stream alkaline would convert most of the soluble metals to insoluble oxides or hydroxides, dilute solutions of chemical oxidants would further drive the reaction. The pH should be no greater than about 9.5, at which point DEAL loses its high positive surface charge.

The first test of DEAL with radioisotopes was done at the Brunswick Nuclear Plant in North Carolina. The test was performed on off-standard water that could not be reprocessed by plant systems and needed to meet specific guidelines for discharge.

Analysis noted that there were traces of caesium and cobalt in the water (see Table 1).

In a multiple-test series, several ion exchange (IX) resins along with DEAL were tested in order to evaluate methods for cleaning the water. The DEAL experiment involved adding sodium hydroxide solution to bring the pH from 3.1 to 7.8, thereby favouring the conversion of soluble radioactive metals to form colloidal oxides and hydroxides. The neutralised solution was passed through a column containing 50 mL of packed DEAL 60 (coated 60 micron DE). The glass column was approximately 300 mm tall and 15 mm in diameter. The flow rate was approximately 10 mL/min and the detection time duration was 15 minutes.

During the course of the tube test it was noted that a greenish-colour band, approximately 4 mm wide, formed on the column at the surface of the influent (note- cobalt oxides and hydroxides are generally coloured green or greenish-blue) and this colour advanced through the first 40 mm of the column as the test proceeded, suggesting that the colloidal radioisotopes were concentrated in that 40 mm of sorbent.

Note that caesium radionuclides were adsorbed to around 60%. We don’t yet have a hypothesis of why this occurred. Nevertheless, using DEAL upstream of an IX resin bed should improve on IX’s efficiency for caesium extraction.

Radioactive elements produced in a nuclear reactor are typically treated with ion exchange resins. The resins are formed as a precoat on filter septa located on either a side-stream or process-stream loop. Whether due to either differential pressure losses (?P) or the sorbent bed is near exhaustion, it is backwashed and the sludge is disposed of as radioactive hazardous waste. Resins are capable of removing radioactive caesium and strontium-90 but IX resins have a low efficiency for removing many soluble transition metals and even lower efficiency for colloidal solids.

Similarly, a precoat of DEAL is formed on the septa. While any particle size of DEAL may be used, the coarser size DEAL-60 is preferred because of its lower pressure drop compared to smaller DEAL particles. Due to its unconventional chemistry compared to standard IX resins, DEAL-60 has been shown to be very effective for the removal and retention of colloidal (< 0.1 micron) material. The sorbent layers are then backwashed and the sludge dried and vitrified or disposed of as hazardous radioactive waste.

A series bed of DEAL could allow separation of high-level from low-level wastes. Also, DEAL and IX resin beds could be used in series to handle a wide spectrum of radionuclide wastes.

Alternatively, dried DEAL sludge from filtering high- or moderate-level liquid waste could be packaged in sealed stainless steel tubes for use as a gamma source, replacing cobalt-60 sources. Cobalt-60 sources are used for sterilising single-use surgical and medical supplies, laboratory equipment, packaging materials, pharmaceutical products, cosmetics raw materials, spices, fruit, seafood, poultry and red meat. It is used in medicine (‘Gamma Knife’) in noninvasive ablation of brain tissue for treatment of brain tumours. There is considerable cost in manufacturing Co-60 for these purposes, because it involves radiation of Co-59 with a slow neutron source, generally for as long as two years. Although the DEAL would adsorb other radionuclides in addition to Co-60 it would not be necessary to separate them, as any alpha or beta radiation would be stopped by the double metal walls that would encapsulate the dried sludge.

While DEAL is manufactured in tonnage quantities for the purpose of purifying drinking water, additional focus will be on the development of more data and to optimise DEAL for the nuclear industry. Laboratory tests are currently scheduled at several nuclear stations in the US.

At the same time the company will continue to develop filtration data using non-radioactive isotopes for cobalt, technetium and uranium. Recent tests show that DEAL, produced for drinking water treatment, elutes traces of sodium sulphate and other ionic contaminants (but not measurable aluminium). Plans are underway to wash these contaminants out using deionised water, so that DEAL could meet the standards necessary for use in an in-process reactor loop.

In addition to concentrating cobalt, DEAL can be used in concentration of fuel materials and perhaps some degree of separation from other metal contaminants.

DEAL can be used as a polisher in a purification system for pump-and-treat operations on contaminated soil. This presumes that there is a gross particle filter upstream of the DEAL to avoid overloading it.