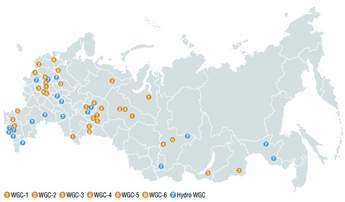 The announcement follows UES’s forecast that by 2010, without further investment, there will be a national capacity deficit of approximately 21 GW owing to the growing electricity and heat demand from industrial and household sectors and estimates that an additional 40.9 GW of capacity will need to be constructed and brought online. In response to this forecast, plans for the construction of an additional 34.2 GMW have been outlined. The company states that the “[new construction] will be financed with… [its] own funds, proceeds from… share offerings, project finance arrangements, and direct private investment… [in addition to] funds raised from private investors under the investment guarantee mechanism.”

Of the total investment, RUB 1.8 trillion will be used for the development of new power projects, with RUB 1.3 trillion earmarked for grid infrastructure development. The investment programme envisages the construction of combined-cycle power plants requiring over 100 gas turbines, 67 steam turbines, and 125 waste heat recovery boilers. Over 70 steam turbines will be needed for the construction of large coal-fired power units employing circulating fluidised bed technology and ultra-supercritical boilers. In addition the plan will require 260 turbine generators with a total capacity of 45 000 MW, 48 boiler plants with 45 t/h steam generating capacity and some 150 transformers with a combined rating of

During the period until 2011, the construction of this new capacity will require spending to the tune of RUB 630bn ($24bn) on the procurement of generators and turbines, with the procurement of high voltage equipment for bulk transmission grids expected at about RUB 200bn ($7.6bn). All the equipment deliveries, in addition to construction, installation and commissioning contracts are to be procured on a competitive basis to ensure maximum transparency.

A climate of reform

The proposed and ongoing investment in new capacity comes against the backdrop of UES’s restructuring schedule which began in 2003. UES’s reform agenda is known as the 5+5 plan – the name refers to the plan’s 5 years of preparation and proposed 5 year implementation.

The reform is seen as a much needed response to failed attempts to improve the country’s energy supply reliability and increase investment in the power system, which had continued to be problematic and after the economic downturn of the 1990s had more or less ground to a halt, in terms both of capacity development and technological progress.

The aim of the 5-year plan was to split UES’s structure – which consisted of 72 AO-energos, vertically integrated subsidiaries with monopolies over regional generation and distribution and 32 ‘federal’ generation assets – into a state controlled organisation owning and managing what are seen as the natural monopoly functions of distribution and dispatching, and privately owned generating and service companies able to compete and trade in a new wholesale market place. The latter would include supply, repair works and services but exclude nuclear and hydro generation.

When completed, the divestment of most of UES’s assets will result in the formation of separate generation, distribution and transmission units with the state retaining control of the grid through the federal grid company (FGC), in which it will hold a 75-80% stake. The generation assets are to be consolidated into two types of inter-regional companies: wholesale generation companies (WGCs, aka OGKs, operating existing ‘federal’ power plants plus 8 under construction) and ‘territorial’, or regional, power and heat companies (TGCs, aka TGKs) of which there will be 7 and 14 respectively. Of the 7 WGCs, six comprise thermal power plants, generally but not exclusively the largest plants, while one – HydroWGC – consists of hydroelectric plants. The federation’s ten nuclear plants remain in state ownership under RosEnergoAtom’s control. The six thermal WGCs will become fully privatised, with the government’s stake in each no more than 49%, while its stake in the TGCs will be around 15-25%. However, the government will retain majority ownership of HydroWGC, “for strategic and safety reasons”, as well in the newly formed interregional distribution companies (IDCs) serving the central, northwestern, Ural and Volga, and Siberian regions. By the start of this year, the restructuring of 70 of the AO-energos into WGCs and TGCs had been completed and many of them had well-advanced prospectuses.

Originally, the divestment reform was to be carried out over a 3-year period, but lengthy debate in the state Duma regarding concerns about the sale of state owned assets held up the passage of legislation permitting reform, which is to take place in two stages. The first, which began in late 2006 and is planned for completion later this year, aims at the creation of two pilot independent generation companies through the spin off of WGC-5 and TGC-5 via two transitional wholesale companies to which UES’s shareholdings, 50% and 65% respectively, will be transferred. The process will result in UES shareholders automatically becoming shareholders of the two companies, although the government’s shareholding will be at least 25%-1, giving it blocking powers. In November it was reported that the sale of a 14% stake in WGC-5 raised RUB 12bn ($459m) from investors, which included Gazprombank and EBRD. UES also hopes to attract foreign investors, with Enel suggested as one candidate.

WGC-5 and TGC-5 were chosen because they were considered “ready for fully-fledged stand-alone functioning and implementation of long term investment projects”. This pilot privatisation will allow an assessment to be carried out of the two private generation companies’ abilities to independently attract investment and participate in the wholesale market.

The second stage of the reform, tentatively planned to begin at the end of this year and be completed in mid 2008, will consist of complete unbundling of all the other UES assets into the FGC, four IDCs, the system operator, and the remaining six WGCs and thirteen TGCs. The WGCs will become the largest wholesale market participants, and will be established with approximately equal starting conditions (ie comparable installed capacity and asset values) and be located in different regions, in an attempt to ensure that no one WGC is able to monopolise the market. And no single operator will be allowed to control more than 35 % of generating capacity in any one of the country’s price zones, also to prevent monopolies. Should a local monopoly arise, it can be placed under price regulation for six months or broken up.

UES assets will not be sold for cash, rather shareholders will be able to exchange their shares on a pro rata basis for direct stakes in the new national generating companies. Because the government, which owns 52% of UES, will not exercise its pro rata rights, the remaining stakes in the new GCs will be auctioned off, with UES shares being the only legal tender.

The status of the investment programme is being updated regularly in a series of progress reports. That of March this year listed the commissioning of a new cogeneration steam turbine of 115 MW at the Yaroslavskaya CHPP-2 of TGC-2, increasing the plant’s capacity to 325 MWe from 210 MWe. The 24 MW hydropower unit 11 of HydroWGC was put back in operation after a complete overhaul at the Kamskaya HPP. Progress was also seen in the construction of substations: the Vstrecha substation in Aprelevka in the Moscow region was brought on line, now equipped with two 250 MW transformers with an excess capacity of 120 MW, while in the Syktyvdinsky district in the Komi Republic construction of the 110/10 kV Vylgort substation got under way. Other developments included completion of the first phase of construction of the 220 kV Uryevskaya line to the 550 kV Trachukovskaya substation, to improve the supply to the Uryevsko-Pokachevsky district in Khanty-Mansiysk, and the commencement of construction of two transmission lines, the 95 km 220 kW line to the combined-cycle units under construction at Ivanovskaya TPP, and the 355 km 550 kV 1000 MW transmission line Balakovskaya NPP to the energy system of the Southern Federal Okrug.

The bulletins for April and May 2007 were able to report that work had started on installing a 50 MW turbine at the Tomskaya TPP-2 (TGC-11) and that Mosenergo had started construction of the 420 MW unit 8 at its CHPP-26. In April, the FGC started construction of a 500 kV GIS at Kashirskaya TPP, and in the same month brought on line a 500/110 kV transformer at Zlatoust 500 kV substation, Chelyabinsk. In May a contract was signed for the refurbishment of Vuoksinskiye HEPP Cascade-1, while Mosenergo signed contracts with GE for the supply of six LM6000-PD Sprint turbines for Tereshkovo and Kozjuhovo CHPP s, Moscow.

One significant investment programme, announced shortly after the forecast for demand was published, is that for TGC-8. The GC aims to increase the power supply and network throughput capacity in the Krasnodar Krai – the federal subject (krai) located in the southern federal district on the Black Sea and Azovskoye Sea coasts – an area in which electric power consumption grew by 6.3% in 2006.

The modernisation project, for which the investment level is expected to reach RUB 34.7 bn by 2010, includes increasing the capacity of the 78 MW Sochinskaya TPP, built in 2004, construction of a new 200 MW combined-cycle plant, Adlerskaya CHPP, and a chain of new hydroelectric plants with a total capacity of 150 MW on the Mzymta river.

A RUB 11.4bn investment in the 450 MW Krasnodar CHPP is also planned, which would see a 45% increase in capacity to 939 MW, as well as the installation of a CCGT. There is also to be a RUB 2.5 bn reconstruction of the Astrakhan CHPP, involving the replacement of the obsolete steam turbines with modern units. This is estimated to reduce the plant’s fuel consumption by 30%, and bring capacity to 120 MW.

A key focus of investment in the Krasnodar Krai grid is on the measures outlined in the federal document for the development of the southern city of Sochi as a mountain resort. Sochi is one of a number of candidate cities competing to host the 2014 winter Olympic games. The development programme includes the construction of a 220 kV line Psou-Poselkovaya terminating at the new Poselkovaya substation, and a number of 110 kV transformer substations, measures aimed at ensuring a reliable power supply in the Krasnaya Polyana recreation zone.

In addition, there are plans to construct a 50 kV substation at Chernomorskaya and connect it to the 500 kV line to the Tsentralnaya substation. It is hoped that the construction of a cable and overhead transmission line connecting the Tsentralnaya, Gorny Klyuc, Lzhubga, and Psou substations, and bypassing the mountains, will help reduce the system’s vulnerability to natural disasters.

On site at Mosernergo’s CHPP-26 project, a gas and gas/oil plant being built in three stages totalling 600 MW Assets of the 7 wholesale generating companies Russia’s power structure before reform