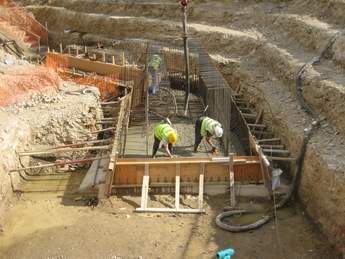 Construction is underway on a scheme to provide the UK’s second largest airport with greater flood protection. Work on the multi-million pound Upper Mole Flood Alleviation Scheme started in May 2010 thanks to £11M (US$17M) of funding from the Environment Agency, a £4M (US$6M) contribution from Gatwick Airport and £100,000 (US$158,000) from Crawley Borough Council. The work is scheduled for completion by 2013.

The upper reaches of the River Mole are at risk of flooding, and more than 1300 homes and businesses across the nearby towns of Crawley and Horley are set to benefit from the project. Properties in the towns have previously suffered from the devastating effects of flooding, including serious incidents in 1968 and 2000 and smaller floods in other years. The areas of Furnace Green and Three Bridges are particularly at risk. In addition Gatwick Airport, which is the busiest single runway airport in the world, is vulnerable to flooding from three watercourses. A major flood could cause the whole airport to close for a period of weeks whilst specialist equipment is replaced; causing major disruption to the whole region.

Ian Tomes, Area Flood Risk Manager for the Environment Agency, said: “This is an exciting project and one that will potentially benefit hundreds of residents in the area. It also has the added bonus of helping to safeguard the operation of Gatwick Airport. As has already been seen, flooding is very destructive and so it is vital we do everything we can to reduce the impacts where and when we can.”

Stewart Wingate, Chief Executive of Gatwick Airport, said: “We are delighted to be part of the Environment Agency’s scheme to bolster the flood protection for the airport and surrounding areas. In 2000 the A23 road under the airport’s south terminal was closed because of torrential rain, and this scheme will dramatically reduce the risk of this happening again.”

The first phase of the scheme will raise the level of the existing dam at Tilgate Lake in Crawley. The crest of the dam will be raised (with no change to normal water level) and an orifice plate added to attenuate outflows from the existing spillway, thus providing flood storage.

Improvements to Tilgate Dam include raising the existing earth embankment dam to provide flood protection for a 1 in 1000-year event. Key parameters, for both the existing and proposed dam, are provided in Table 1

In order to provide added confidence in the temporary stability of the downstream face of the existing embankment it was determined that the reservoir should be lowered by not less than 2m during the construction period. Such a lowering could retain the existing factor of safety against uplift at the downstream toe of the dam.

The design assumes that fill procured from within Tilgate Park will be used as general fill for the majority of the embankment. The ground investigation has indicated that the geology at the site is interbedded mudstones, siltstones and fine sandstones which tend to weather to silty clay and sandy silty clay with some gravel. These materials are considered suitable for general fill and investigation into their use as core material has been implemented as part of a value engineering exercise.

The spillway to discharge extreme floods is an overtoppable embankment spillway with grasscrete armour layer situated on the right abutment and thence into the fisherman’s car park. The spillway should operate, in theory, only once every 1000 years and has been designed to safely discharge the probable maximum flood.

A stilling basin has been provided to destroy the energy of high velocity flow over the spillway to minimise the risk of damage for floods in excess of 1 in 1000 years. This is a shallow depression at the toe of the spillway, with a pipe to drain rainwater laterally into the middle of the valley.

The control structure to attenuate flood flows whilst retaining the existing normal reservoir level will be in the area of the existing structures on the right abutment, with control provided by an orifice plate with an open area of 0.10m2. A right abutment outlet will be provided to replace the existing 0.6m diameter outlet on a like for like basis in its existing alignment. This allows the reservoir to be lowered by about 1m in a day, for the top 1.5m

The results of the 2006 and 2009 ground investigations show that the embankment comprises soft sandy silty clay overlying alluvium and terrace deposits which in turn overlie Upper Tunbridge Wells Sands (UTWS). The UTWS comprises interbedded mudstones and siltstones with occasional sandstone beds. Excavatability of UTWS, both in terms of potential borrow area, and foundations for outlet structures on right abutment could be a key issue.

Construction work at Tilgate dam started on site in May 2010 and has a programmed completion for the end of May 2011. The principal contractor for the works is Morrison Construction Ltd.

There are three other flood storage areas and a river restoration site, which together with the works at Tilgate Lake, make up the Upper Mole Flood Alleviation Scheme. Two of the flood storage areas, Worth Farm and Ifield, are greenfield sites on the Gatwick Stream and River Mole, respectively. The third site, Clay’s Lake, near Pease Pottage, is on a tributary of the Gatwick Stream and like Tilgate Lake, is an existing lake and involves raising the existing embankment dam. Construction at these sites is currently expected to begin in March 2012 and be completed by September 2013. The flood storage capacity at each location is shown in table 2.

The capacity of each of the flood storage sites has been optimised based on current guidance for climate change impacts given by the Department of Environment, Food and Rural Affairs (Defra). As a consequence, a precautionary approach has been adopted in the designs for Tilgate Lake, Clays Lake and Ifield and an adaptive approach for Worth Farm. The designer for the flood storage sites is Jacobs.

Inevitably in a large scale project such as this one there will be some loss of woodland and vegetation. To offset this loss, new trees will be replanted and new wildlife habitats will also be created. The Environment Agency is taking the opportunity of carrying out these major works to implement over five hectares of Biodiversity Action Plan habitat, including the regeneration of wet woodlands which are extremely rich in invertebrate life and support a very large number of native species.