Hydropol has been working on a rehabilitate-operate-transfer (ROT) project which covers seven hydropower plants in Macedonia. Tomáš Cerný gives an insight into the work which has been undertaken 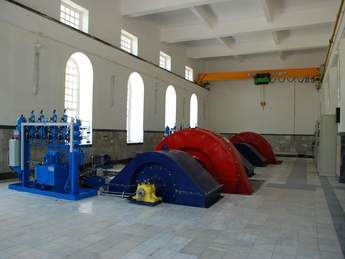 Most of the power plants in the ROT scheme were built in the first half of the 20th century. The only exception is the HPP Kalimanci which was commissioned in 1970 together with the Kalimanci earthfill dam. The majority of the plants were operated without any major modernisation or general refurbishment since commissioning.

Major repairs were performed only at Pena hydro plant (built in 1926) due to severe flooding in 1984. This repair included tunnelling of a new derivation channel, outer penstock replacement, and replacement of a major part of the electromechanical equipment.

After years of operation without major repairs, most of the electro-mechanical equipment was far behind its exploitation period. State of repair included heavily damaged turbine parts due to erosion, cavitation and fatigue, heavy leaking of valves, significant oil leaks throughout the equipment, low generator winding insulation resistance etc.

The state of the power plants before the refurbishment can be illustrated by a few examples. Some of the equipment was not capable of proper operation and of performing their safety functions – none of the overflow detectors were functioning, most of the penstock valves were not capable of automatic or remote closing. Even simple automation was not installed on most of the power plants, eg the level control of the units was based on a water chamber level reading and communication over the radio between personnel. Before Hydropol oversaw the rehabilitation of the plants, Zrnovci‘s average production of 5.2MkWh barely covered operational costs involving 20 employees.

Scope of the works

Generally, before refurbishment the power plants suffered from low efficiency, large maintenance requirements and an enormous number of employees were involved in the operation. Therefore, general refurbishment and modernisation of the power plants became inevitable. The key goals of the ROT project were as follows:

• Full automation of the operation.

• Remote control and monitoring of the operation.

The scope of works for the seven power plants was very wide. It started with construction of the new HPP Matka (next to the original HPP Matka) using the existing dam and modified water inlet tunnel; through to rehabilitation of Pena and Pesocani accompanied with medium scale civil works connected with the complete replacement of the units or turbines; ending with the reconstruction of Kalimanci, Sapuncica, Dosnica and Zrnovci, representing a typical technological refurbishment with a small amount of civil works of auxiliary character.

• New or general overhaul of the generator, including new magnetic circuit and electric circuit of the stator, rewinding of the rotor, repair of mechanical parts, and new instrumentation, including unit speed metering sensors.

• New lubrication and oil cooling system with focus on the minimisation of water pollution risk by oil.

• Piping works – new assembly joints and adjustment of the pipeline and penstock parts for the new equipment, installation of valves.

• New MV cabling and installation of the MV equipment.

• Ultrasonic flow measurement in the penstock.

• New diesel gen-set for backup power supply and black start of the units.

Hydropol played the role of a turnkey supplier of the works, keeping the key features of each particular project in-house – the organisation and scheduling, basic design and tendering, in-production supervision, site management, and commissioning. Financing of the whole project was also secured by Hydropol.

Organisation of the works

As Hydropol also ensures the operation of the power plants, the key feature of the works on each site was the time schedule. This was selected to fit the needs of the complex rehabilitation and at the same time to minimise generation losses. Therefore, it was adjusted to each power plant‘s standard operation performance. For all the sites, the refurbishment was accompanied by shut-down of the power station. This was usually scheduled for summer and fall. However, Kalimanci was overhauled during the fall and spring period when there are no irrigation requirements and water is accumulated in the dam.

The rehabilitation of HPP Dosnica was performed in the period of a peak demand for raw materials and semi products with almost double standard delivery times compared with the time of the original scheduling. As most parts were replaced completely or new main turbine parts (runners, shafts, guide vanes/nozzles) were installed, the only really lengthy repair was the overhaul of the generators. Therefore, the schedule was modified to this situation and two generators were disassembled in the fall of 2007, rehabilitated, and assembled back with the present turbines to catch the 2008 spring water. When the water flow dropped in the beginning of summer, the third generator and turbine were disassembled and sent for overhauling. This schedule adjustment helped the economy of this particular rehabilitation as production losses were minimised.

For the shutdown during rehabilitation, the needs of the connected water consumer had to be considered. At Dosnica, the supply of fresh cold water to the nearby fish farm through the buried diversion channel could not be interrupted, even for one single day in the hot Balkan summer. Therefore, overnight disassembly of the turbine inlet pipeline had to be performed. A diversion pipeline from the penstock directly to the tailrace was installed.

Local irrigation in Zrnovci village had to be maintained during the shut-down. Based on an agreement with local farmers, a mobile pump was installed into the river bed and water was pumped back to the tailrace channel.

In the preparatory phase of the rehabilitation, detailed performance measurements were performed in order to assess the technical condition of the equipment and establish real design parameters for the refurbishment. From these measurements, unit efficiency measurements prior to refurbishment can be pointed out. This measurement not only gives efficiency data for future comparison, but also important information about the whole pressure water system and gives the necessary background data for design parameters of the new equipment.

HPP Sapuncica is a good example of such measurements. Its operational performance indicated significant pressure losses in the penstock. Among production losses due to lower head, decrease of the turbine hydraulic efficiency could be expected as the turbines worked out of the design head range. After thorough investigation, enormous incrustation inside the steel penstock was discovered.

This goethite blister-like incrustation of peak ca 20mm in height was caused by the reaction of the steel pipe with highly oxygen-saturated water. The incrustation was removed by a loosely inserted abrasive cleaning tool being pushed down the penstock by water. After the cleaning, a 2% increase in turbine efficiency was measured as well as a penstock loss decrease of about 33%.

As described above, the so-called core works on the project have been finished successfully and all the power plants are operating smoothly in fully automatic mode as expected.

Throughout the remaining period of the ROT project, auxiliary works must be completed. These include the bottom outlet gate exchange at the Matka dam which will allow automatic releasing of the biological minimum during emergency shutdown of the units. The corrosion protection of steel penstocks will also be completely renewed or repaired on all power plants, all intakes will be automated, and small civil repairs of the structures will be finished.