Fish passage and screening methods had been a concern at Savage Rapids dam in the US since construction. The final outcome for the 88-year-old structure proved to be dam removal. Richard D Benik, Robert Hamilton and John Redding from the US Bureau of Reclamation give more details 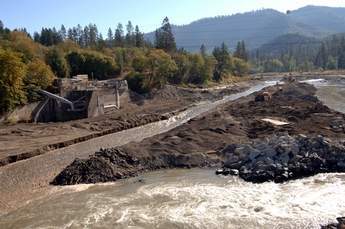 Savage Rapids diversion dam is located on the Rogue river about 8km upstream from Grants Pass, Oregon, in the US. The purpose of the dam was to seasonally raise the surface of the Rogue River by an additional 3.4m through the use of stoplogs on the crest of the dam. This would provide a sufficient reservoir head to efficiently operate a gravity canal headworks and a hydraulically-powered pumping plant. Although the 88-year-old dam was over 172km from the Pacific Ocean, it blocked a major migration route for several species of salmon – that is until October 2009.

The dam was originally constructed in 1921-2 by private developers to divert river flows to irrigate up to approximately 73km2 of land. For economic reasons, only about 51km2 was irrigated, with that number declining to about 31km2 today.

The dam was owned, operated and maintained by the Grants Pass Irrigation District (GPID) and was their primary irrigation diversion facility. In 1949, GPID sought Federal assistance to rehabilitate the dam crest gates and install fish screens. Congress subsequently directed the Bureau of Reclamation (USBR) to address these issues at the dam.

The structure was a combination reinforced concrete gravity and multiple-arch diversion facility. It had an overall length of 142m and consisted of the north fish ladder and pumping plant on the right abutment; an overflow portion or spillway across the river channel; and the headworks to the gravity canal and south fish ladder on the left abutment. The pumping plant used hydraulically-driven pumps to supply water to canals on the right and left sides of the river by way of a 1m diameter pipe through the dam. The dam had a structural height of 10m from its foundation to the concrete crest of the overflow portion.

USBR rehabilitated the dam in 1953-4 by installing metal stoplogs to replace the original crest gates across the overflow portion of the dam. The original dam did not include an outlet works. During the rehab, two of the bays on the left side were completely removed, the foundation was excavated, and the bays were rebuilt to house two 5m wide by 2m high top-seal radial gates that served as the river outlet works. A diversion channel upstream and downstream of the new radial gates also was excavated. These gates were used to lower the reservoir for installation and removal of the stoplogs. In 1957-8, a new pumping plant intake structure with fish screens was constructed by the USBR.

Fish passage and screening at Savage Rapids Dam have been a concern since original dam construction. A fish ladder was constructed on the right abutment at the time the dam was built (north fish ladder). However, the downstream entrance to the north fish ladder was masked by flows through the existing pumping plant. A second fish ladder was added in 1934 (south fish ladder) on the left abutment in an attempt to improve passage at the site. The fish ladders were outdated and did not meet current criteria of either NMFS or Oregon Department of Fish and Wildlife (ODFW).

Early attempts to provide fish screening of the pumped irrigation diversion were unsuccessful until 1958 when fish screening facilities were added to the pumping plant intakes. These screens also do not meet current criteria. Fish passage improvements made in the late 1970s helped reduce losses, but fish passage problems continued. During high flows, fish tended to jump out of the fish ladders and become stranded on the rocks below. Water overtopping the dam, especially during high flows, distracted the adult fish from locating the attraction flows at the fish ladder entrances.

In 1971, Congress authorized USBR to undertake a feasibility study to address lingering fish passage and protection issues at the dam. Evaluation of fish issues at the dam resulted in a number of recommendations, including replacing the north fish ladder. Final designs were prepared, but the only bid received for the work significantly exceeded available funding and the attempt to replace the north fish ladder failed. Dam removal seemed an ever likely solution.

The USBR feasibility study that led towards dam removal started in October 1988. The planning report/final environmental statement documenting the study results was published in August 1995.

The recommended least-cost alternative in the report to improve fish passage and maintain irrigation diversions was to construct two pumping plants (one on either side of the river) and remove the dam. The other action alternative considered included rehabilitating the hydraulically-driven pumping plant and constructing new fish screens to retain the dam.

In 1998, NMFS sought a Federal Court injunction against GPID for unlawful take of Coho salmon. The state of Oregon also filed a lawsuit against GPID (in state court) for failure to comply with its water rights (which required GPID to resolve fish passage issues at the dam by removing it). These legal actions culminated in an August 2001 Federal Court consent decree wherein GPID agreed to proceed with dam removal.

Planning subsequent to the consent decree resulted in decisions to:

• Consolidate the pumping facilities on the south side of the river.

• Construct a pipe bridge to deliver water from the pumping plant to the canals on the north side of the river.

In 2004, Congress authorized USBR to proceed with dam removal. However initial funding for construction was not provided until 2006.

Partial removal of the dam began in April 2009 when the outlet works were used to draw the reservoir down for construction of a cofferdam around the right portion of the dam. The fishery agencies asked that reservoir drawdown and construction of the cofferdam occur in early April to minimise impacts on the spring Chinook salmon run. Once the cofferdam was completed, the outlet works were closed to raise the reservoir over the left side of the dam for river and fish passage through the south fish ladder. The outlet works then were used as needed to pass excess river flows and maintain fish passage through the south fish ladder. The right side of the dam was removed behind the cofferdam down to the foundation using excavators equipped with hoe rams. The hoe rams would break up the concrete bays of the dam and the rubble would be hauled away.

After the right side of the dam was removed, removal of the left side could not take place until the end of the 2009 irrigation season to prevent reservoir sediments from damaging the new pumping plant. In addition, moving the river to the right side was set for early October to minimize impacts to the end of the spring Chinook salmon run and the start of the Coho salmon run.

In October 2009, the reservoir was drawn down again using the outlet works and the cofferdam was removed. Low flows in the river allowed the remaining portion of the left side of the dam to be removed without a second cofferdam. A large pilot channel excavated through the upstream reservoir sediments facilitated moving the river from the outlet works to the original channel on the right side and through the removed portion of the dam. It was anticipated that the river would return to the original channel on the right side once the dam had been removed and reservoir sediments had been eroded.

The large pilot channel minimized downstream turbidity and erosion of reservoir sediments. It is anticipated that reservoir sediments would be completely eroded downstream during winter flooding. Permanent fish passage through the site was restored when the river was moved to the right side of the channel. Partial removal of the dam was completed in November 2009.

Prior to the start of construction, USBR formed an interagency coordination team comprised of representatives from the regulatory agencies, GPID, WaterWatch of Oregon, and the contractor. The purpose of this group was to make sure that all parties were kept in the loop on construction activities and to assure they could work in concert to address needed course corrections. This coordination was critical to the success of the project.

Various environmental considerations have to be taken into account with the removal of a dam. A basic premise of the sediment management plan was that the river would be allowed to naturally erode the trapped sediment once the dam was removed. Project permits were written around that concept. The initial erosion phase was set to occur at the end of the irrigation season (to avoid causing problems for the new pumping plant and before the start of the annual upstream Coho migration (to minimise fishery impacts). The major sediment erosion phase is expected to occur during the 2009 winter flood season.

Of the 153km3 of sediments that were deposited in the reservoir behind the dam, approximately 134km3 were located within an 8m deep gravel bar on the right side of the reservoir. This was immediately upstream of the dam, in the deepest part of the original river channel. The dam was removed and water was diverted to the right side of the river channel in a pilot channel after the irrigation season ended, in order to prevent eroding sediments from damaging the intakes of the new pumping plant. Removal was also scheduled to accommodate the annual salmon runs to limit stress on the fisheries.

Although the primary benefactors for removing the dam are the species of anadromous fish in the Rogue river, including the threatened SONCC Coho salmon, replacement of the antiquated pumping facilities and noncompliant fish screens mean GPID is now in compliance with regulatory requirements. In addition, the economy benefitted from the funds expended on the project, both locally and nationally. The total estimated project cost of the new diversion facility and removing the dam was about US$39.3M, with US$3M for dam removal provided by the Oregon Watershed Enhancement Board.