Reflections on a new kind of solar at Jülich

In August the Jülich solar thermal experimental and demonstration power plant was officially handed over to its future operator, the Jülich Department of Works, by the general contractor Kraftanlagen München. 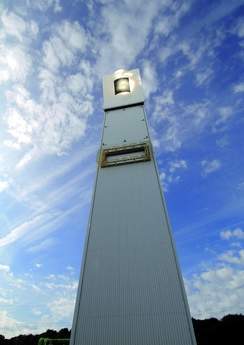 The technology at the core of the Jülich facility, the receiver, was developed and patented by the German Aerospace Centre (DLR, Deutsches Zentrum für Luft- und Raumfahrt). DLR, together with the Jülich Solar Institute, provided scientific guidance and support for the planning, design and operation of the power plant. This collaboration will continue throughout the ongoing operation to develop the technology. The entire operation is funded and supported by various federal government and state departments and is the first plant of its type to be constructed in Germany.

Construction of the tower and heliostat field by Kraftanlagen München (KAM) started in February 2008 and was completed by the end of the year. The first solar power was generated soon afterwards. The facility is currently in its testing and optimisation phase, which was scheduled to run until the end of 2009, and trial operation will commence once this phase has been completed.

The aim of the project is first to test the new technology developed by KAM and its research partners in its implementation as a complete plant, to optimise the individual components of the system and to gain experience in the operation of the power plant.

An unusual feature of the Jülich tower is that although it is on the face of it a conventional thermal facility, the working fluid is air, not water. 2153 movable mirrors, or heliostats, with a total area of almost 18 000 square metres are arranged over an area of around eight hectares. They follow the path of the sun and concentrate the solar radiation on a receiver that is around 22 square metres in area, installed at the top of a 60 metre tower. The receiver is made of porous ceramic elements through which incoming ambient air flows. In passing through the receiver, the air is heated to around 700 °C and this heat is delivered to the water-steam cycle in a heat recovery boiler. The steam generated there drives a turbine, which produces power via a generator. The power plant will supply 1.5 MWe when operated at its rated capacity.

A heat storage module that extends across two storeys of the tower is integrated into the plant. This module contains ceramic filling material through which hot air flows and which can thus be heated. When discharging, the process works in reverse – the heat storage module releases its energy so that power can also be produced when the sun is blocked by cloud cover. The use of thermal storage therefore smooths electricity production to some extent by partially decoupling heat absorption from electricity production. It has a capacity equivalent to one hour’s operation at full load. The meteorological record shows that in the Julich area around 80% of interruptions of solar gain are of 1 hour or less. In an average year solar energy is gained at the rate of 800 kWh/m2 per annum, but this figure would be doubled or more than doubled in the areas where such plants would more often operate, such as North Africa, where a land area of only a few hectares would produce the same output that Julich’s eight hectares is realising now.

The Jülich solar power plant will now be used to demonstrate for the first time the technology for a solar tower power plant, developed in Germany as a complete system. “The new facility provides a unique opportunity to further develop the technology in order to make it ready for a market launch through practical experience, and to further cement DLR’s role as a leading international developer of solar thermal power plant technologies” said Professor Hans Müller-Steinhagen, head of DLR’s Institute for Technical Thermodynamics. Professor Müller-Steinhagen added: “Of course, the sun does not shine as often in Jülich as in North Africa, but for an experimental power plant in which the technology is to be further developed, having good connections to the research institutes is more important than continuous operation.” The solar thermal power plant in Jülich thus serves as a reference for future commercial power plants in southern Europe and North Africa, and is expected to play a major role in the desert power project DESERTEC. The technology and the knowledge obtained by the researchers in Jülich will be used in sunnier regions of the world, where solar thermal power plants clearly have the greatest potential.

In addition to its role as licensor for the receiver technology, DLR was also involved in the design of the heliostat field and the receiver and in qualifying individual components within the system. Furthermore, DLR computer simulations led to the development of operating concepts and to the calculation of the annual yield of the overall facility that are important for assessing efficiency. In this regard, DLR can rely on the many years of experience gained from its development work and the test operation of solar thermal facilities at the Plataforma Solar de Almería in southern Spain.

The plant’s tower contains all the working parts of the solar steam cycle and generation, as well as the control equipment. On one of the storeys, at around half the height of the tower, DLR and its partners will set up a research platform. Researchers will be able to locate experiments behind a three-by-seven metre opening onto which the power plant’s heliostats can be focused. Included among the planned activities are tests for new receivers and experiments on the thermochemical manufacture of hydrogen using solar energy.

The project will be supported by a research programme scheduled to last several years which, as well as providing scientific support for the operation of the power plant, will develop methods for optimising operation and quality and developing the technology in order to improve the competitiveness of the unit. For example, a fully dynamic computer model of the facility will be developed which is later expected to enable real-time optimisation of operations supported by the model. Testing will be focused on material tests carried out under concentrated radiation (<2 MW/m2), absorber design, sensor system and control strategies, development of the system components and investigation of the prospects for direct production of hydrogen and synthetic fuels.