Quad Cities has cut collective radiation exposure by 80% over the last decade through a simple and integrated approach. 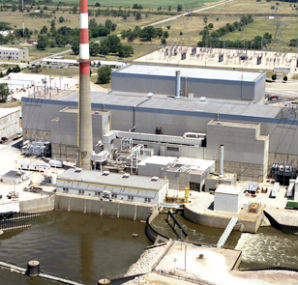 The Quad Cities nuclear power plant in Illinois is a two unit General Electric BWR-3 with a Mark I containment. The plant entered commercial operation in 1973 and is operated by Exelon, the USA’s largest nuclear operator, with a fleet of 23 reactors.

Ten years ago, due in part to the way the plant had been operated in the past, Quad Cities was the highest dose plant in the United States.
When Archie Williams started as radiation engineering manager at Quad Cities in 2005, the station was about to put in new steam driers following an extended power uprate at the units in 2002. "We were looking at the possibility of going over 1000 rem in a year," he recalls. "This made us the highest dose plant in the country."

Quad Cities’ dose was so high it was skewing the Institute of Nuclear Power Operations (INPO) collective radiation exposure performance indicators. To normalise the indicator, INPO was reporting performance figures with and without Quad Cities included.When taken in context, the ALARA programme at the plant was actually one of the best in the industry. "It’s funny that INPO was sending people to Quad Cities to look at the ALARA programme. Our programme was sound. Our dose was from the source term that we were having to live with," Williams says.

“This wasn’t an overnight change," says Williams. "We had ten years of hard, incremental work, and we are now starting to see the results."
“Plus, far as ALARA is concerned there was not millions of dollars invested. This is just grass-roots stuff, looking at improving behaviours, reducing source term and how to better plan work," he adds.

And the results are impressive. In the whole of 2014 Quad Cities took almost the same dose as in one week back in March 2004.
The road to improvement

The first step was to identify what was causing the high dose at Quad Cities. The radiation protection team segregated the dose received while the plant was online, during outage (forced and planned refuelling) and during special projects, for tracking and comparison.

Exelon also invented various tools to change worker behaviours. The first was the ‘debit card’ concept, which involved providing personnel with a dose goal before they went into radiation areas so that they would recognise the dose required to perform a task. This was a minor alteration, but changed worker perspectives from being reactive to proactive, Williams says. Second, Exelon implemented ‘spring training,’ which involved going back to basics, explaining why dose was important and getting workers engaged in dose reduction initiatives.

It came up with detailed planning spreadsheets, dubbed Zitner reports, which are used to list job tasks, craft and hours. By looking back at what has happened in the past, the plant now has benchmark ‘dose’ for a number of different cases.

The plant also changed the way that it tracks doses received during work. "In the past, we would never really know when a major milestone was met, whether we were on track for dose or not," Williams says.

Now, the plant relates the doses to the work, rather than the schedule in so-called ‘Earn vs Burn’ curves.

“Before, we would decide that we would take an average 5 rem/day. Now we look at the major milestones in the outage and determine the amount of dose we expect for each milestone. It doesn’t matter if the schedule moves, the dose is related to the work," Williams explains.

Source term reduction and improving materiel condition was a major part of the dose reduction effort. First, the US Electric Power Research Institute (EPRI) went out to Quad Cities and identified the sources elemental cobalt were coming from. Stellite (an alloy of cobalt-59 and chromium) had been used in various plant systems including the control rod drive mechanisms, turbine blades and in some valves. Stellite can become activated, increasing the inventory of Co-60 in various plant systems.

Chemical decontamination of portions of the reactor recirculation piping (found to be the main source of Co-60 dose) was carried out at Quad Cities in 2004. In addition, permanent shielding was installed in the drywell and the low-pressure turbine buckets were replaced. At unit 2, these efforts immediately resulted in a 45% reduction in Co and a 75% reduction in drywell dose rates.

Over the last decade, Exelon has also replaced the CRDMs at Quad Cities with non-stellite versions. It changed out the turbine blades at both units, and evaluated all the valves that had direct communication with the core, replacing them with non-stellite solutions where possible. The turbine casings, which were showing a lot of corrosion and were a source of iron activation products, were also replaced at both units.

All of the modifications had been completed by 2014, and Williams says this means the plant can now look forward to shorter outages.

“There was a large effort to improve the materiel condition of the plant. We are doing more preventative maintenance, so looking ahead we will be able to operate better."

Water chemistry has also had a visible impact at Quad Cities. "Before, when we used to transfer fuel during refuelling you could see rust and corrosion products coming off the fuel. We don’t see that anymore," Williams recalls.

This, he says, is thanks to hydrogen water chemistry, and zinc injection, which has been carried out at the plant since 2005-6.

The BRAC value, that is the average of the reactor recirculation suction and discharge contact dose rates, has shown marked improvement. Back in 2006 the average value from EPRI was 88mrem/hr for unit 1. In the last outage it was 19mrem/hr, and the seventh best out of the 34 plants in the United States.

While the massive dose reductions achieved at Quad Cities in the past are no longer possible, there is still potential for improvement.

“We have had areas of contamination since 1995," says Williams. "The question is – why are they contaminated, and can we make them not contaminated?

“What happens now is a change in perspective. We are challenging the old paradigm ‘It’s always been a High Rad Area, or a contaminated area.’ It doesn’t have to be that way!"

Quad Cities has identified a number of areas that it can decontaminate. This reduces dose because personnel can access an area easier and maintain the area clean with less effort. Areas with historical ‘hot spots’ and high source term are being evaluated to remove the source term and modify processes to ensure that the hot spot doesn’t develop again.

Williams says there has also been a change in behaviours at the plant: "People are now suggesting areas that could be improved. They are looking at ways that will make their lives easier."

Engineering teams are coming up with design modifications that can have a key role in minimising future maintenance and dose impacts. Williams says that welders are suggesting replacing socket welds, which have a ridge that can lead to build up corrosion products, with alternative solutions.

Being part of a large fleet may have also factored into the improvements at Quad Cities. Exelon currently operates 23 reactors at 14 sites in Illinois, Maryland, Nebraska, New Jersey, New York and Pennsylvania. ALARA plans are reviewed and commented on during a weekly conference call. In addition there is a close relationship (along with some friendly competition) between Quad Cities and Dresden, which is a sister plant of the same design, also in Illinois. “Each plant has a different strength so we will implement them through learning and sharing," says Williams.