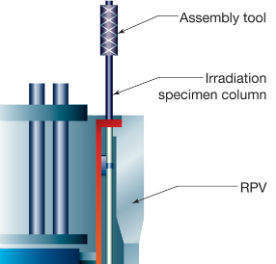 A reactor pressure vessel (RPV) is designed, manufactured and operated in a such a manner that it should not fail in service. To resist failure, its steel structure must remain ductile and not become brittle. A sudden failure of an RPV could be catastrophic even before considering the contents of the pressure vessel, because of the sudden release of a large amount of depressurising energy. Fracture resistance or fracture toughness is the relevant material property in structural integrity assessment of the RPV. Before the RPV enters service, structural integrity depends upon design and construction to recognised and well-established codes, the use of carefully-specified and -tested, highest-quality materials, fabrication using tried-and-tested procedures, a comprehensive quality assurance programme and extensive ultrasonic inspection during fabrication. The importance of this last aspect is highlighted by the economic impact and safety concerns of the hydrogen flakes discovered in the RPVs of Doel 3 and Tihange 2.

During service, the integrity of the RPV depends on multiple factors:

Data about degradation of mechanical properties from neutron irradiation can be gained in advance from surveillance programmes. Samples of the vessel material from manufacture are usually inserted inside the operating RPV for irradiation at a neutron flux that is higher than that received by the RPV wall (Figure 1).

For many years an important test of the fracture resistance of PV steels has been the empirical Charpy V-notch test (Figure 2) in which a pendulum of known dimensions and weight hits a notched specimen.

The seventh framework programme of research and training projects of the European Commission’s European Atomic Energy Community (Euratom) included funding for a research project on Treatment of Long Term Irradiation Embrittlement Effects in RPV Safety Assessment (known as LONGLIFE). The project, 50% funded by Euratom, was coordinated by the Helmholtz-Zentrum Dresden-Rossendorf and successfully finished in January 2014 [Nuc. Eng. Des. 267 (2014), pp. 197-206]. The project contributed to the reliable monitoring of long-term irradiation effects in RPVs, and supported European efforts towards harmonisation of procedures for RPV surveillance and safety assessment in the light of long-term operation (LTO).

Surveillance testing of archival RPV materials to monitor the true material conditions is still preferred over any kind of merely predictive methods. The significance of surveillance testing has been greatly enhanced by recent developments in test techniques that make possible a direct fracture toughness determination even with miniature-size specimens. On the other hand, in many older NPPs, the lack of adequate surveillance programmes, increased safety requirements as well as the pursuit of life extensions presume that the RPV material conditions should be very predictable over the planned service life. This has led to a situation where irradiated materials testing has to be performed with continuously decreasing amounts of test materials.

A well-known approach for using diminishing surveillance materials more effectively is to prepare new specimens from tested ones or sub-size blanks by reconstitution, as in Figure 2. This technique applied together with small-specimen testing enables at best the utilization of almost all of the applicable — that is, un-deformed — surveillance material. Using advanced welding techniques like the Electron Beam Welding (EBW) or Laser Welding (LW), even a 10mm insert length has proven to be sufficient for a Charpy specimen without detrimental temperature increase during the welding process.

A brief history and a detailed state-of-the-art review on both small-specimen testing and reconstitution techniques, including some new verification data on EB welding, are given in ‘Reuse of tested irradiated surveillance specimens’ by M. Valo et al, LONGLIFE Deliverable D7.2, October 2013.
In the case of subsize specimens (3×4mm or 5×5mm) the correlation with transition temperatures from standard-size Charpy specimens should be verified, as some data show that the brittle-to-ductile shift in subsize specimens can be much smaller than in standard ones. The ASTM E1921 standard is generally applicable for miniature specimens, but there are aspects worthy of special consideration for very small specimens. The same applies to their reconstitution, since the present standard on reconstitution welding does not cover specimens smaller than normal Charpy size.

The LONGLIFE project also suggested measures for enhancing the reuse of tested specimens:

Many utilities are considering extending the operational life of an RPV to 60 years, and in the USA utilities’ life extension plans often mention lifetimes of 80 years. Guidelines for monitoring radiation embrittlement during life extension to 60 or 80 years were developed in LONGLIFE. The study identifies weaknesses of the standard surveillance programmes in providing the data needed for long-term operation, and proposes solutions and tools to solve and/or mitigate the lack or scarcity of surveillance material for life extension.

Firstly, an enhanced surveillance strategy can be developed for any RPV. A good example comes from the reactors operated in Belgium. For more than a decade, the surveillance programmes of the Belgian reactor pressure vessels have consisted of two complementary approaches. The first one is strictly regulatory, following the prevailing standards and codes applicable in Belgium. The second non-regulatory approach consists of using as much available data as possible in a physically-based frame to support the results from the regulatory approach. This enhanced surveillance is considered as a quality assurance tool in support of the surveillance programme testing and evaluation.

The enhanced surveillance approach consists of using the instrumented Charpy impact tests to develop a so-called load diagram that incorporates tensile as well as Charpy impact data in a consistent way. More physically-based transition temperatures can also be determined. Moreover, fracture toughness tests are performed on reconstituted specimens. Finally, the hardening model allows verification that the experimentally-measured surveillance data are well within the predicted trend curves. All this additional information contributes significantly to enhancing the reliability of the RPV integrity assessment; this is essential in the perspective of long term operation

Secondly, although standard RPV surveillance programmes are designed to cover design life, usually a period of 40 years, they frequently have the potential to cover a larger period. Several options should be evaluated by the plant managers to use the available surveillance capsules for life extension:

The basic design and an updated withdrawal scheme of a surveillance programme for LTO conditions is documented in ‘Guidelines for Monitoring Radiation Embrittlement During Life Extension Periods’ by A. Ballesteros et al., LONGLIFE Deliverable D7.5, March 2013.

Since the beginning of the development of nuclear reactors there has been a continuous increase in knowledge of the effects of irradiation on RPV materials, and today there are a number of choices available to monitor radiation embrittlement during long-term operation. The surveillance guidelines developed in the LONGLIFE project will be a important reference in future evaluations concerning the implementation of LTO vessel surveillance programmes.