Radwaste in Korea: how much is there?

Overview of the low- and intermediate-level radioactive waste situation in South Korea at the end of 2013, with future projections. 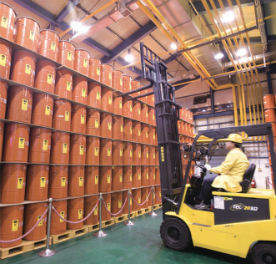 The vast majority of the LILW is currently being stored at the Korea’s four nuclear power plant sites, Wolsong, Kori, Hanul and Hanbit (see Table 1), where it is typically stored according to activity level in a concrete slab-type building, equipped with radiation monitoring systems. However, by the end of 2013 about 2700 waste drums had been shipped to the Wolsong LILW disposal facility, where they are awaiting disposal.

Long-term estimates predict five times this volume of radioactive waste (LILW), some 480,000 drums, will be generated by the operation of the 34 Korean nuclear power plants that are due to be online by 2024, as per the Sixth Energy Plan (Table 2). About the same amount again is expected from decommissioning operations, which are predicted to span a period of ten years after the closure of the reactors.

Three quarters of the radioactive waste generated from nuclear power operations is expected to fall into the LLW category; most of the rest will be VLLW. Radwaste arising from decommissioning of Korean nuclear power plants is anticipated to comprise 4% ILW, 29% LLW and 67% VLLW.

In addition to nuclear power operations, LILW generated from the use of radioisotopes in industry and research is collected and stored at the Radioisotope Waste Facility operated by Korea Radioactive Waste Agency (KORAD). At the end of 2013, some 3190 drums of RI waste were stored there. An additional stock of approximately 22,000 drums of LILW were in storage at the KAERI research institute and some 7000 at KEPCO’s nuclear fuel fabrication facility.

These estimates predict close to a million drums of LILW, however the Korean repository is only being built with capacity for 800,000 drums. As a result, KORAD says it is necessary for volume-reduction facilities to be operated, for radioactive waste to be sorted according to a more detailed classification, and for new strategies of treatment and disposal to be developed considering the characteristics and activity of the wastes.

Korea’s repository for low- and intermediate-level waste has been completed and is due to start accepting waste later in 2014. See: Korean respository realised for more details on the repository development.