Public safety around dams: is it taken seriously enough?

Public safety is part of the social licence to operate dams, says Tony Bennett, Chairman of ICOLD’s Technical Committee on Public Safety Around Dams. Here he talks with Suzanne Pritchard and explains why the subject needs to be ranked as an important technical discipline alongside dam safety. 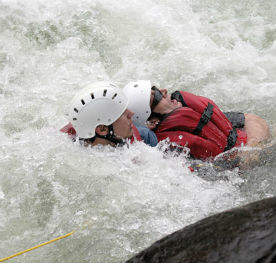 Keeping the public safe is one of the main reasons why the dam industry works hard to ensure structural integrity and prevent failures. However an increasing number of incidents are giving cause for concern that non-structural hazards are also endangering lives at dam projects.

“In fact it is common in most countries," says Tony Bennett, Director of Dam and Public Safety with Ontario Power Generation (OPG) in Canada, "for more people to die as a result of operational issues at dams than because of actual dam failures."

Bennett uses North American examples to illustrate his point. Dating from 1905, there has been only 11 fatalities in Canada as the result of five recorded dam failures – the last one being in 1966. In contrast, according to the Canadian Lifesaving Society, 27 people have drowned at dams across the country during the period from 1995-2004. During an even smaller time span from 21 June to 8 July 2013, 39 public safety incidents were reported in the media at North American dams which led to 23 fatalities.

Why are public safety incidents around dams on the rise?

Such figures have made public safety around dams an area of increasing importance for the dam industry. But why do such incidences appear to be on the rise?

“The public is changing," Bennett explains. "There is an increase in public interaction at facilities. People are participating in more recreational and extreme sporting activities near dams. Previously access to projects was difficult but all-terrain vehicles and personal watercraft have made dams more accessible."

"The potential risks associated with dams and hydro facilities are also often underestimated by the public."

The potential risks associated with dams and hydro facilities are also often underestimated by the public. The sudden opening of spillways or the start up of hydropower generation on a sunny day can turn relatively tranquil conditions into dangerously turbulent waters. This is not obvious to the public, especially for those unfamiliar with the rivers and the operations.

There are also public misconceptions about smaller dams being less hazardous. People can be unaware of the recirculating hydraulic phenomenon at the discharge of these low head dams, known as the drowning machine effect. "There is a disproportionate number of fatalities associated with small weirs," says Bennett. "People look at these places and think that they look nice, calm and serene but there is a real lack of understanding on just how dangerous the situation can be."

Problems can also be exacerbated as many dams are no longer managed and operated by onsite personnel. More are remotely controlled.

“Dam owners are having to up their game being more proactive in how they manage public safety, including the installation of protective measures in order to meet the test of due diligence," Bennett adds.

"Owners and operators have been encouraged to focus on how to assess risks associated with their projects in order to avoid more fatalities in the future."

Indeed owners and operators have been encouraged to focus on how to assess risks associated with their projects in order to avoid more fatalities in the future. Certain utilities and organisations have taken up public safety initiatives. Prompted by fatalities, EDF in France and OPG in Canada have led the way.

In 1995 a sudden rise of water from the Notre Dame de Commiers dam in the French Alps drowned six children and their teacher who were hiking by the Drac River as part of a school outing. This prompted hydraulic safety to become an absolute priority at EDF; prevailing over electricity generation if it must. National, regional and local management all work to control safety at EDF, along with an independent hydro safety inspector who maintains oversight on the process. The utility has worked diligently to develop a "safety culture" amongst employees and extends their efforts to raise public awareness of hazards along the rivers. Through its public safety risk assessment programme it has significantly reduced risks to the public.

In 2002 a mother and child were drowned following the opening of a spillway gate at OPG’s Barrett Chute dam on the Madawaska River in Canada. Tony Bennett says that this prompted his company to re-evaluate how they managed public safety at their facilities. An immediate review indicated there was an absence of industry guidance which prompted OPG to set about creating its own governance and managed system requirements covering public safety at its dams. These have since been recognised internationally, and have been used to form the basis of guidelines for the Canadian Dam Association which were published in 2011. The OPG policies require a managed system approach to public safety incorporating such aspects as:

Bennett adds that Canada and Norway stand out for developing national guidelines on public safety around dams. As well EDF in France and Swedenergy in Sweden, US entities such as the Federal Energy Regulatory Commission, the US Bureau of Reclamation and the US Army Corps of Engineers have also developed their own guidelines. However national guidelines and legislation are lacking as a whole.

“It is common in many jurisdictions to have dam safety legislation to address issues of dam failures," Bennett comments, "but public safety measures are certainly not as well developed from a regulatory standpoint."

With increasing awareness that there is a real need to provide technical guidance in this area ICOLD began to focus on the problem. The ICOLD European Club convened a Working Group on Public Safety, chaired by Urban Norstedt from Sweden and tasked them to look in to the subject of public safety around dams. Their recommendation was that ICOLD establish a technical committee – this was approved by the ICOLD General Assembly in Hanoi, Vietnam in 2010.
Tony Bennett was appointed to chair the committee which is working towards preparation of an international state of practice report, plus an ICOLD Bulletin on public safety around dams.

“There are a number of areas which we need to address regarding public safety," he says. "We need to educate the public as well as dam owners and regulators not only about the current hazards associated with dams and their operations, but also with how to assess the impacts of change." These changes can come about as the result of a variety of factors ranging from shifts in operating regimes to changes in patterns of public interaction and access to the facilities. The dynamic nature of the issues and the potentially fatal consequences involved imply that owners and regulators need to constantly re-evaluate the risks associated with dams and their operations.

“There are some very innovative practices out there that owners have implemented to reduce risks to the public," Bennett continues, "and our committee is seeking to document these in the state of practice report. This will form the basis for the development of the ICOLD technical bulletin on public safety around dams. We are aiming to produce tools to help owners to carry out risk assessments and put in place the appropriate controls, as well as to provide the guidance needed for regulators to manage the oversight of public safety."

"The technical committee is striving for public safety to be seen as a technical discipline which is fundamental to maintaining safe dams – on the same level as traditional dam safety reviews and preparation of emergency plans."

Bennett goes on to talk about the fact that perhaps some people think the ICOLD committee will just look at the physical aspects of public safety, such as providing a standard for signage and barriers. However he believes that there is much more to be gained from looking at operational practices and processes to assess change. For example how are gates opened? Precisely which areas downstream will be inundated by water releases? Are appropriate and sufficient warnings given to people downstream prior to this? These are important issues which must be addressed even for small water events.

The technical committee is also striving for public safety to be seen as a technical discipline which is fundamental to maintaining safe dams – on the same level as traditional dam safety reviews and preparation of emergency plans. There are numerous technical publications reporting on dam failures in the literature, Bennett says, but very few are written from a technical perspective to document public safety incidents.

“This is part of what the ICOLD committee is trying to change. We want to help facilitate proper reporting of these events. If they are documented sufficiently then we can learn from this information and hopefully use it to prevent more incidents and fatalities in the future."

But why are technical reports lacking on public safety? Bennett explains: "Public safety crosses many disciplines. We’re not able to just categorise it simply under traditional headings of civil or hydro technical engineering. Though it involves these aspects it also crosses various other lines such as gate operations, health and safety, public outreach, law and to a certain extent security of the site."

The ICOLD Technical Committee on Public Safety Around Dams is experiencing a steady growth with over 20 national committees appointing members to date. Bennett is very impressed with the quality of the discussions and the work the committee has put in to date.

“Public safety is a fundamental tenant of the social licence to operate dams," he says. "In the future there will be an even greater onus on owners to assure the public and regulators that public safety is being effectively managed. Retrofitting existing control dams with hydropower, or addressing changing public safety risks associated with shifting operating patterns to follow intermittent loads on the electrical grid created by wind and solar energy sources, are just some of the demands which will emerge to the dam industry. This will change the operation of such facilities and their associated hazards.

“We must realise," Bennett cautions, "that hydropower and dams in the community will not be accepted if fatalities keep occurring."

Public Safety Around Dams and Waterways by T Bennett, A Petitjean and U Norstedt. ICOLD. Innsbruck 2010.
Final Report of the Working Group in Public Safety at Dams. ICOLD European Club. Coordinator U Norstedt. 2012.

For more information on the ICOLD Technical Committee on Public Safety Around Dams contact the chairman Tony Bennet at OPG.