Portable air power from Atlas Copco is being used to apply the facing to the Nakai dam, part of the US$1.25B Nam Theun 2 hydroelectric project in Laos 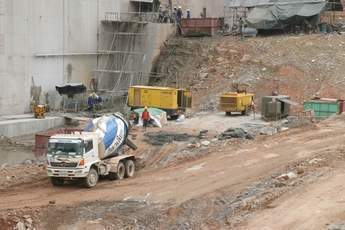 The Nakai dam is a 39m high, 436m wide concrete gravity structure that is being built on the Nakai Plateau in the central highlands of Laos as part of the Nam Theun 2 project. Once complete, a 450km2 reservoir will form behind the dam.

Nam Theun 2 is the largest foreign investment project ever undertaken in Laos and is being undertaken as a venture with neighbouring Thailand, which will buy 95% of its electricity supplies, the remainder being used domestically. The project is being sponsored by Electricite de France, which has 35%, Electricity Generating Public Company of Thailand, with 25%, the Lao government-owned Lao Holding State Enterprise, 25%, and Thailand’s largest construction contractor, Italian-Thai Development, which has 15%. Italian Thai Development is building the dam to a design developed by Klohn Crippen Berger of Canada.

The location of the dam is a remote one, and heavy flooding occurs here and along the sole highway link during the wet season and other sporadic times of the year. Klohn Crippen Berger recommended a roller compacted concrete (RCC) dam because the geography of the site allowed the structure to be kept at a relatively modest height and, as such a design uses less volume of material than an earth-fill or rock-fill structure, greater speed of construction could be achieved.

The contractor is therefore using a continuous supply of a stiff, zero-slump concrete mixture with the consistency of damp gravel comprised of local aggregates, Portland cement and water. The mixture is produced in silos on the downstream side of the dam and trucked the 200m to the dam crest, where it is placed in layers of 30cm in thickness and then compacted using standard steel-drum rollers.

Immediately after the machines have completed the compaction, water is applied as a fine mist to cure the concrete. In this way, the dam crest is built up layer by layer.

Both abutments have been built to their full height, and the RCC is being applied in layers between them. As very little formwork is used in RCC dam construction, the downstream face of the structure presents a rough appearance that needs a more aesthetically pleasing surface.

To achieve this surface, an Atlas Copco XRHS385 oil-injected rotary screw compressor is being used. The portable air supply is providing an actual free air delivery of 22.3m3/min (790ft3/min), working at an effective pressure of 20 bar.

The unit was supplied to Italian Thai Development by Atlas Copco (Thailand) Ltd, whose manager for compressors and generators Adisorn Moleesaide said that the need was for continuous operation in a remote site where only routine spares could be stored, and where any serious breakdown would inevitably mean a long delay, the Thai border being a distance of 140km of dirt road, frequently made almost impassable by rainfall.

‘A workhorse was needed,’ said Moleesaide, ‘and this the XRHS 385 most certainly is, because it is built for conditions such as these.’

Work was carried out with a number of grinding-and-polishing handtools, with the abutments being the first stage. The compressor has been placed against the downstream face of the dam, and works on a continuous basis during two eight-hour shifts.

Preliminary work on the Nakai dam got fully underway in the middle of 2005, and completion of the entire project is due in late 2009.

Applying the facing at Nakai dam