Plugging dam safety down under

Construction of a fuse plug spillway at Copeton Dam in Australia is one of several safety upgrades being undertaken. By Nava Jeyachandran and Jane Urquhart. 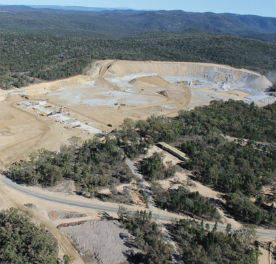 Copeton Dam is a 113m high, zoned, clay core, rockfill embankment dam, located on the Gwydir River in northern New South Wales (NSW), Australia. The dam is owned and operated by State Water Corporation and is a major piece of infrastructure for NSW. It is a very popular location for recreation, with more than 100,000 visitors each year to the Copeton Waters State Park (CWSP).

Constructed in three stages between 1968 and 1976, the dam impounds a maximum storage of 1,364,000 ML. The reservoir plays a major role in sustainable water management through its flood mitigation, environmental releases and river flows. Copeton Dam supplies water to meet the town water, stock and irrigation demands of Moree, Inverell and Bingara.

A separate gated spillway consisting of nine radial gates and a concrete chute is located 500m from the dam on the right abutment. This has the capacity to release 1,280,000ML/day.

"Without dam safety upgrade works there was a risk of dam failure in extreme flood events."

Dam safety reviews have identified Copeton Dam as an ‘Extreme’ flood consequence category (FCC) dam, which does not meet the statutory requirements of the NSW Dams Safety Committee (DSC) safety standard requirements and the Australian National Committee on Large Dams (ANCOLD) guidelines. Under both ANCOLD guidelines and NSW DSC requirements, extreme consequence dams are required to be able to safely pass the probable maximum flood (PMF) with the reservoir at full supply level (FSL). Without dam safety upgrade works there was a risk of dam failure in extreme flood events. This risk results from the inability of the existing gated spillway to release a sufficient volume of water, potentially causing the embankment to overtop and leading to a possible failure of the dam wall. The failure of Copeton Dam wall would have catastrophic downstream impacts; economically, environmentally and socially.

To achieve PMF compliance, State Water embarked on a major upgrade of the dam to ensure that it can handle extreme floods. This involves two stages of construction:

Stage 1 of the safety upgrade involved the construction of an auxiliary fuse plug spillway in the Diamond Bay area of the dam storage, approximately 1km from the left abutment. The new spillway is 250m wide, 12m deep and divided by concrete divider walls into four fuse plug sections. At full supply level, the fuse plugs will store up to 6.5m of water against them. Should the existing spillway capacity be exceeded the new fuse plugs would activate. Each bay of the spillway is designed to release sequentially to pass extreme flood events. The first of the four bays will be designed to trigger at a 1 in 2000 annual exceedence probability (AEP).

The Stage 2 works (future works) involves raising the dam crest by 1.65m, along with modifications to the existing spillway gates to accommodate a PMF. The Stage 2 works will be subject to a portfolio risk assessment.

Stage 1 of the upgrade commenced in April 2011 and was completed in March 2013. In broad terms, it included the following:

The engineered cofferdam was constructed to provide a dry area for construction regardless of the water level in the dam. This meant the project could continue without any increased risks to the downstream communities and that the construction activities and normal dam functions weren’t affected despite the dam’s water level rising from 50% to 100% of capacity (17.8m of water) during construction.

To make way for the new spillway, comprehensive consultation contributed to successfully relocating CWSP infrastructure facilities, power lines, water mains, telephone lines and other items prior to construction of the fuse plug spillway. New park facilities were also constructed including a new administration building, manager’s residence, water playground, picnic tables, road infrastructure and other facilities. Careful planning and consultation meant access to the park was operational throughout the works.

"The project was completed five months ahead of schedule, 23% under budget with excellent quality and environmental outcomes."

Blasting work was carried out within close proximity to the operational recreation park. Monitoring of all blasts for noise, vibration and dust were undertaken for each of the 40 blasts. The results indicate that all blasts complied with the requirements of the specification and did not exceed the acceptable limits. There were no reports of flying rock from the blasts travelling any further than 100m from the front face of the blasts.

Safety was a major consideration during the project and no lost time injuries were recorded over some 98,000 hours of work. Only 13 minor incidents occurred and were reviewed and any necessary actions taken to prevent recurring.
A comprehensive communication and consultation strategy was also implemented during the project. More than 130 positive media articles were recorded in local, state and national media during the works.

The project was completed five months ahead of schedule, 23% under budget with excellent quality and environmental outcomes. Indeed the Copeton Dam Safety Upgrade Project won a Highly Commended Award in the Project Management category of the 2013 Engineers Australia Sydney Division Engineering Excellence Awards.