North of the border – replacements at Cruachan 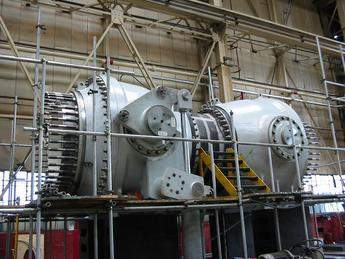 AK Heavy Engineering (AK) of the UK, formerly the manufacturing division of Kvaerner Engineering and Construction, is carrying out a contract for the replacement and refurbishment of two 100MW turbines at the Cruachan pumped storage power station in Argyll, Scotland, UK.

The company is also building two new 60t, 1700mm diameter main inlet valves (MIVs) and refurbishing two existing units, which all feed stored water to the turbines. This contract forms part of a US$34M plant upgrade announced recently by owners ScottishPower, which will boost peak power by 20%. The US$4.6M contract was placed by GE Energy’s UK branch on behalf of ScottishPower.

AK and its forerunners have history of supplying hydro power equipment to GE, dating back to 1928. Its factory in the city of Sheffield has resources for performing machining, fabrication, assembly and testing in-house; and the handling and logistics capabilities for shipping huge fabrications. Its procurement facility was sourced quality castings and other components, bought both locally and across Europe.

Commissioned in 1966 and officially opened by HM The Queen, Cruachan is one of only four pumped storage power stations in the UK and was the world’s first high-level reversible hydroelectric scheme.

The power station is situated near the town Oban and concealed within the hollowed-out rock of a mountain; Ben Cruachan. The main cavern inside houses four turbines currently capable of generating 400MW of electricity.

The turbines are powered by water from a reservoir at the top of Ben Cruachan, 396m above, which flows via 5m diameter concrete-lined penstocks, and then into steel pipes, terminating in the main inlet valves. When power generation is required, the valves are opened to allow a high pressure influx of water, which drives the Francis turbines and thence the rotary electrical generators, then flows out into a surge chamber and tailrace tunnel, down to the lower Loch Awe reservoir.

At night, the reversible turbines use surplus off-peak electricity from the grid, to pump water from Loch Awe back to the upper reservoir, in readiness to meet peak demand next day. The value of this scheme is that it produces electricity for the grid in only 2min, or just 30 sec if the turbines are on spinning reserve, thereby allowing for sudden surges in power consumption.

AK’s Cruachan contract first involved refurbishing turbine units 1 and 2, replacing parts with new as required. For each turbine, the two main structural components are carbon steel top and bottom covers, weighing 30t each and measuring 3.4m in diameter. These are bolted to the stayring of the spiral casing and designed for extremely high stiffness. The existing top covers have been extensively refurbished, while the bottom covers are new items – sourced as rough machine castings in France – which have been fully machined in-house and checked for alignment.

For each turbine, a total of 16 new stainless steel guide vanes – used to control flow onto the runner – were also supplied, again precision machined and hand polished to a precise profile. Components for the equivalent sets of guide vane apparatus to open and close the vanes were also sourced, including the regulating ring, self-lubricating bearing rings, carbon steel levers, s/s-overlaid steel hubs, pin bearings and fasteners. All 16 were then assembled for final technical inspection.

The 15t, 3.16m diameter turbine runners were supplied as finished stainless steel castings by GE’s Norway facility, which CAD designed the unusually offset blade pattern and simulated operation with computer models. AK machined the runners for fitting 12 shaft-coupling bolts apiece and supplied new S/S bearing rings, which act as non-contact water bearings for the runner. It also provided refurbishment and NDT of the main 3m long x 1m diameter turbine shafts, as well as repair and replacement of the shaft bearings and seals.

In addition to the turbines, AK has also fabricated new MIVs to feed units 1 and 2. Weighing 60t, these 1.7m rotary valves consist of three major components, which were sourced as rough castings, then machined and assembled in Sheffield. AK also fabricated the s/s service seals and liners, which shut off any water leakage when the MIV is closed, and the equivalent maintenance seal arrangement, used when dewatering and working downstream. It will also undertake refurbishment of the MIVs serving two further turbines.

AK carried out all function tests in house, including back-to-back pressure testing of the MIVs, alignment checks on the turbine castings and profile verification on the guide vanes. Representatives of GE and its consultants, Mott MacDonald, were on hand to inspect and sign off each stage. Improvements were also implemented by va-tech-hydro, the main contractor on the generating side.