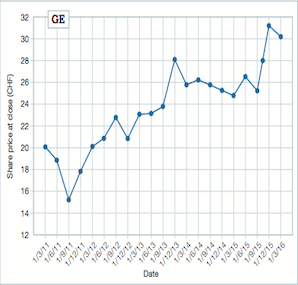 The company is undergoing major restructuring, and from January 2016, the number of divisions has been reduced to four, with the launch of Power Grids, comprising parts of the former Power Products and Power Systems divisions. The other three divisions are: Discrete Automation and Motion; Process Automation; and Electrification Products.

The shift towards renewables is likely to result in a more complex grid in the future, ABB says, with multiple feed-in points from traditional plants and large-scale renewables, combined with a proliferation of rooftop solar panels.

For businesses in which ABB is involved, the USA and China both show positive signs, but the market remains impacted by modest growth in Europe and geopolitical tensions in various parts of the world, the company says.

GE has been involved in several major acquisitions and divestments as it transforms itself back to its industrial and manufacturing roots. GE consists of eight businesses: Appliances & Lighting; Aviation; Capital; Energy Management; Healthcare; Oil & Gas; Power & Water; and Transportation.

In April 2015, the board of GE formally decided to move the company away from involvement in the capital and finance markets, and to focus on industrial markets. The company had been very exposed as a financial institution, and had suffered during the 2008 financial crash as a result.

During 2015, GE acquired Alstom’s fossil, renewables, and grid businesses for $10.1 billion, and it acquired Metem Corporation (provider of precision cooling-hole manufacturing technologies for turbines) in December. GE split off the consumer finance group as Synchrony Financial in a $20.4 billion share exchange, and GE announced in April 2015 that it would sell most of the assets of GE Capital, only retaining GE Capital businesses directly relating to GE’s core industrial businesses. GE estimates this sale could be valued at $200 billion. GE also announced in December that it plans to sell its Appliances business to Haier, expecting to close the $5.4 billion deal in 2016. To complete a busy year, GE also announced that it would be moving its corporate headquarters to Boston, USA.

Mitsubishi Heavy Industries (MHI) consists of four segments: Energy and Environment; Commercial Aviation and Transportation; Defence and Space; and Machinery, Equipment and Infrastructure. Based on sales for 2015, these segments represented the following proportions of MHI’s business: Energy and Environment, 40.1%; Commercial Aviation and Transport, 13.3%; Defence and Space Systems, 12.1%; Machinery, Equipment and Infrastructure, 33.1%; and other, 1.5%.

The Energy and Environment segment has remained stable, with the fall in fossil-fuelled power plant orders in 2015 being balanced by an increase in chemical plant orders. Of particular interest, in Q1-3 of 2014, MHI received 26 orders for gas turbines (nine large and 17 medium and small), whereas in Q1-3 of 2015, turbine orders had fallen to just 12 orders (ten large and two medium and small).

MHI is facing claims over failures of replacement steam generators at the San Onofre nuclear power station in California, USA. Excessive wear in the steam tubes resulted in the plants having to be taken out of service.

This has led to a dispute over the amount of damages. The operator, Southern California Edison, is claiming $7.57 billion, while MHI claims its liability is capped at $137 million. The International Chamber of Commerce (ICC) is arbitrating, and is expected to come to a decision in late 2016 or early 2017. If the adjudication is towards Southern California Edison’s claim, that will represent over 20% of MHI’s total annual revenue.

MHI is also anticipating expenses resulting from what it describes as "glitches" involving the steam turbine blades at KEPCO’s Himeji 2 plant.

Final stage blades in units 3 and 5 have bent and broken, resulting in the two units suffering damage and undergoing a forced outage. KEPCO had to carry out emergency repair work for all six units at Himeji 2.

MHI is still undergoing integration of its fossil power business with that of Hitachi, which will also entail additional costs over the next year.

Over the last five years, Siemens’ revenue has remained stable, ranging between €71 billion and €78 billion.

The company has been active in acquisitions and mergers, the most notable acquisitions being the Rolls-Royce Energy gas turbine and compressor business in December 2014, Dresser Rand in June 2015, and CD-adapco in January 2016. An attempt to merge the wind power assets of Gamesa of Spain with Siemens is, at the time of writing, on hold.

The company identified three target fields for growth in the power sector. These are: flexible and small gas turbines; offshore wind power; and distribution grid automation and software.

In January 2016, the company was confident about achieving growth, and Joe Kaeser, President and CEO of Siemens, said: "We delivered a strong quarter (Q1, 2016), and are well underway in executing our Vision 20-20. Therefore, we will raise our earnings outlook for 2016, even though the macroeconomic and geopolitical developments remain a concern."

This was on the back of an announcement in December 2015 that it would be increasing investment into research & development by €300 million to a total of €4.8 billion for fiscal year 2016, with the majority of the extra funds going into digitalisation and decentralised energy systems.

Siemens is moving its corporate headquarters, and is due to move into the new headquarters in Munich in summer 2016.

All the companies predict that the major growth areas in the power sector in the near future will be renewables, flexible gas turbines, and improvements in network control. None of the companies predict a significant upturn in the global economy, with concern being expressed about continuing slow growth in China, with consequent impacts on the rest of the world.

In terms of predictions, based upon the current financials, GE looks to be in a strong position, ABB and Siemens look to be
stable, and MHI could face a difficult few years.