In part two of his review of the Hydropower ’05 conference in Stavanger, Norway, Jon Last looks at papers that focused on financial issues 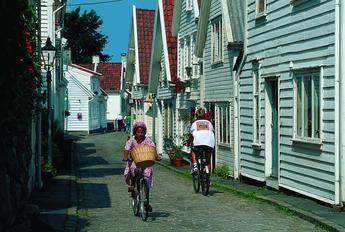 Money, the famous phrase suggests, makes the world go round. It certainly plays a large role in the hydro industry. Whether you’re building a new project, in the process of uprating and refurbishment, or even decommissioning a scheme, how you obtain the funding for these projects can often be a complicated and lengthy procedure. For this reason, it is important to discover the options available to you. The Hydropower ‘05 conference, held recently in Stavanger, Norway, offered such an opportunity by providing attending delegates the chance to share experiences of financing hydro schemes, and featured a number of papers focusing on different funding options.

One of the very first presentations of the conference was from an organisation synonymous with large scale funding: ‘The hydropower option and the World Bank; evolving responsibilities and challenges’ by D. Grey of the Bank.

Grey started by talking about the Bank’s history of funding hydro power. It has not been too prolific in recent years – whereas in the 1970’s 3.5% of dams built in the world used funds from the Bank, the organisation was only involved in the commissioning of 1% of the 400 dams built worldwide in the 1990’s. But Grey insists that this is a trend that is being reversed, and indeed his paper is very complimentary towards hydroelectricity as a power option; it praises water for being multipurpose as it can be stored and regulated, used for irrigation as well as power generation.

The Bank has investigated growth and climate in Africa. The paper talks about the countries of Kenya, Ethiopia, Zimbabwe, Tanzania and Mali, stating that they have a hydroelectric potential that has not been realised, and there is scope (and indeed the need) for far more irrigation, especially in Ethiopia.

However problems can arise when trying to amicably distribute shared waters. Ninety percent of the world’s countries share at least one river with each other, one only need think of the Rhine in Europe and the several waters shared by India and Pakistan.

In Africa, there are approximately 60 river basins and 10 countries share the Nile alone. And with water comes power – to generate electricity, of course, but also for irrigation and to drink. In a mostly dry country such as Africa it is especially precious, so just how this valuable resource is divided up is often a matter for intense dispute; in his presentation Grey made this rather chilling declaration: ‘the wars of the 21st century will be over water’.

The key to cooperation, according to the paper, is combining the countries’ independent agendas and amalgamating them to create a unanimous and mutual agenda – a plan that is theoretically easier if there are fewer countries involved. The Bank, for its part, is keen for sales agreements between water-sharing countries, so they are bound together with a common interest, that can hopefully evolve into smooth cooperation. If the countries can work together in a politically amicable way to see the vast benefits of exploiting water then hopefully conflict can be avoided.

Another important cautionary point the paper makes is that it is important to put sound investment into hydro power plants to avoid being left with a poorly realised project. It is obvious that there is a lot of unexploited potential out there – Norway has a potential of 27,300MW with 47,200MW developed, Ethiopia uses only 700MW of its 45,000MW potential – but it is crucial that any projects are of a high enough quality, so as to result in an plant that runs as efficiently as it should and also takes into account the environmental issues of its region.

Monday’s session bought with it the paper ‘Financing hydropower in deregulating markets’, by Øistein Andersen, CEO of SN Power. Deregulation was a concern of several papers at Hydropower ’05, and this particular one focuses on understanding the new climate for financing hydro power projects in developing countries.

Unlike the majority of Western countries where deregulation takes place in a climate of established and well-developed energy infrastructure, the energy markets in developing countries are usually growing and expanding at the same time as they are undergoing the deregulating process. The paper seeks to understand this new climate for financing hydro power, and assesses the risks and challenges, using SN Power’s own investment in India’s 192MW Allain Duhangan project as a specific example.

The paper compares government-backed Power Purchase Agreements (PPA) to the merchant markets created by deregulation. At first, many governments were entering into long-term PPAs with private investors, reducing the off-taker risk for the investor. These agreements were usually calculated on a cost plus basis that guaranteed the investor an acceptable return on their investment, and are still used in several markets. But under deregulation, government-backed long-term PPAs are supposed to disappear and be replaced with various types of spot-pricing and short-term contracts. These do not provide the level of risk-reduction that comes with a PPA’s governmental support, and carry with them new challenges, such as the risk that private investors may not take a chance on investing in deregulating markets. However, the freedom that such a marketplace offers means that the customer gets greater competition that should ensure more efficient pricing of power. In turn, the investor gets access to a choice of customers and more prospects for optimising generation and sales.

SN Power has high hopes for deregulation. In the paper, Andersen says that is that if it is trustworthy and well-controlled, deregulation will bring benefits to both the investor and the customers in the developing world. Support in the process is proved by the currently strong drive towards deregulation in the global economy, led by governments themselves and international institutions such as the World Bank.

However, SN Power’s own experiences with deregulation when it entered the Indian market illustrate the fact that risks are still prevalent. India is in the process of deregulation, and lately private Indian companies have started investments in the power sector, suggesting that the market for PPAs is disappearing. But the Asian country has been burdened with problems such as non-paying customers, bankrupt state electricity boards and a massive stealing of power. Consequently, foreign investments have been very small. For a company like SN Power, utilising the vast untapped hydroelectric potential of India in a flexible and competitive deregulated market is very attractive, but these issues that are making investors nervous have not been solved, and therefore the deregulation process is not finalised.

SN Power’s interest in the Allain Duhangan project is as part of a joint venture with the Indian private owned company LNJ Bhilwara. Under the agreement, SN Power has a 49% ownership in Malana Power, which operates the 86MW Malana power plant and is developing the Allain Duhangan project. The International Financing Corporation (IFC) – the private banking arm of the World Bank – stepped in as the main financing institution for the project but, despite the Bank’s enthusiasm for deregulation, still wanted some form of PPA for the project.

So deregulation can still create barriers for private investors in emerging markets with large hydro power potential, and although it is SN Power’s opinion that deregulation actually decreases risks to the private investor and long-term PPAs are no longer a good alternative, in the company’s experience finding project financing has become more difficult. The fact that banks can still demand PPAs even in a deregulated marketplace means the process will continue to be stunted in its attempts to mature and settle.

‘El-Certificate system to promote construction of renewable electricity projects in Norway and Sweden’ by M. H. Gundersen of Norwegian Water Resources and Energy Directorate (NVE) is another interesting financial paper from the conference. It deals with the attempts to integrate electricity certificates (el-certificates) into the hydro power market in the eponymous Nordic countries.

Each el-certificate is worth 1MWh, and is valid for approximately 20 years. The certificates are technologically multi-faced – any renewable energy source is valid from wind, solar, biomass to, of course, hydro power. If Sweden and Norway were to implement the scheme then it could be positive for the promotion of hydroelectricity in the countries, the paper says.

The marketplace for the el-certificates would operate to a conventional structure, which was illustrated as a diagram in the presentation. The certificates would be issued by NVE to renewable energy producers who in turn sell their electricity either directly to an energy supplier or onto the open market. The energy supplier can then use the energy to supply its users with the amount they need, and return the rest of the certificates to NVE, who will then see if the renewable target has been met. All producers would be obliged to have and withdraw a certain number of el-certificates by 1 April every year.

But there are obstacles to overcome before the system can be put in place. The scheme would be all-encompassing for renewable energy: all new hydro power, wind power, bioenergy, ocean-based technologies and solar power. Yet such a wide net means there will be several groups of people to appease, all with different interested parties and various intentions. For hydro power, the common political and environmental questions that follow the resource would arise.

Another challenge concurrent with realising the el-certificates in Norway and Sweden is making the proposal attractive for both countries. Even if hydro is the major source of power for both nations, Norway and Sweden are under different rule, and as such have their own individual agendas; integrating the two separate countries and establishing terms and conditions to suit both is an important and delicate operation. There are different laws, the people of each country may have different ideologies and ideas – the certificates would need to account for all this.

In November 2004, a proposal was made to government for an electricity certificate law to be passed, and NVE was hoping for a decision in summer 2005 for the el-certificates system to start in 2006. However, in February this year there was a meeting between the Swedish and the Norwegian ministers, where it was decided to postpone the common Swedish-Norwegian el-certificates market until 1 January 2007. As a result of this, discussion in the Norwegian parliament was postponed, and is now expected to take place during early spring 2006.

It goes without saying that financial issues are going to figure prominently at any business conference, and Hydropower ‘05 was no exception. Throughout the event there were a great many innovative ideas and exciting schemes that hope to improve efficiency and performance, reduce political tension between countries and environmentalists and help to ensure that hydroelectricity remains among the world’s pre-eminent methods of power generation long into the future.