Report on the progress being made in Germany in the commercialisation of fuel cell based micro CHP. 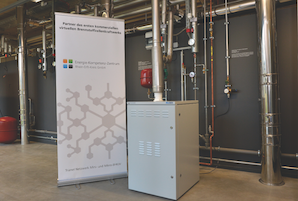 If fuel cell based micro CHP is going to take off anywhere it could well be in Germany. In its latest cashflow report, long-time fuel cell technology developer CFCL notes "strong political support for mCHP in Germany and in particular for high efficiency fuel cell based mCHP", flowing from "the German vision for a low carbon, non-nuclear economy and their understanding that high efficiency distributed mCHP, which can react quickly to the variable demands on the grid, increasingly being imposed by the deployment of intermittent renewables."
Germany’s targets for 2020 include achieving 25% of electricity generation from CHP plants and CFCL says it expects that "mCHP will play a significant role in reaching this goal."

EWE order
In April, CFCL received what it described as a "binding order" for 60 integrated mCHP units from utility EWE (which is owned by German municipalities and local councils), starting the final phase of a development and demonstration programme on integrated mCHP generators agreed with EWE in 2010. Delivery is scheduled for June to December 2013.
Operating this new fleet, say CFCL, will demonstrate the latest product improvements that it and its development partner Gebrüder Bruns Heiztechnik GmbH (Bruns) have incorporated, including enhanced overall control and thermal efficiency. As soon as final design changes are validated, CFCL and its partners will start the certification process and prepare for market introduction. These integrated mCHP units will be CFCL’s second product offering, alongside BlueGen, which is a "power-led" system.
With the new integrated mCHP system, CFCL says it will be able to "target the sizeable and resilient residential demand for heating and heating-replacement units", with commercial product launch expected in 2014.
EWE’s order was conditional upon it receiving partial funding from the German government’s national hydrogen and fuel cell technology innovation programme. EWE is already operating 72 units under the demonstration programme, and has accumulated more than 500 000 operating hours in the homes of customers. From phase one to the start of the final phase, CFCL says it has achieved significant cost reduction, thus bringing the integrated mCHP closer to commercial viability.

NRW subsidy
In late October 2012, North Rhine-Westphalia announced a subsidy scheme for mCHP products, under which the NRW government will pay a capital subsidy to commercial customers and energy service companies who install highly efficient mCHP systems of less than 50 kW. CFCL believes its 1.5 kWe BlueGen and integrated mCHP products are "strongly positioned to take full advantage of this scheme."
The subsidy scheme is part of an NRW government funding programme of up to €250 million to support deployment of large and small scale CHP, and is due to run until the end of 2017. Within this programme a significant amount has been specifically set aside for innovative and highly efficient mCHP technologies of less than 50 kW electrical output, which CFCL’s products have been classed as – achieving an electrical efficiency of 60%, for example.
Based on the first applications under the NRW scheme, approved in mid March 2013, CFCL expects that commercial customers will receive a subsidy of between €9000 and €13000 per unit, dependent on the size of their business. The NRW subsidy is in addition to the German federal government feed-in tariff for mCHP products. CFCL believes that these measures can bring the net price of a BlueGen unit down to a level where commercial customers with an appropriate level of energy use can achieve a payback period of between five and seven years and "as such, we expect this subsidy programme to be a significant driver of sales."
The manufacturing cost of a BlueGen unit (currently about €18000) would of course fall substantially with volume production.
CFCL’s sales strategy is to use both direct and indirect sales channels. In December 2012 it established a direct sales force in Germany to "focus on the opportunities presented in North Rhine Westphalia." The Company is also working to increase its indirect sales channels in Germany through partnering with utilities and installers.
Another step announced in March 2013 was signing of a letter of intent to form a strategic partnership with Alliander AG, German distribution grid operator, based in Heinsberg, NRW. As a first step in this arrangement, up to 600 BlueGen systems are to be installed across Alliander’s regional grids in Germany by 2015, with an initial promotion focusing on 100 units to be installed in Heinsberg. Alliander will augment the existing government feed-in tariff and NRW state capital subsidy with an additional feed-in tariff amount of 10 euro cents per kWh (capped at €5000 over the life of the unit) and an additional upfront capital subsidy of up to €4000 per unit (depending on the customer’s electricity usage profile). "This is expected to make a highly attractive investment return for customers participating in the promotion", says CFCL.
Heinsberg is also the location of CFCL’s facility for manufacturing fuel cell stacks and assembly of BlueGen units. In August 2012 the furnace supplier retrofitted the large furnace at the site with specially designed parts, following which the furnace was then successfully commissioned and used to produce fuel cell stacks through to November. From late December the supplier undertook further work on the furnace (at its own cost) to increase the yield to the level required by CFCL, since when it has been taken through a phased ramp up process.
In December 2012 the plant in Heinsberg successfully underwent its annual accreditation review for the UK Microgeneration Certification Scheme (MCS), which is required to earn the feed-in tariff in the UK.

Virtual power plant
Meanwhile, another municipality-owned power utility, Trianel, as previously reported in MPS, has 25 BlueGen units operating in trial mode as a virtual power plant. A particular attraction of using BlueGen in this way is its flexibility, useful for balancing renewables on the grid, and high efficiency, 60%, as already noted, and without distribution losses. Some 15 municipal utilities as well as the Energie Kompetenz Zentrum Rhein-Erft-Kreis GmbH (EkoZet), are involved in the trials.