Engineering geology can be used as a tool for resolving contractors’ claims, says Leonard B Kassana, Kato Kabaka and Asbjoern Halvorsern. The following paper presents the lessons learned from the Lower Kihansi hydro project in Tanzania, Africa 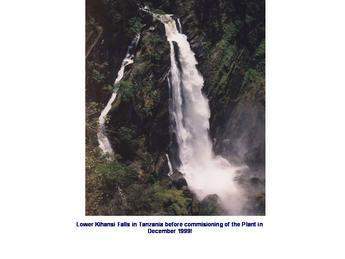 The Lower Kihansi hydro power plant (LKHP), owned by Tanzania Electric Supply Company Limited was commissioned in late 1999. Located on the Kihansi river, a tributary to Kilombero river, the 180MW project currently produces about 32% of all hydro power generation in Tanzania.

The rocks of the area are generally competent gneisses of the Pan African Mozambican (locally known as Usagaran) belt of Precambrian age. The Lower Kihansi area is mainly dominated by medium to coarse-grained granitic/dioritic Gneisses with thin Quatzo-feldspathic bands. Other types are migmatitic gneisses with pegmatitic veins and biotite gneiss.

The rock masses within the Kihansi area are to a varying extent influenced by the tectonic movements of Great East African rift system along the Ududzungwa Scarp as shown in figure 1. The main faults are Normal faults, but strike-slip faults occasionally occur. The orientation of faults is mainly with strike close to E-W and steeply dipping. The reader is referred to Kassana, L.B (2004) comprehensive reading.

Towards the end of the construction period a major topic for analysis and discussion was a claim from the Contractor stating that there was a significant divergence between rock conditions as presented in the tender documents and actual rock conditions encountered.

The contractor, stated that: ‘instead of encountering the expected homogeneous sound rock in the majority of the tunnel length, rock of poorer quality, characterised by high presence of discontinuities, like joints, fractures and fissures, partially associated with weathering process, was encountered.’

In the following sections, a comparison between predicted and encountered rock conditions is given. Factors influencing tunnelling progress are also discussed.

The rock mass classification presented in the said Tender Documents was based on the NGI-Q system, as a tool for assessment of rock support needs. This system is not suitable for assessment of parameters such as drillability or blastability of rock mass. The Contractor then developed his own classification system, meant to reflect blasting conditions more effectively than the NGI-Q system.

The Contractor’s rock mass classification was based on:

• Occurrence of fractures with wall separation > 1mm (open or with infillings).

• Spalling intensity (only incorporated in the rock mass classification in the Power Station).

Encountered versus expected rock conditions of tunnels in terms of Q/values are compared in figures 3-8. These charts illustrate the general experience of the encountered lower portion of poor rock and higher portion of good rock than predicted. The apparent opposite situation for the power house cavern is due to a reduction in one of the parameters for the Q-classification, the stress reduction factor (SRF); due to a rather high activity of rock stress induced spalling in the cavern walls. The mechanical quality of the rock mass is also higher than what was expected.

Further evidence against the claims is explained by the rock support consumption by comparing both actual and contract/tender rock bolts and shortcrete quantities. Two types of rock supports were used to gauge the claim. There was an increase of tunnelling totalling about 1472m in access and bypass tunnels due to relocation of the power house. This increased about 26% in shortcrete but there is a reduction in bolt quantities of 25%. The reasons that can be associated with this discrepancy ie an increase of shotcrete and reduction of rock bolts, include:

• Rock spalling due to anisotropic rock stress pattern in the power house cavern and transformer recesses.

• Relocation of the power station hence an increase of tunnelling totaling about 1472m.

• The rock quality was good enough and hence permanent rock support like rock bolts were not that much needed.

Blasting problems as observed by the engineer

According to the Engineer, the problem here seemed to be explosives which did not detonate correctly. The explosives in most of holes neighbouring the large diameter cut holes were failing to detonate. The cut hole therefore had failed. Explosives with un-detonated detonators were being found in the drill holes. The conclusion inferred was that the failure was connected to the – a responsibility of the contractor.

An observation of the Engineer during the early phase of the tunnelling works was that communication between the different levels in the contractor’s staff was not satisfactory. It was further noted that foremen and the miners were not following instructions given by the contractor’s geologist and engineers.

It was also noted that explosives consumption was much higher from round to round in the early phases of excavating tunnels, but this figure was lowered after drilling booms were changed.

After due consideration of all aspects, the Engineer had to conclude that:

• There was no substantial divergence in rock conditions between what was described in Tender Documents and what was encountered but rather, a general trend of encountered lower portion of poor rock and higher portion of good rock than predicted was experienced. Therefore the Engineer concluded that occurrence of open fractures could not be claimed to be the cause of contractor’s blasting problems.

• Causes for problems were largely, factors within the responsibility of the Contractor. These include: Contractor’s actual blasting as well as charging did not follow the approved blasting and charging plans; unsuccessful blasting with the use of parallel hole cut in the Access Tunnel; Lack of continuous control of the charging by the contractor on the frequent failures of detonating explosives neighboring larger V-cut holes.

• Other causes for serious problems during the tunnels’ excavations in addition to mechanical problems were: Lack of coordination among the contractor’s staff; Lack of experience; Labour strike by the contractor’s personnel.

The engineering geological analysis for Lower Kihansi Contractor’s claims provided information of general interest and gave hints about conditions to be aware of in future projects.