At 750 MWe, Kogan Creek will be about 300 MWe larger than Australia's five previous supercritical coal-fired units, and the biggest single-unit power plant in Australia. 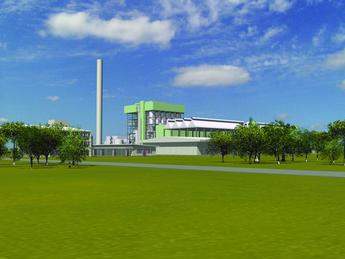 After several years of delay, and a change of owner – when Brisbane-based CS Energy took over full ownership of the project from Mirant, in May 2002 – Kogan Creek is finally moving ahead.

On 20 May 2004, against a backdrop of steadily rising power demand in Queensland, CS Energy (a state-owned enterprise of the Queensland government) announced its commitment finally to go ahead with the project. A few days later the notice to proceed was given to the EPC contractor, a consortium of Siemens Ltd and Hitachi Ltd, while in July, PB Power announced that it had been appointed owner’s engineer, working alongside Sigma Energy Solutions.

The projected commercial operation date for the plant, a key project within the Queensland state government’s clean energy policy, is 24 August 2007.

The plant is located on a greenfield site just outside Chinchilla, 300 km inland from Brisbane in south east Queensland. It will use low sulphur coal from the nearby 300 million tonne Kogan Creek coal deposit, which is also owned by CS Energy. Coal will be supplied to the station via a 4km conveyor belt. Powerlink Queensland is responsible for construction of a 275 kV line connecting the new station to the Queensland-to-New-South-Wales Interconnector at Powerlink’s Braemar substation, located about 16 km south east of the town of Kogan. The plant will operate in baseload mode. The total capital cost of the mine, power station and associated infrastructure is put at US $ 857 million.

While not the first supercritical power plant project in Australia, Kogan Creek, with an installed capacity of 750 MWe, is by far the largest to date, and is in fact the largest single-block power generating unit in the country.

The previous supercritical plants (all, like Kogan Creek, located in Queensland, Australia’s fastest growing state) are the Tarong Energy/TEPCO joint venture’s Tarong North (450MWe), which went commercial in August 2003, Callide C, 2 x 420 MWe, a joint venture of CS Energy and Intergen, which entered service in 2001, and Milmerran, also 2 x 420 MWe, which started up in 2002 and is owned by Intergen (54%), with four other partners. For Tarong North and Callide C the boilers and steam turbines were supplied by IHI and Toshiba respectively, while Milmerran employs Babcock & Wilcox boilers and Ansaldo steam turbines.

For Kogan Creek, Siemens, as EPC consortium leader, is responsible for overall planning, supply of the steam turbine and the generator, and the mechanical and electrical equipment, including the coal feed and ash removal systems, the entire instrumentation and control system, the transformers and switchgear, as well as various auxiliary and supporting systems. Siemens is also responsible for construction, installation and commissioning.

Babcock-Hitachi is supplying the supercritical boiler, which is of the Benson once-through type and will be manufactured under a licence agreement with Siemens.

As well as being supercritical, with steam conditions of 25 MPa/540 °C/560 °C, Kogan Creek will use an air-cooled condenser, meaning that water consumption will be about one tenth of that used by a conventional water-cooled power plant. Kogan Creek will use no more than 1500 megalitres per year of borehole water, principally for the production of demineralised water for use in the water/steam circuit, for the cooling of boiler and steam turbine auxiliaries, and for the site potable water supply. There will be zero water discharge from the site.

Kogan Creek will also use a dense-phase ashing system (as employed at Stanwell and Callide C), allowing ash to be pumped to the mine for disposal together with the overburden in the mine pit in lieu of separate ash storage faciities, a further environmental advantage.

Kogan Creek is the first project based nearly exclusively on Siemens’ Varioplant 700 technology and is therefore an important reference, says the company.

The Varioplant concept, which Siemens has been working on since the early 1990s, aims to reduce investment costs by making use of modular pre-engineered reference coal fired power plant designs, while at the same time providing sufficient flexibility to accommodate specific needs arising from site or customer requirements. The main focus of Varioplant is the turbine building, where all mechanical components of the water/ steam cycle as well as all electrical equipment are optimised around the steam turbine generator set. The modular structure within the turbine island area as well as within the areas outside the turbine building is considered from the outset, thus leaving open the possibility for customisation.

Kogan Creek is a good example of the Varioplant 700 concept in practice. Its turbine building, with the turbine generator at a floor level of 16 m, with no floor below the basement and with overall dimensions of 85.5 x 38 x 36.5 m, shows a clear affinity with the Varioplant 700 reference plant. Kogan Creek is also adopting the heater bay concept, with the main components of the low and high pressure feedwater heating line arranged within the heater bay, which is an annexe of the turbine hall, located between the turbine building and boiler island.

The major adaptations needed were due to the fact that Kogan Creek is a single unit and that it uses air-cooled condensers. While a single unit option was already considered within the Varioplant concept, the incorporation of air- cooled condensers needed some detailed investigations. The fact that this adaptation has proved possible without changing the overall design shows the flexibility of the Varioplant, which is of course one of the major tasks of a successful reference plant concept, says Siemens.