A study from the US Electric Power Research Institute indicates that cracking in divider plate assemblies would not be a safety concern for operating steam generators. 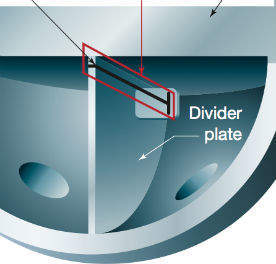 The observed stress corrosion cracking was found in the most significantly strained areas – the weld between the divider plate and the stub runner, and the weld between the stub runner and tubesheet. The SCC has been attributed to several possible causes, including stresses in the weld heat-affected zone, foreign object damage, cold working from the installation process, and weld fusion failures. EPRI began a project in 2006 to determine the safety significance of the findings.

A 2010 EPRI analysis (1020988) showed that PWSCC in divider plate assemblies is not a safety concern. The US Nuclear Regulatory Commission (NRC) agreed with EPRI’s conclusions, but felt more analysis was needed, with respect to long-term operations.

When plants submitted licence renewal applications, the US regulator suggested that although cracking in the divider plate is not a safety concern for operating steam generators, as these steam generators age cracking could propagate to pressure boundary components. That could be, for example, the low-alloy-steel channel head or the tube-to-tubesheet weld.

NRC also issued guidance that plants should consider updating ageing management plans to include divider plate and tube-to-tubesheet weld material. As a result, several US plants have committed to inspect the channel head or the tubesheet welds when they enter the period of extended operation and the steam generators are older than 25 years. (To date, none of the plants that made those commitments have met the time frame requirement, EPRI says.)

In 2011, EPRI also initiated a follow-on project to evaluate crack propagation to the channel head or the tube-to-tubesheet weld, to inform regulatory and nuclear plant decisions regarding the safe extended operation of steam generators. Several scenarios have been put forward, and investigated by EPRI.

In the first scenario cracking (PWSCC) in the divider plate propagates to the low-alloy steel and then completely through the channel head material through fatigue, causing a breach of the pressure boundary. A fracture mechanics analysis using results from three-dimensional finite element modelling concluded that these stresses are not sufficient to propagate a crack over the life of the steam generator (at least 40 years). The structural integrity of the channel head is not compromised.

A second scenario considers crack propagation from the divider plate to the tubesheet weld (pressure boundary), causing primary to secondary leakage. EPRI’s studies found there was a low probability of this occurring. Finite element analysis determined that the dominant mechanical bending loads in the tubesheet-to-divider plate region are in the horizontal plane. The likelihood of these loads turning a crack vertical and causing crack propagation to the tubesheet weld – where it could compromise structural integrity – is low.

Differences in the cladding techniques mean that welds have different properties depending on their location in the tubesheet. This is because the submerged arc weld (SAW) strip cladding process, that is used to deposit filler metal 82 cladding on the underside of the tubesheet is unsuitable for a small, approximately 14-inch diameter region in the centre of the tubesheet forging. This portion of the surface is clad manually using shielded metal arc welding (SMAW) and strip filler metal 182, which has different properties.

Industry has established a chromium content of 24% as a conservative threshold for PWSCC initiation. EPRI’s study of the mockup found that the welds made with FM 82 have sufficient chromium content to be resistant to PWSCC initiation or propagation. However, the welds made with FM 182 (in the centre of the tubesheet) have less than 24% chromium content, so stress analysis was performed for that area. The stress analysis concluded that the centre of the tubesheet is in compression, indicating that the driving force for PWSCC initiation or propagation is not present.
The results of EPRI’s recent study indicated that cracking in divider plate assemblies would not be a safety concern for operating steam generators. EPRI published a final report (3002002850) detailing its findings in October 2014 and is due to submit it to the NRC for review.

Based on the results of its study, EPRI concluded that current steam generator inspection programmes are technically sufficient to ensure structural integrity of the steam generator channel head assembly.