Achieving uninterrupted power supply at all plants operated under Wärtsilä O&M contracts is the ultimate goal of the company’s zero breakdown (ZBD) initiative. 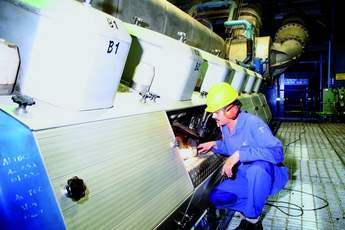 In 1998 Wärtsilä signed its first O&M agreement in India, with Gujarat Ambuja Cements Ltd (GACL), for the 56 MW (4 x 12V46, 2 x 18V32) power plant at Kodinar, Gujarat. Since that day more than 75% of new power plants ordered in the country have been accompanied by an O&M contract.

Switchyard at the Mukand Steel plant

Indeed the success of the concept in India alone gave Wärtsilä the confidence to expand its service portfolio and explore the possibility of providing additional O&M services not only for its own power plants but other manufacturer’s installations too. So, by the end of 2004, Wärtsilä had entered into new O&M agreements for coal-fired steam turbine generator plants. The main objective, however, was to ensure uninterrupted power supply at all the company’s O&M contracted power plants; a task that was to be managed through a new initiative – a zero breakdown policy.

The concept was launched in January 2005 at three pilot power plants in India already under O&M agreements – OPG Energy Ltd, Chennai, Mukand Steel, Kalwe, and Hindustan Zinc Ltd, in Debari. Its effect was immediate improvement in all breakdown criteria,?an outcome that encouraged Wärtsilä ultimately to implement the same initiative at all its plants in India.

Across the board, results were good. With an improvement of 1.03% in overall reliability, 81.6% reduction in mean time to restore power, 76.16% reduction in average forced outage hours during the first year with ZBD at the three pilot plants, the initiative had succeeded in exceeding the boundaries of breakdown definition set at 24 hours for the restoration of power. Nine engines at the pilot plants clocked 60300 cumulative running hours during 2005, without any incident of interruption of generation taking more than 24 hours for restoration.

The contribution to plant revenue was correspondingly impressive. The 1.03% improvement in reliability of the total 69.7 MW capacity meant an increase in annual generation potential of around 6.3 million units, equivalent to 25 million INR (r0.5 m).

As a result of ZBD improvements, Wartsila plants under O&M agreements had achieved, between 1 September 2005 and 31 December 2006, on 132 engines at 632 plants, an increase in overall average reliability from 98.99% to 99.5%, an improvement in mean time between failures from 585.64 h to 831.82 h and an MTTR reduction from 7.05 hours to 4.95 hours: at the same time the number of power generation interruption incidents was seen to have decreased by as much as 30%.

With an improvement of around 0.5% in reliability of the total 650 MW capacity the improvement in the same period in annual generation potential was about 38 million units, worth around 152 million INR (r3 m).

“The ZBD initiative has come at the right time and is ahead of our thinking. It compliments Wärtsilä’s O&M concept for taking care of customer needs by raising expectation levels and delivering continuous improved performance,” said K Sambasiva Rao, general manager (Operations & Maintenance) at OPG Energy Ltd.

The ZBD initiative’s proactive approach is centred on Wärtsilä’s Vaasa plant, from where O&M on the contracted-in plants is managed. It allows the capturing of deviations in plant performance parameters and the solving of problems before they cause an interruption in generation. If there is an interruption, power generation can be restored within a defined period, usually 24 hours.

“When ZBD was first implemented, a few customers thought it was a gimmick aimed at increasing spare part sales. But … it has proved to be a real initiative at giving maximum efficiency. It’s a customer relationship, not a transaction” said senior manager Manaroj Jena, who is closely involved from the owner’s side with Wärtsilä’s O&M services at Hindustan Zinc Ltd.

Mr Jena added that fixing problems as they arise is the norm and does not require any special procedures. “But what is special is that we can now solve the problem before it starts, resulting in better plant performance and increased availability. For operators, a single outage, even for few a seconds, can result in huge losses and this is a way of preventing those losses.”

The ability to set higher performance levels for delivering services to customers is largely attributable to the more efficient way in which power plants are monitored, mainly the reviewing of some crucial areas of activity – housekeeping, operational routines, schedule checking and conditioned-based maintenance routines – in terms of plant specific challenges.

Housekeeping, or autonomous maintenance, was given prominence over other systems in achieving optimum performance from the power plant leading to ZBD, as it was considered that equipment deterioration would be prevented through optimising the schedules for cleaning, inspection and lubrication.

A proactive system approach involves the collection of deviation data and predictive alerts. O&M power plant management improved upon the shift routine with a very comprehensive operational checklist containing alert limits against each parameter and indicator so that all possible errors can be detected in advance by the operating staff and immediate corrective or preventive action can be initiated.

Achievement of ZBD would not be sustainable without improving awareness and harnessing the competencies of the people actively involved. As a result effective coaching came up as the top priority of the power plant agenda

The success of ZBD in achieving improved service reliability has shown up in a number of indicators over 16 months of implementation.

• 77% of plants achieved the set target in average restoration period

For the future, Wärtsilä has set itself a goal of continual improvement. Inherent to the ZBD project is the notion that achieving targets is merely a step towards the next target. In more practical terms, Wärtsilä in India today manages 62 power plants with a total capacity of about 600MW, but the target is 1000 MW, out of the company’s total installed capacity of 3000 MW (HFO and gas) in the country.