Immingham CHP is providing cogeneration on a grand scale, as well as achieving a level of steam supply dependability that is essential for refinery operations. 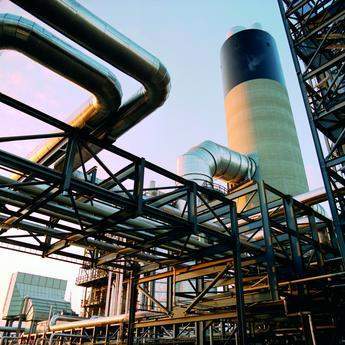 As the source of process steam to two of the UK’s largest refineries, high reliability and operational flexibility have been paramount in the design of the recently inaugurated 734 MWe ConocoPhillips Immingham CHP plant, on the south bank of the Humber in Lincolnshire, UK.

The £350 million plant has four boilers (two HRSGs and two auxiliary boilers, sharing a single four-flue chimney, see photograph, right). Each boiler is capable of supplying more than half of the maximum demand of each refinery, the basic design concept being to always have available 3×50% of the total steam requirements of both refineries combined (ie three of the four boilers in operation at any one time). This means that if one of the boilers is forced to shut down, refinery steam demands can continue to be met – a crucial factor in refinery operation.

The plant is designed to operate in several different modes, exporting anything from 150 MWe to its maximum of 734 MWe to the grid, while maintaining steam supply to the two refineries it serves.

The plant is also flexible in terms of fuel, operating on natural gas but also able to immediately switch to liquids from the adjoining refinery as back-up in the event of gas supply problems.

The combined cycle CHP plant, for which Foster Wheeler was EPC contractor, is equipped with two 260 MWe GE 9FA gas turbine generating sets, each exhausting into a Nooter Eriksen HRSG. Both of the HRSGs have extensive supplementary firing, and in addition there are the two auxiliary boilers. The plant has two Franco Tosi supplied steam turbines, which also generate electricity (115 MWe each), and from which steam is extracted at 50 bar for refinery use. The power plant internal house load is around 20 MWe.

As well as being designed to be one of the most reliable CHP facilities in the world, Immingham is also believed to be the largest “good quality” CHP plant in Europe.

Speaking at the inauguration, Margaret Beckett, UK Secretary of State for Environment, Food and Rural Affairs, said the “government remains committed to its Energy White Paper target of 10 gigawatts of ‘good quality’ CHP capacity being installed by 2010.”

The Immingham CHP alone is estimated to represent about 14% of the remaining capacity needed for the government to meet that goal, although whether this is achievable remains debatable, with the UK CHP Association pointing out that following the commercial start up of Immingham there are, for the first time in many years, no other such industrial CHP plants currently being “planned, developed or commissioned in the UK.”

Nevertheless, ConocoPhillips believes its project “will help pave the way for a new generation of similar CHP plants in Europe.” In the UK, the company thinks there are a “number of major energy centres”, where the Immingham project could be replicated. There could be six or seven similar locations, the company says, where “there are two or three industrial operations close enough to allow CHP developments of 400 MW to 1000 MW, if future economic conditions are right.”

The Immingham CHP plant has its origins in 1998 when ConocoPhillips sought to upgrade the energy supply for its Humber Refinery, which needed more steam. There were also some local grid issues. They could have gone for a small cogeneration project but instead opted for a much more ambitious scheme capable of providing steam both to their own refinery as well as Total’s neighbouring Lindsey Refinery. In addition the facility can provide steam for new industry coming into the area.

“We have managed to overcome one of the major problems of CHP,” says ConocoPhillips, “balancing heat and electricity supply.”

When the idea was first suggested, in 1998, a study was carried out which concluded that if a sufficiently reliable CHP project could be developed, the conventional boilers at the Humber and Lindsey refineries could be replaced by more efficient systems. Lindsey entered into an agreement for the Immingham CHP to provide it with steam, it also co-operated in enabling access to connect the new CHP to the national grid.

The Immingham CHP plant is a fully qualifying scheme as defined under both the UK CHP programme and under the EU Cogen Directive. It has benefitted from UK government measures designed to encourage quality CHP, in particular enhanced capital allowance treatment – allowing accelerated depreciation for tax purposes – and exemption from the climate change levy.

ConocoPhillips finally committed to the investment for the Immingham CHP in early 2002, in the face of very uncertain power and gas pricing, and at a capital cost greater than a conventional power station. For the investment to be made it had to meet the required investment criteria for a risk adjusted rate of return, and this would not have been feasible without the incentives provided by the UK CHP Programme, says the company.

The Integrated Pollution Prevention and Control permit received by the plant was one of the first such permits to be issued in the UK. This process was helped by the fact that the project is a CHP, that it displaces combustion that would otherwise have taken place at the two refineries to produce steam, that it helps recover gas that would otherwise have been flared, and that it re-uses waste water from the Humber Refinery.

As well as enabling the Humber and Lindsey refineries to maintain their competitive positions in the European refining market – reducing utility costs at the Humber Refinery by about 30%, for example – it also reduces their environmental impact. It is estimated that the plant, with an overall efficiency of around 70%, will save about 3 million t of CO2 per year compared with conventional coal fired generation. Among other benefits flowing from the Immingham CHP is its contribution to the energy infrastructure for future much needed industrial development on the South Humber Bank. The area offers what is thought to be one of the best remaining industrial deep water port opportunities in Europe, with about 1700 acres of green field land close to the Immingham CHP available for development. ConocoPhillips has committed £10 million of capital to connect new industrial customers with steam and electricity on the South Humber Bank, an area classified as “EU Zone2”, allowing government funding

to support jobs and investment.